Wallbridge Mining Company Limited (TSX:WM, FWB:WC7) (“Wallbridge” or the “Company”) is pleased to announce continued positive drill results that have extended a known gold zone and have identified an entirely new gold zone with many similarities to the main deposit at its 100%-owned Fenelon Gold Property (“Fenelon” or the “Property”).

Wallbridge Mining Company Limited (TSX:WM, FWB:WC7) (“Wallbridge” or the “Company”) is pleased to announce continued positive drill results that have extended a known gold zone and have identified an entirely new gold zone with many similarities to the main deposit at its 100%-owned Fenelon Gold Property (“Fenelon” or the “Property”).

“These results are significant as they continue to show the considerable potential that exists to increase gold mineralization beyond the known zones at Fenelon along the four-kilometer strike length of the gold-bearing corridor,” said Marz Kord, President and CEO. “The new zone intersected in hole FA-18-051 is located several hundred metres away from the main deposit and has very similar characteristics to the existing deposit.”

“The discovery of this broad gold mineralized system in a so far unknown gabbroic intrusion at depth in hole FA-18-051 is very exciting. This new mineralized system is made up of a stockwork of gold-bearing veins surrounding more focused higher-grade shear zones which are similar to the ones found in the main deposit,” stated Attila Péntek, Vice-President, Exploration of Wallbridge. “This discovery lines up well with a strong break in the airborne magnetic signatures, indicating a significant northwest-southeast trending structure, as can be seen in Figure 3 of this release. This structure also appears to control other, so far isolated, historic gold intersections and represents an entirely new exploration target for our 2019 drill program”

The 2018 underground and surface drill programs were completed before the holidays and drill rigs were de-mobilized. Assay results of several drill holes are still pending and will be reported as they are received in the next few weeks.

The 2019 drill program (50,000-75,000 m planned) has commenced last week with one underground drill rig and with one surface drill rig to follow at the end of the month. The 2019 underground resource drilling will initially be carried out from the recently established 5130 level (~125 m depth) and will target the main high-grade shoots down-plunge to 200 m depth.

The development of an exploration drift is currently underway and will be completed by the end of February. This drift will facilitate resource drilling to greater depth and along strike, including the Tabasco and Cayenne mineralized corridors, as well as the new deep mineralized system discovered in FA-18-051.

The 2019 surface exploration drill program will follow known mineralized zones to 300-400 m depth and test targets further away from the mine workings.

An Orevision surface IP survey to test 600 m strike length of the gold-hosting mineralized environment northwest of the main deposit was completed by Abitibi Geophysics Inc. in February. Results of this study will be incorporated with existing geophysical data into a coherent 3D mode, which will be used to guide geologic modeling and drill targeting.

A summary of the new drill hole results from the ongoing 2018/2019 underground and surface drill programs are reported in Tables 1and 2 and also shown on the Figures below as well as on the Company website. 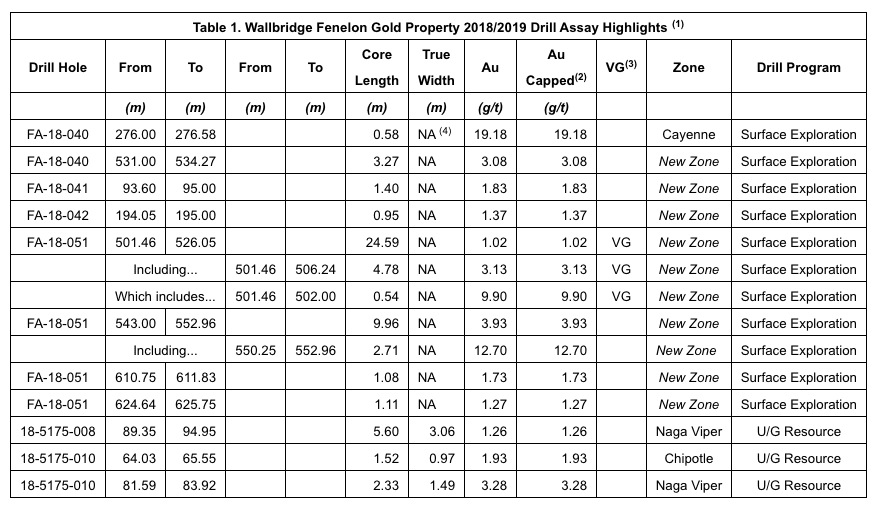 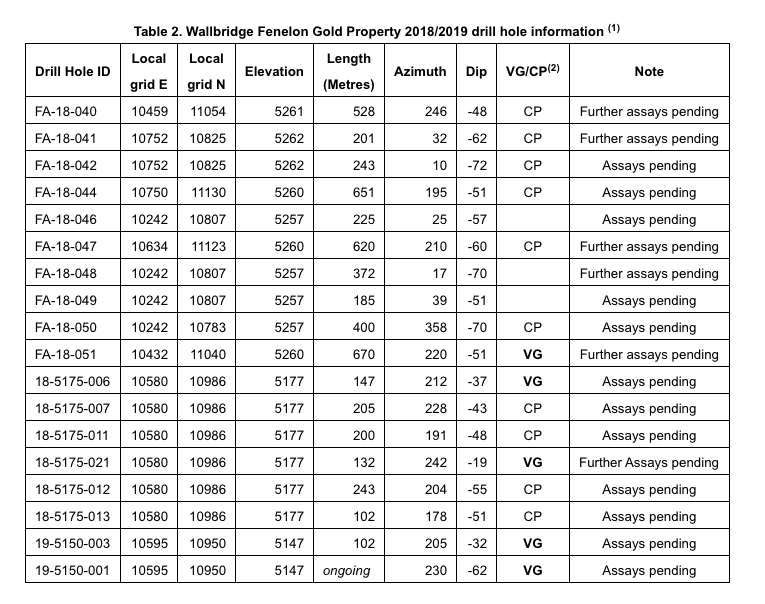 Fenelon is located in northwestern Quebec proximal to the Sunday Lake Deformation Zone (“SLDZ”) which hosts the Detour Gold Mine in Ontario, and Balmoral Resources’ gold deposits at Martiniere. Fenelon hosts the Discovery Zone gold deposit and surrounding 4 km strike length of a gold-hosting secondary splay of the SLDZ.

Since acquiring the property in late 2016, Wallbridge has completed an updated resource estimate and a positive pre-feasibility study on the existing resource. Wallbridge has completed successful surface exploration drilling campaigns in 2017 and in 2018 has commenced an underground 35,000-tonne bulk sample at Fenelon, which will be completed in Q1 2019. Drilling to date has significantly extended existing zones and discovered several new parallel zones. A substantial 2019 exploration and resource expansion drill program is currently underway.

Drill core samples from the ongoing drill program at Fenelon were cut and bagged on site and transported to SGS Canada Inc. Samples, along with standards, blanks, and duplicates included for quality assurance and quality control, were prepared and analyzed at SGS Canada Inc. laboratories. Samples are crushed to 90% less than 2mm. A 1kg riffle split is pulverized to >95% passing 106 microns. 50g samples are analyzed by fire assay and AAS. Samples >10g/t Au are automatically analyzed by fire assay with gravimetric finish or screen metallic analysis. To test for coarse free gold and for additional quality assurance and quality control, Wallbridge requests screen metallic analysis for samples containing visible gold. These and future assay results may vary from time to time due to re-analysis for quality assurance and quality control.

Wallbridge is establishing a pipeline of projects that will support sustainable production and revenue as well as organic growth through exploration and scalability.

Wallbridge is currently developing its 100%-owned high-grade Fenelon Gold property in Quebec with ongoing exploration and a 35,000 tonne bulk sample. Wallbridge is also pursuing other additional advanced-stage projects which would add to the Company’s near-term project pipeline. These discussions benefit from the operating capabilities Wallbridge demonstrated by safely and efficiently mining the Broken Hammer deposit in Sudbury, which was completed in October 2015. As part of this strategy, the Company recently optioned the Beschefer Project, an advanced gold property with proven size and grade-potential near Fenelon Gold. Wallbridge is also continuing partner-funded exploration on its large portfolio of nickel, copper, and PGM projects in Sudbury, Ontario, with a focus on its high-grade Parkin project.

Wallbridge also has exposure to exploration for copper and gold in Jamaica and British Columbia through its 11.3% ownership of Carube Copper Corp. (CUC:TSX-V, formerly Miocene Resources Limited, a Wallbridge spin-out of its BC assets).

This press release may contain forward-looking statements (including “forward-looking information” within the meaning of applicable Canadian securities legislation and “forward-looking statements” within the meaning of the US Private Securities Litigation Reform Act of 1995) relating to, among other things, the operations of Wallbridge and the environment in which it operates. Generally, forward-looking statements can be identified by the use of words such as “plans”, “expects” or “does not expect”, “is expected”, “budget”, “scheduled”, “estimates”, “forecasts”, “intends”, “anticipates” or “does not anticipate”, or “believes”, or variations of such words and phrases or statements that certain actions, events or results “may”, “could”, “would”, “might” or “will be taken”, “occur” or “be achieved”. Wallbridge has relied on a number of assumptions and estimates in making such forward-looking statements, including, without limitation, the costs associated with the development and operation of its properties. Such assumptions and estimates are made in light of the trends and conditions that are considered to be relevant and reasonable based on information available and the circumstances existing at this time. A number of risk factors may cause actual results, level of activity, performance or outcomes of such exploration and/or mine development to be materially different from those expressed or implied by such forward-looking statements including, without limitation, whether such discoveries will result in commercially viable quantities of such mineralized materials, the possibility of changes to project parameters as plans continue to be refined, the ability to execute planned exploration and future drilling programs, the need for additional funding to continue exploration and development efforts, changes in general economic, market and business conditions, and those other risks set forth in Wallbridge’s most recent annual information form under the heading “Risk Factors” and in its other public filings. Forward-looking statements are not guarantees of future performance and such information is inherently subject to known and unknown risks, uncertainties and other factors that are difficult to predict and may be beyond the control of Wallbridge. Although Wallbridge has attempted to identify important risks and factors that could cause actual actions, events or results to differ materially from those described in forward-looking statements, there may be other factors and risks that cause actions, events or results not to be as anticipated, estimated or intended. Consequently, undue reliance should not be placed on such forward-looking statements. In addition, all forward-looking statements in this press release are given as of the date hereof.