Mixed results from the recent report on the state of the US job market resulted gold prices fluctuating, however, the larger driving factor for gold futures may be global inflation pressures from the Chinese interest hike. 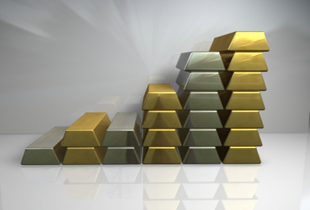 Mixed results from the recent report on the state of the U.S. job market resulted in the fluctuation of gold prices, however, the larger driving factor for gold futures may be global inflation pressures from the Chinese interest hike. Chinese officials raised interest rates for the second time in six weeks, suggesting renewed concerns about runaway inflation and a move towards investments in precious metals. These two factors have been creating a push-and-pull on the market, leaving gold with no clear direction. On Tuesday, U.S. gold futures for April delivery finished up $15.90 at a three-week high of $1,364.10 an ounce.

As reported in the Wall Street Journal, on Tuesday February 8, Federal Reserve Bank of Atlanta President Dennis Lockhart said “inflation anxiety is rising” within the U.S., though price pressures remain low. He added that emerging-market economies, such as China and Brazil, can deal with any inflation pressures building in their own economies. This is the third time China has raised interest rates since October. Gold and other precious metals are traditionally considered hedges against inflation and slow growth.

Federal Reserve Chairman Ben Bernake also asserted that although prices of some “highly visible” goods including food and energy have increased, “overall inflation remains quite low.”

Gold prices fluctuated after the January report on the state of the U.S. job market was released, initially increasing $7.00 to a two-week high of $1,355.80. In anticipation of negative results from the U.S. job reports, demand increased for the traditional safe-haven investment. The value of gold then retreated when Federal Chairman Bernanke said the U.S. recovery still needed federal support. His comments were taken to indicate that U.S. monetary policy would stay accommodative. Gold futures then lost half its gains as investors also showed an increased economic optimism by putting funds in developed markets, causing an additional correction in gold prices.

When the government released its latest jobs report last week, it showed that the nation’s unemployment level had dropped much more sharply than expected. However, the report also revealed that the U.S. economy created only 36,000 new jobs in January, far below the norm for this stage of an economic recovery.

According to an article by Bloomberg, in the past week, Canadian stocks fell in spite of a report showing the nation’s employment rose by 69,200 in January, more than four times the median forecast, adding to evidence the country’s economic recovery may be accelerating.