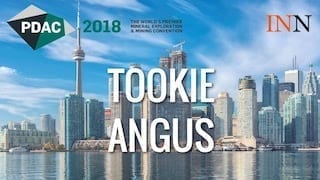 Angus, who has been involved in mining deals worth billions over the last decade, said he sees a golden future ahead for the resource space.

Tookie Angus has been involved in mining deals worth billions over the last decade, and at this year’s PDAC convention he shared his thoughts on what type of company he’s interested in right now.

“Right now I am focusing on discovery stories. We’re back in a discovery drill hole market, which has not happened for, I don’t know how long,” he said, adding, “people are actually paying for stocks off drill hole results. I think that’s an element in this market that has really changed in the last year.”

Angus acknowledged that many of the plays he’s involved in are not accessible to the average investor. “A lot of things I do are quite early stage, and you won’t find me or the companies anywhere,” he said.

Even so, he was able to share some advice for investors. “You’re going to learn things by being [at events like PDAC] … you’ve got to understand what’s going on in this game, and it takes awhile to learn.”

Watch the video above for more insight from Angus, including what metals he’s looking at currently. You can also read the transcript below or click here to view our full PDAC playlist.

INN: We’re here at PDAC, it’s the last day of the conference. You mentioned you haven’t been for quite awhile. What brings you back this year?

TA: Somebody sent me a plane ticket to attend the awards dinner for the best mineral discovery in the world last year. And I was the vendor.

INN: Sounds fair. How have you found the show so far?

TA: Well, I’m surprised. I mean, it really dropped in numbers awhile back, but it’s obviously just gone full bore again. I heard a report of 40,000 registrants. Just quite remarkable.

INN: So there’s a lot of optimism it seems — do you think that’s justified?

TA: Yes, I agree that it is. I think we’re in a very early stage of what’s going to be a particular commodity boom now.

INN: Which commodities are you interested in right now?

TA: First of all, battery metals are very interesting. I also think that one of the really fundamental things is copper, and to electrify the world we need copper. It’s just not cars, it’s everything else. So I’m quite interested in copper properties and transactions.

INN: Let me take you back to the battery metals. It’s kind of a large group of metals at this point, there’s a few in there. [Are there any] that you like specifically?

TA: I had a bit of fun last week with a vanadium play. In Nevada, which is rare, to have grade, size and a possibly pittable deposit in North America. That otherwise is only found in places like China.

INN: Vanadium — that’s not even really an electric vehicle [metal]. That’s batteries as a whole.

TA: No, no, no. The application there … I have some background in alternative power — wind, solar, river. The vanadium storage battery can transform intermittent power into what’s called base power, which is hydro, whatever. It changes the price and it changes the ability to supply it at proper times.

INN: Really interesting. How are you feeling about gold?

TA: I wear it. I’ve been involved with it for over 40 years. I like it. And there’s nothing — I mean, how could you say gold should have the value that it does? I don’t know. Just because of its scarcity, I guess. But you know, I’ve practically made a living out of gold alone for a lot of years. So I like it.

INN: Can you talk to me about some of the companies you like or are interested in right now?

TA: A lot of things I do are quite early stage, and you won’t find me or the companies anywhere. That’s what I do. So by the time they are in the public arena, to me that’s an old story.

TA: Yup. You know, I mean, I’ve had lots of experience with some very successful companies, but right now I am focusing on discovery stories. We’re back in a discovery drill hole market, which has not happened for, I don’t know how long, but it’s happening again. And people are actually paying for stocks off drill hole results. I think that’s an element in this market that has really changed in the last year.

INN: You’ve got a long background in the mining industry. You can get into those very early stage plays quite easily I expect. What about your average investor who’s attending this show?

TA: You know, you’re going to learn things by being here. Unless you’re educated — you’ve got to understand what’s going on in this game, and it takes awhile to learn. I don’t know. I still find this organization somewhat Ontario-centric, and being from the west coast I have views about that. They also had lots of views about me when I showed up in their backyard at Hemlo in the 80s. Anyway.

INN: Any final pieces of advice or thoughts that you would leave people with?

INN: Any cues on when that may respond?