The project was recently acquired by Silver Viper by way of option agreements with a local group of claim holders and with Pan American Silver Corporation (PAAS). Silver Viper awaits full results from the 2018 program and has resumed surface exploration activity on the property. The Company expects drilling to recommence in the first quarter.

Silver Viper’s President and CEO Stephen Cope states, “It is exciting to make a brand-new discovery on a project. The grade, width and potential strike length of El Rubi make this a priority target moving forward. The discovery here validates the ongoing reconnaissance work being done by our team to identify new targets on the project. We look forward to continuing to unlock value in this project and hope this is the first of many new discoveries at La Virginia.”

Results detailed below form the second batch released and represent samples originating from 11 drill holes totaling 2,868m testing four prospect areas: the northern end of Las Huatas, and three never-before drilled targets. A third and final batch of results representing the balance of the 2018 program will be announced once all assays are received and accepted. An updated drill collar plan is available on the Company’s website, www.silverviperminerals.com. 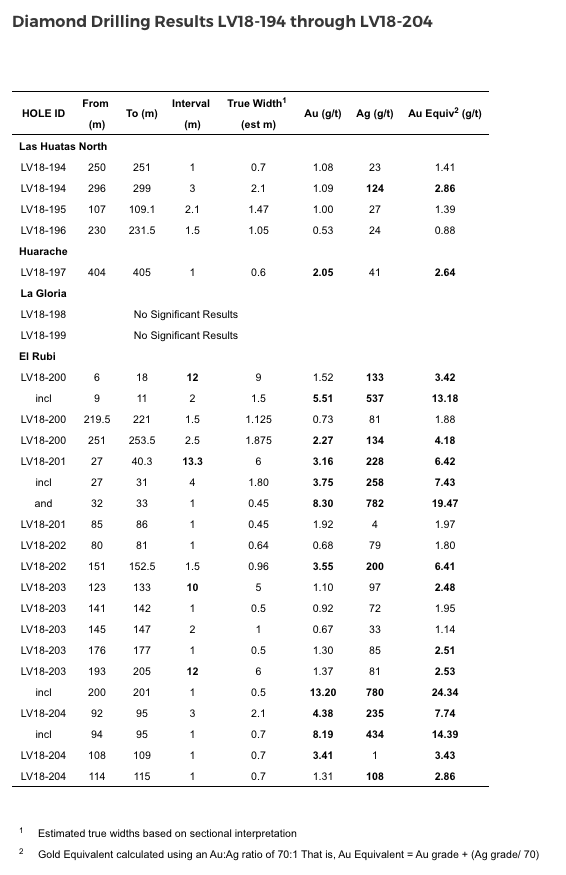 El Rubi
A clear highlight revealed by the data above is the discovery at El Rubi, a newly identified mineralized zone comprising quartz veining, stockwork and breccia located approximately mid-way between La Gloria and the historical drill areas of Campo Santos and El Oriental. The 2018 drilling targeted and intersected a 100m long section of the mineralized trend, open in both directions and ready for follow up work. Silver Viper considers this target area to be the northern extension of the La Virginia mineral system, offset by faulting up to 400m eastward when compared to the main work zone.

The El Rubi structure appears to be laterally extensive, reminiscent of and very likely related to mineralization emplaced at La Virginia. Alteration of host rock and sulphide content at El Rubi are observed to be slightly increased when compared to the intercepts from Las Huatas for example. The prospective structure is interpreted to continue for up to 2km northward, and appears to extend up to 1km southward, and is expected to connect with dyke/veining of a newly identified prospect, Macho Libre. Very preliminary work at Macho Libre includes contour soil sampling and a follow-up reconnaissance chip sample result of 3.62g/t Au from the 2018 routine fieldwork.

Drilling to date is an initial test only, representing 50m spaced sections designed to test a 100m portion along the trend. Mineralization was encountered in all holes, with a best intercept from hole LV18-201 of 13.3m core length (6mestimated true width) averaging 3.16g/t Au and 228g/t Ag for a gold equivalent value of 6.42 g/t gold.

Intercepts in hole LV18-202 and LV18-203 indicate that mineralization extends northward despite little evidence on surface. Similarly, the intercept in LV18-204 indicates that the prospective trend is also open to the south. Silver Viper currently has a field crew collecting surface geochemical samples and prospecting on the southern extension of El Rubi.

Drilling completed represents a very early test of the sub-surface, localized silicification and pyritization of intermediate volcanics were encountered, especially in hole LV18-199. Hole LV18-198 targeted the projection of a silicified zone exploited by small-scale historical artisanal mining activity evidenced by two adits and a shaft.  LV18-199 targeted stratigraphy beneath an intensely silicified, argillic altered ridge oriented perpendicular to the main trend. Highly fractured and intensely altered intermediate volcanics were encountered in both holes and no significant results were returned. Silver Viper intends to advance La Gloria initially through surface prospecting and mapping, positive indications from which would warrant ground geophysics and culminate in further drill testing during 2019.

Huarache
LV18-197 represents a single hole testing the northern projection of El Huarache, some 1.5km southeast of the main La Virginia showings. The prospect comprises a 400m wide zone hosting multiple dacite dykes and some quartz veining observed over a zone 500m long.  Limited work has been completed to date as the showings are in steep terrain difficult to access. The single hole was spotted at a relatively accessible drill site and was designed as an exploratory hole to confirm the presence of dykes and any associated mineralization. Results to date, while not high grade, do confirm mineralization of similar character to La Virginia within the system. Additional work is planned at Huarache for 2019.

About the Project
La Virginia, 220km east-northeast of the Sonoran capital city of Hermosillo, is a large exploration property primarily prospective for fault controlled, low-sulphidation epithermal precious metal mineralization. The property and historical exploration database were acquired by way of option agreements with two distinct parties. Gold and Silver mineralization at La Virginia occurs within breccias, veins and stockworks hosted primarily by andesitic volcanics, often in close spatial association to or cross-cutting pre-mineral dacite dykes and controlled by fractures and faults defining the regional structural trend. The property is currently 37,700ha in size and covers 40km of prospective mineral trend. During 2018, Silver Viper undertook reconnaissance prospecting along the entire trend and is working on claim reduction of the larger, mature claims. The property has strong evidence of intrusive/epithermal activity along the main structural trend.

Dale Brittliffe, P.Geo., Vice President of Exploration is a ‘Qualified Person’ under National Instrument 43-101, and has approved the scientific and technical information contained in this news release.

Silver Viper Minerals Inc is a Canadian-based junior mineral exploration company focused on precious metals exploration in the northwestern Mexican state of Sonora. The Company currently operates the La Virginia Gold-Silver Project. Silver Viper is entitled to 100% ownership of the La Virginia concessions recently acquired from PAAS and has an option to acquire a 100% interest in the Rubi-Esperanza group of claims internal to those concessions. The property was most recently operated by PAAS and is an early stage exploration property, targeting a series of laterally extensive intrusive dykes and breccia zones, hosting low-sulphidation epithermal gold-silver mineralization.  Silver Viper is under management provided by Belcarra Group Management Ltd. which is comprised of highly qualified mining professionals.

On behalf of the board of directors,

Information set forth in this press release contains forward-looking statements. These statements reflect management’s current estimates, beliefs, intentions and expectations; they are not guarantees of future performance. The Company cautions that all forward looking statements are inherently uncertain and that actual performance may be affected by a number of material factors, many of which are beyond the Company’s control. Such factors include, among other things: risks and uncertainties relating to exploration and development, the ability of the Company to obtain additional financing, the need to comply with environmental and governmental regulations, fluctuations in the prices of commodities, operating hazards and risks, competition and other risks and uncertainties, including those described in the Company’s financial statements available on www.sedar.com. Accordingly, actual and future events, conditions and results may differ materially from the estimates, beliefs, intentions and expectations expressed or implied in the forward-looking information. Except as required under applicable securities legislation, the Company undertakes no obligation to publicly update or revise forward-looking information.