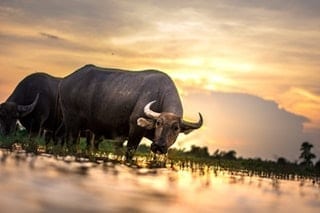 They each gave their input on how high the yellow metal could go in the coming years, with some gold experts giving estimates of up to $10,000 per ounce — much higher than the current price of about $1,325.

Morgan, who publishes the Morgan Report and is best known for his commentary on silver, said gold could rise as high as $10,000 in the future, explaining that the outlook has a historical basis.

McEwen, who’s chairman and chief owner at McEwen Mining (TSX:MUX,NYSE:MUX), is well known for his call for $5,000 gold. Like Morgan, he cited historical statistics, but jumped further back in time.

“There’s a growing demand for gold that could push up the real price as opposed to inflation or the US dollar declining,” Kaiser said. “A real price increase is critical. A move into the $1,600 to $2,000 range is very plausible without it being inflation driven. I think this is going to happen this year.”

At PDAC, Kaiser explained why gold could go even higher in the future. “[If] we take 26 percent of global GDP today, that translates into a $3,300 gold price, which is what people like Pierre Lassonde and Rob McEwen toss about,” he said. “We are in the space where this could happen. Exactly when and how high gold [could go] I have no idea. I just think it’s naturally in that direction — higher real prices.”

Do you think the gold price could rise as high as these gold experts predict? Let us know your thoughts in the comments.