Enforcer Gold Corp (TSXV:VEIN – FSE:N071) (“Enforcer” or the “Company”) and SOQUEM are pleased to report assay results for the first 11 holes of the Phase 2 diamond drilling program on the Mop-II gold-copper deposit.

Enforcer Gold Corp (TSXV:VEIN – FSE:N071) (“Enforcer” or the “Company”) and SOQUEM are pleased to report assay results for the first 11 holes of the Phase 2 diamond drilling program on the Mop-II gold-copper deposit. The Phase 2 drilling program comprised 34 holes totalling 7,646 m. The Roger project is located 5 km north of Chibougamau, Quebec, has all-season road access and is crossed by an active power line that serviced the past-producing Troilus Mine. Enforcer is earning a 50% interest in the Roger project from project operator, SOQUEM.

Highlights from the first 11 holes include:

“The results from the first 11 holes are very encouraging, reporting significant gold-copper mineralization over broad widths within the underexplored North zone. A full compilation and interpretation of the results will be undertaken once the assays from the remaining 23 holes have been received. We look forward to formulating a follow-up program to further advance the Mop-II deposit and build on the current resource.”

“This second phase of drilling will allow us to make a better evaluation of the northern and southwestern parts of the deposit where seldom holes were drilled in the past. Results like in hole 1206-18-108, which is located 50 m east of the conceptual open pit shell, are very encouraging.”

Phase 2 drilling program comprised 34 holes totalling 7,646 m. Approximately 80% of the holes were drilled within the conceptual pits to infill gaps and test the at-depth and on-strike extensions of the known zones. The remaining 20% were exploratory holes targeting potential extensions of the North zone beyond the modelled resource area.

A drill hole location plan is available in the Roger Map Gallery. 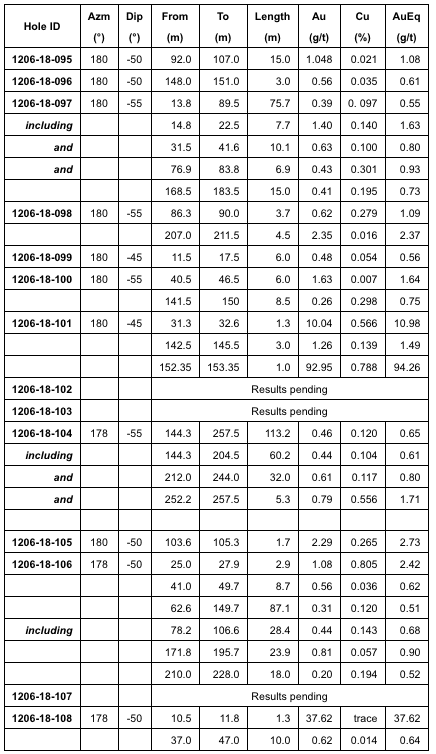 Notes to Table 1:
All holes presented in Table 1 were completed by diamond (core) drilling. Widths represent down hole core lengths; true widths are unknown at this time. Gold equivalent grades (AuEq) were calculated using a US$1,240/oz gold price and US $3.00/lb copper price and do not account for metal recovery.

The 2018 Phase 2 drilling program was managed by project operator, SOQUEM, utilizing standard industry procedures and protocols and following a formal quality assurance and quality control (“QAQC”) program. Core samples were sent to SGS Canada’s sample preparation facility in Val-d’Or, Quebec and sample analyses are ongoing at their analytical laboratory in Lakefield, Ontario, a CAN-P-1579, CAN-P-4E (ISO/IEC 17025:2005) accredited testing facility. Gold grades were determined using a standard fire assay with atomic absorption finish on a 50g pulverized fraction. Samples grading above 5 g/t are re-assayed using fire assay with gravimetric finish on a 50g fraction on the original pulps. Copper was assayed by ICP-OES following a multi-acid digestion. Original pulps from the samples grading above 10,000 ppm are re-assayed by ICP-OES after a 4-acid digestion ore grade analysis. SOQUEM routinely inserts blanks, duplicates and standards in the sample sequence as part of its internal QAQC program.

Enforcer announces the resignation of Antoine Fournier as Vice President of Exploration. Antoine was a highly-valued member of the Enforcer team and the Company wishes him the very best in his future endeavours.

SOQUEM Inc., a subsidiary of Ressources Québec, is a leading player in mineral exploration with its mission to explore, discover and develop mining properties in Quebec. SOQUEM has participated in more than 350 exploration projects and contributed to major discoveries of gold, diamonds, lithium and other mineral commodities in Quebec.

SOQUEM’s Exploration manager, Yan Ducharme, PGeo, is a Qualified person as defined by National Instrument 43-101 and has reviewed and approved the content of this news release.

Enforcer Gold Corp is a Canadian-based mineral exploration company and is earning a 50% interest in the royalty-free Roger project from SOQUEM. Roger hosts the Mop-II gold-copper deposit located 5 km from the historic mining center of Chibougamau, Quebec. The Mop-II contains an Indicated resource of 333,000 contained gold equivalent ounces (10,900,000 tonnes @ 0.85 g/t) and an Inferred resource of 202,000 contained gold equivalent ounces (6,569,000 tonnes @ 0.75 g/t). Details of the mineral resource estimate are provided in the Company’s September 18, 2018 press release and technical report filed on SEDAR. Mineral resources that are not mineral reserves do not have demonstrated economic viability.

Enforcer also holds a 100% interest in the Waswanipi gold project located 125 km west of Chibougamau. Both projects are situated within the prolific Abitibi greenstone belt, which has produced over 180 M oz. of gold and over 450 Mtonnes of copper-zinc ore since the early 1900s.

Enforcer’s President & CEO, Steve Roebuck, PGeo, is a Qualified Person as defined by National Instrument 43-101 and has reviewed and approved the content of this news release.

Click here to connect with Enforcer Gold Corp. (TSXV:VEIN) for an Investor Presentation.