Dunnedin Ventures Inc. (the “Company” or “Dunnedin”) (TSX-V: DVI) is pleased to announce the appointment of Ms. Claudia Tornquist, M.Eng, MBA as the company’s new President. Ms. Tornquist, a senior-level executive, initially joined Dunnedin as an advisor in 2015 and was appointed to the board of directors in 2016.

Dunnedin Ventures Inc. (the “Company” or “Dunnedin”) (TSXV:DVI) is pleased to announce the appointment of Ms. Claudia Tornquist, M.Eng, MBA as the company’s new President. Ms. Tornquist, a senior-level executive, initially joined Dunnedin as an advisor in 2015 and was appointed to the board of directors in 2016. The Company also announces the appointment of Mr. Jeff Ward, P.Geo, as Vice President, Exploration, Mr. Andrew Berry as Vice President, Operations and Ms. Emily McNie as Project Geologist. Mr. Ward, Mr. Berry and Ms. McNie have over 30 years of collective experience in Nunavut, and a successful track record of diamond exploration and discovery.
Chris Taylor, Dunnedin’s CEO said, “We are anticipating a very active 2018 as we drill a number of newly identified kimberlite pipe targets, and also drill to expand our existing diamond resource at our 100% owned Kahuna project in Nunavut. Ms. Tornquist’s experience with Rio Tinto’s Diamonds Group will add breadth and depth of advanced-stage diamond industry experience to a strong exploration team that is currently advised by Dr. Charles Fipke and Mr. John Robins. With extensive experience in Nunavut and a background in diamond exploration and processing, Mr. Ward and Mr. Berry provide operational experience to Dunnedin that will allow the Company to grow through the advanced-stage exploration work anticipated in the new year.”
Claudia Tornquist, Dunnedin’s President said, “I am very excited about the tremendous opportunity Dunnedin has at the Kahuna project in Nunavut and the world-class team Mr. Taylor has assembled. The Kahuna project stands out as an advanced project with proven diamond potential and an existing 4 million carat resource with a clear path to expansion at low cost. In addition, Dunnedin’s large land package provides tremendous exploration upside and numerous kimberlite pipe targets have been identified with the potential for a transformative discovery. 2018 will be an important year to bring the Kahuna project to the next level.”
The new Dunnedin Ventures appointments are as follows:
Claudia Tornquist, M.Eng, MBA, President and Director
Ms. Tornquist’s prior experience includes her role as Executive Vice President of Business Development at Sandstorm Gold, a streaming and royalties company where she financed junior mining companies in the precious metals, base metals and diamond sectors. Prior to that she worked for nine years at Rio Tinto as general manager in strategy, business evaluation and business development roles. In the diamonds sector Ms. Tornquist led the development of a growth strategy for Rio Tinto’s Diamonds Group and she also evaluated and advised Rio Tinto’s Investment Committee on major expansions of the Argyle and Diavik diamond mines.
Jeff Ward, P.Geo, VP Exploration
Mr. Ward has over 30 years of exploration experience across Canada’s north, most recently as President of Kivalliq Energy Corp. (TSX-V: KIV), and will assist Dunnedin will all aspects or program planning and implementation. As Regional Project Manager for Ashton Mining of Canada Inc. he directed diamond exploration in the Northwest Territories, Nunavut and Alberta. As General Manager-Laboratory Services for Ashton and Stornoway Diamond Corp (TSX: SWY), he supervised operations at a 50-person North Vancouver head office and laboratory facility specializing in diamond evaluation. Mr. Ward also ran several on-site DMS plants processing for surface and underground bulk samples at the Renard Project in Quebec, Canada’s newest diamond mine.
Andrew Berry, VP Operations
Mr. Berry has been COO of Kivalliq Energy Corp. since 2010 and will co-manage exploration activities for Dunnedin. He has both surface and underground experience with precious metal, base metal and diamond deposits in South America, Africa and Canada, including mine development with Flanagan McAdam Ltd. and the Muscocho Group in Ontario. As Project Manager with Ashton Mining of Canada Inc. and Stornoway Diamond Corp., Mr. Berry specialized in operational logistics while exploring for diamonds in Canadian arctic environments for over 15 years.
Emily McNie B.Sc, Project Geologist
Ms. McNie has been working in the vicinity of Dunnedin’s Kahuna project as Project Geologist with Kivalliq Energy Corp. since 2011. She will assist with program implementation and will supervise field operations. Ms. McNie’s background includes technical and regulatory reporting and administration of environmental compliance and permitting in Nunavut with a focus on the Kivalliq district.
Update on Plan of Arrangement
In addition to published diamond resources in two kimberlite bodies, and identification of new potentially diamond-hosting kimberlite pipe targets that will be drill tested in early 2018, Dunnedin also announced the discovery of widespread gold in tills across the Kahuna property in 2016, and its intention to spin out gold rights to the project. The project is contiguous with the Meliadine property of Agnico Eagle Mines Ltd. and overlies similar banded iron formation units that also host gold at Meliadine.
The Company notifies shareholders of record on July 17, 2017 that materials related to the proposed Plan of Arrangement (“POA”) to spin out the gold mineralization rights at Kahuna will be mailed out by the close of November, and a special meeting to approve the POA is expected to take place in mid-to-late December, 2017. Details of the POA will be included in the mail out material and will also be announced by the Company at the time of mailing.
Figure 1: Expanded boundaries of the Kahuna project, September 2017. Agnico Eagle’s (TSX: AEM) Meliadine project is contiguous with the Kahuna project and is shown in yellow. 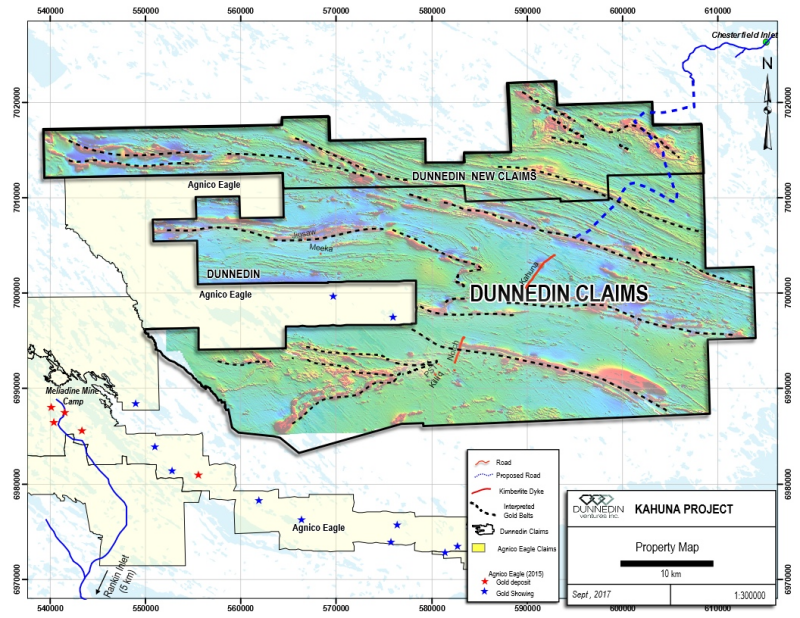 Click Image To View Full Size
Mr. Jeff Ward, P.Geo, is the qualified person responsible for the technical content of this news release.
For further information please contact Mr. Knox Henderson, Investor Relations, at 604-551-2360.
On behalf of the Board of Directors
Dunnedin Ventures Inc.
Chris Taylor
Chief Executive Officer
About the Kahuna Project
Dunnedin’s primary asset is the Kahuna project, where it is completing final steps to earn a 100 percent interest. Kahuna is an advanced stage high grade diamond project located near Rankin Inlet, Nunavut. Dunnedin is now recovering diamonds and indicator minerals from a series of kimberlite and till samples collected from three seasons of field work. An Inferred Resource released by Dunnedin showed over 4 million carats of macrodiamonds (+0.85 mm) at a grade of 1.01 carats per tonne had been defined along the partial strike length of the Kahuna and Notch kimberlite dikes through shallow drilling, and remains open to extension. The largest diamond recovered was a 5.43 carat stone from the Kahuna dike which was a piece of a larger diamond that had been broken during the sample preparation process and was reconstructed as having an original size of 13.42 carats. Recent results include a 2.03 tonne sample of the PST kimberlite dike which returned 223 macrodiamonds totalling 8.17 carats (+0.85 mm) and a 2.36 tonne sample of the Notch kimberlite which returned 89 macrodiamonds totalling 2.38 carats (+0.85 mm).
Neither TSX Venture Exchange nor its Regulation Services Provider (as that term is defined in the policies of the TSX Venture Exchange) accepts responsibility for the adequacy or accuracy of this release.
Statements included in this announcement, including statements concerning our plans, intentions and expectations, which are not historical in nature are intended to be, and are hereby identified as, “forward-looking statements”. Forward-looking statements may be identified by words including “anticipates”, “believes”, “intends”, “estimates”, “expects” and similar expressions. The Company cautions readers that forward-looking statements, including without limitation those relating to the Company’s future operations and business prospects, are subject to certain risks and uncertainties that could cause actual results to differ materially from those indicated in the forward-looking statements.

Click here to connect with Dunnedin Ventures Inc. (TSXV:DVI) for an Investor Presentation