Vancouver, British Columbia – October 15, 2019 – Juggernaut Exploration Ltd. (JUGR.V, TSX-V:JUGR, OTCQB:JUGRF, FSE:4JE) (the “Company” or “Juggernaut”) is pleased to report the newly identified Goldzilla Hinge Zone, the Hinge measures up to 20 meters wide and can be traced for 100m along strike, contains broad high grade gold mineralization and is drill ready. The hinge zone is part of the Goldzilla orogenic vein system that has been traced for 800 metres with a vertical relief of 300 metres and remains open to the South East. Channel cut grades on the Hinge Zone assayed up to 5.86 grams per ton (g/t) gold and 6.00 g/t AuEq (Gold Equivalent) over 12 metres including 5 metres of 13.03 g/t AuEq and 1 metre of 31.66 g/t AuEq true width. The Goldzilla Hinge Zone is located on the Gold Standard property on the central coast of British Columbia, 4 km from major infrastructure.

HIGHLIGHTS OF OTHER OROGENIC VEINS ON GOLD STANDARD

The 2019 program, which included detailed mapping, whole rock geochemistry, channel cutting, drone surveys and prospecting, was designed to expand on the positive results of previous years and to delineate drill targets. This program collected 365 rock samples on the Gold Standard property, in which 78 have gold grades between 0.25g/t Au and 30.6 g/t Au.

This exploration program has further confirmed the extent of gold mineralization within multiple quartz veins and shear zones, within the Big Show High Strain confirming an extensive orogenic gold system within the property.

This mineralized orogenic system is part of a regional high strain zone, a brittle and ductile, sub-vertical shear zone system that is proximal to the boundary between the Intermontane and Insular superterranes, demarked by the Coast Shear Zone. Localization of high strain zones within the system are associated with sheeted, oxidized, sulphide-bearing quartz veins and shear zones that have been identified in outcrop with a strike length of 4.6 km and 1.5 km wide, which remains open in all directions. Discrete gold bearing quartz veins and shears trend up to ~1 km in strike with 500 m of vertical extent and are up to 15 m in width. They host variable amounts of gold mineralization, oxidized pyrite and disseminated pyrite with chalcopyrite. 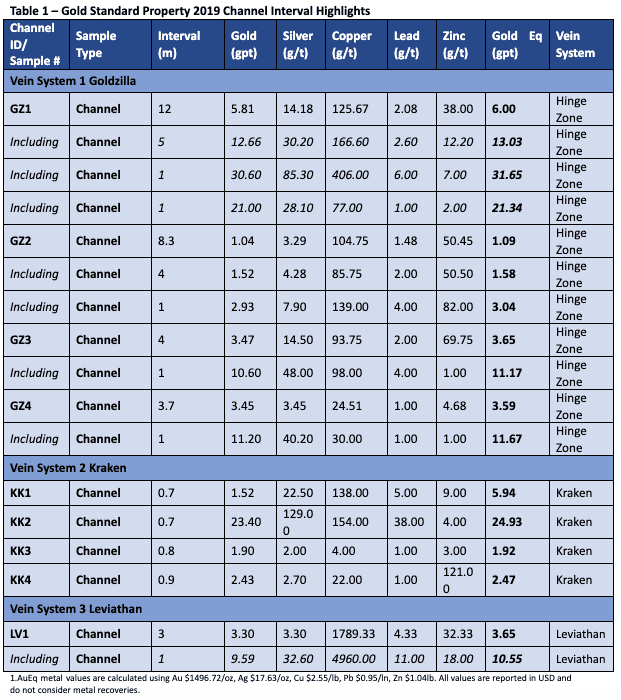 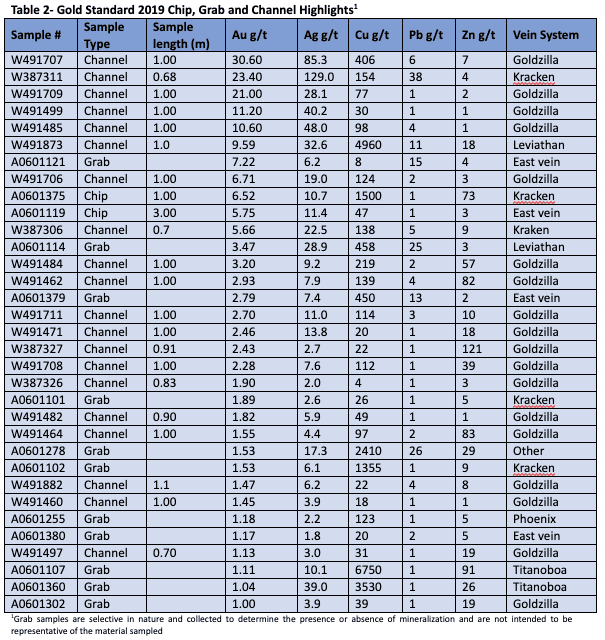 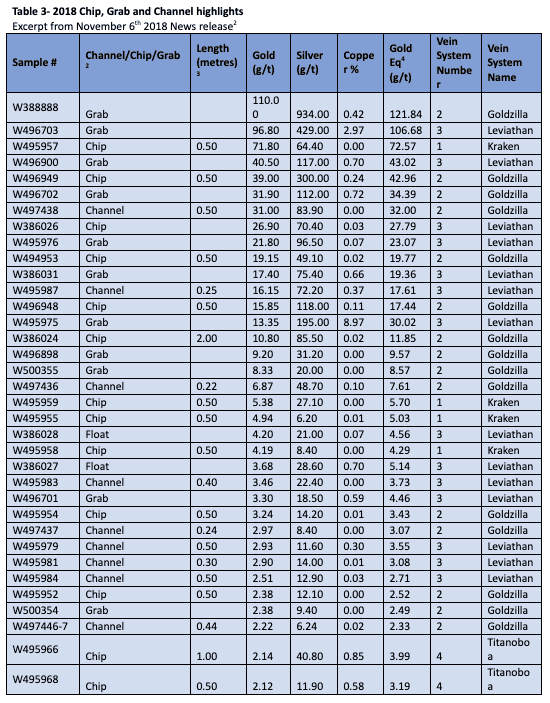 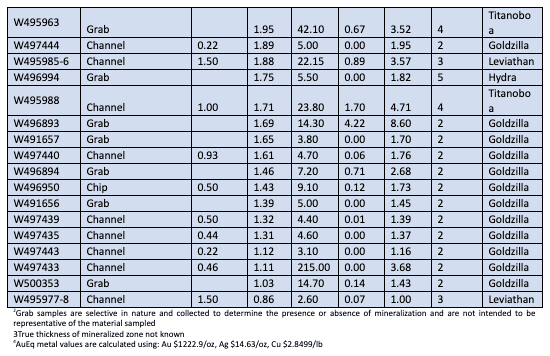 Based on very positive results on the Gold Standard property, a follow-up exploration drilling program is strongly recommended. The inaugural drill program will be designed to test the Goldzilla Hinge Zone both along strike and to depth. The property is in an alpine area with abundant bedrock exposure due to recent glacial and snowpack abatement and is located only 4 km from major infrastructure and 1 km to tidewater and logging roads, providing excellent cost-effective exploration.

“We are very pleased with the results from this year’s program far exceeded our expectations with the discovery of the Goldzilla Hinge Zone and several other high-grade orogenic gold veins on Gold Standard. We have barely begun to scratch the surface with our exploration and are likely seeing just the tip of the iceberg being these orogenic gold systems are commonly mined to depths of 1 to 3 kilometres. This geologic setting and model have proven to host several world class multi million-ounce deposits providing over 67% of Canada’s gold production. Gold Standard is located in a world class geologic setting with excellent potential for additional discoveries both on surface and at depth, all in close proximity infrastructure. We look forward to seeing the value of this project being fully realized with the drill bit in the years to come, it has already garnered the interest of several miners and institutions alike confirming the significance of this discovery.”

Rein Turna, P. Geo. is the qualified person as defined by National Instrument 43-101, for Juggernaut Exploration projects, and supervised the preparation of, and has reviewed and approved, the technical information in this release.

All rock, channel and talus fine samples were crushed and pulverized at ALS Canada’s lab in Vancouver, B.C. ALS is either Certified to ISO 9001:2008 or Accredited to ISO 17025:2005 in all of its locations. The resulting sample pulps were analyzed for gold by fire assay in Vancouver, B.C. The pulps were also assayed using multi-element aqua regia digestion at ALS Canada’s lab in Vancouver, B.C. The coarse reject portions of the rock samples, as well as the pulps, were shipped to DSM Syndicate’s storage facility in Terrace, B.C. All samples were analyzed using ALS Canada’s assay procedure ME-ICP41, a 1:1:1 aqua regia digestion with inductively-coupled plasma atomic emission spectrometry (ICP-AES) or inductively-coupled plasma mass spectrometry (ICP-MS) finish for 35 elements as well as the Au-AA24 lead collection fire assay fusion procedure with atomic absorption spectroscopy (AAS) finish. Any results greater than 100 ppm for silver or 10,000 ppm copper, lead and zinc were additionally assayed using ALS’s OG46 method particular to each element. This method used an HNO3-HCl digestion followed by ICP-AES (or titrimetric and gravimetric analysis). Gold values of greater than 10 ppm Au were assayed by the Au-GRA22 method that includes a fire-assay fusion procedure with a gravimetric finish. QA/QC samples including blanks, standards, and duplicate samples were inserted regularly into the sample sequence.

The reader is cautioned that grab samples are spot samples which are typically, but not exclusively, constrained to mineralization. Grab samples are selective in nature and collected to determine the presence or absence of mineralization and are not intended to be representative of the material sampled.

Certain disclosure in this release may constitute forward-looking statements that are subject to numerous risks and uncertainties relating to Juggernaut’s operations that may cause future results to differ materially from those expressed or implied by those forward-looking statements, including its ability to complete the contemplated private placement. Readers are cautioned not to place undue reliance on these statements. NOT FOR DISSEMINATION IN THE UNITED STATES OR TO U.S. PERSONS OR FOR DISTRIBUTION TO U.S. NEWSWIRE SERVICES. THIS PRESS RELEASE DOES NOT CONSTITUTE AN OFFER TO SELL OR AN INVITATION TO PURCHASE ANY SECURITIES DESCRIBED IN IT.