British Columbia is experiencing a trend of small-scale mines reopening in the province as gold prices continue to climb. 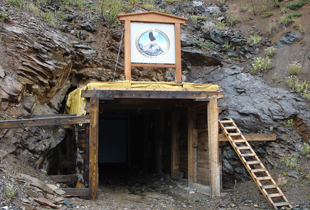 British Columbia is experiencing a trend of small-scale mines reopening in the province as gold prices continue to climb. Although overshadowed to a degree by large-scale open pit copper-gold and copper-molybdenum mines, many former underground precious metal producers in the province are in an economic window of potential profitability with current high metal prices, and as many already have infrastructure in place, companies are pushing to quickly bring some of these projects back into production.

“We’re seeing several projects being reevaluated currently with an eye to reopen, in light of the rise in metal prices that has been going on for six or seven years. I think you can track back metal prices to 2003 when they started to climb, particularly gold,” said Bruce Madu, Regional Geologist for South Central British Columbia. “A lot of mines shut down in BC through the 1990s as metal prices were particularly depressed in that period. I would characterize us as being onto a second or even a third generation for some of the projects.”

There have been 12 mines opened in BC since 2001 and eight in the last five years, including two small-scale vein gold mines in 2009. The most recent gold mine to reopen is the Bralorne Mine, which began producing in mid-April 2011 for the first time in nearly 40 years. Bralorne is a small operation, producing 100 tons a day, and could expand to 280 tons a day by 2013. The mine closed in 1971 when gold was $35 an ounce after producing 4 million ounces in its 50 years of operation. As a past producer, Bralorne had an existing permit, as well as a mill and other infrastructure already in place, allowing production to begin in a matter of months.

“This was not exactly what I’d call turn-key, but a lot of the basic steps had already been done,” said Dr. Matt Ball, Chief Operating Officer and Director of Bralorne Gold Mines Ltd. “I think gold prices can continue going up and more the more exploration we do, the more we’re going to find and the faster we’re going to expand the operation and sustain it longer.”

Although updating a permit can take around six months – as was the case with Bralorne – if financing and developing is required this process can take much longer, sometimes years, before a project can begin production.

“Some of these operations such as Bralorne had a mill in place for years now, just waiting for that right combination of metal prices and adequate resources to restart and I think for many of them they’re feeling that the time is now,” said Madu. “The existing infrastructure is so important.”

Into the future, Ball says that Bralorne predicts two years of production at this particular mine, but the company is pursuing exploration on its property with the goal of expanding well beyond that time.

“If we can keep plugging away and get enough things developed, I can see us expanding eventually and we could go into the old mine area and could be lasting quite long – more than 10 years,” said Ball. “The problem with the vein mines is that it’s very hard to define ore reserves without actually developing the mine to get sample density required to prove up ore. Basically, by the time you have done that you are mining.”

Madu says that this style of operation is quite common for small scale gold vein mines in BC, where a mine life of a couple years is expected, and companies immediately begin looking for the more ore on the property.

“Everybody would like to be beyond two years, but for some of these fast startup ones, you to pay back that initial cost, and then I think the style for these mines is quite often to open up relatively inexpensively, then busy yourself immediately looking for your next few years of ore to keep your hungry mill fed,” said Madu. “The industry is one of opportunism. They will explore wherever they need to find the metals the world needs and wants.”

Part of the startup process in BC requires environmental assessments and regional mine development processes, where the economic benefits of a mining project are weighed with the potential impact. These processes have rejected certain projects for reevaluation, like the Fish Lake “Prosperity Mine” by Taseko because of the impact it would have on the local fish population.

“BC has a very rigorous review process for any mines coming on stream, so it’s well established in legislation that there is a consultation and a referral and an open, transparent process for getting permits through. It involves anybody with an interest in that geographic area or the environment or cultural or historical or even land claims interest,” said Madu.

Small-scale underground mines are typically considered to have a lower environmental impact than open-pit mines, according to Madu, and this typically makes it easier for permitting, especially with historic mines like Bralorne.

“The mine is in a well-established mining area, and the geography of the Bralorne is that it is in a fairly tight valley there so it’s fairly well constrained to potential impact, said Madu. “Their biggest impact could be on discharges into area creeks and whatnot and the ministry of the environment has a long history of familiarity with the project so they are making their way through their required permitting for waste discharge.”

Mining companies must also work with local First Nations groups, as part of the review in determining among other things, the environmental impact of the mine the potential for employment or training opportunities.

“I think these days it’s getting harder and harder to develop mines in BC because of the First Nations issues. There’s a lot of negotiations that had to be done, so that adds more time into the development. We really just got in because of the work that was done previously,” said Ball, though notes that Bralorne received approval quite quickly from the Lillooet tribal council both because of the relatively small size and the history of the mine.

“We tend to have more intense requirements around aboriginal consultation here than other parts of Canada as we have a largely untreatied situation,” said Madu. “First Nations have different rights than they might have in other parts of Canada around exercising their political activities and claims on titles, so that’s an area that BC is still learning and growing into.”