Altamira Gold Corp. (TSXV:ALTA) (FSE: T6UP) (OTC Pink: EQTRF), (“Altamira” or the “Company”) is pleased to report that it has been granted an additional 42,000ha within the Apiacas district in Brazil, located close to the northern margin of the Alta Floresta Belt, which is in contact with sediments of the Cachimbo Graben.

Altamira Gold Corp. (TSXV:ALTA) (FSE: T6UP) (OTC Pink: EQTRF), (“Altamira” or the “Company”) is pleased to report that it has been granted an additional 42,000ha within the Apiacas district in Brazil, located close to the northern margin of the Alta Floresta Belt, which is in contact with sediments of the Cachimbo Graben.

The Alta Floresta Gold Belt has historically produced an estimated 7-10Moz of placer gold which led Altamira to build up a large land position on several project areas previously identified by the artisanal miners In September 2017, Anglo American and Nexa Resources staked a total of 3.5M ha within the belt following the reported discovery of a porphyry copper deposit at Jaca by Anglo American, and academic research studies by The Geological Service of Brazil and the University of Campinas in late 2015. Codelco, subsequently acquired an additional 800,000ha in the belt. Altamira remains the largest junior license holder in the area.

The Apiacas district is located in the north-west part of the Alta Floresta Gold Belt and was one of the most prolific historic placer areas in the belt having produced an estimated 1Moz of placer gold. Altamira has completed some previous surface exploration work at Apiacas which has identified a number of prospective targets including Papagaio, Osmar, Bragatte, Paulinho Troca- Tiro, Casa Branca, Joao Fidelis and Mutum. Thus far, Altamira has completed no drill program on any of these targets. 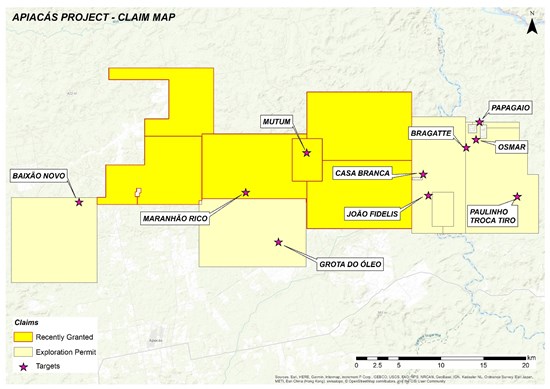 Surface rock sampling completed in the eastern claim blocks at Apiacas by Altamira has so far identified several targets with high grade gold values on surface (Figure 2). These include; 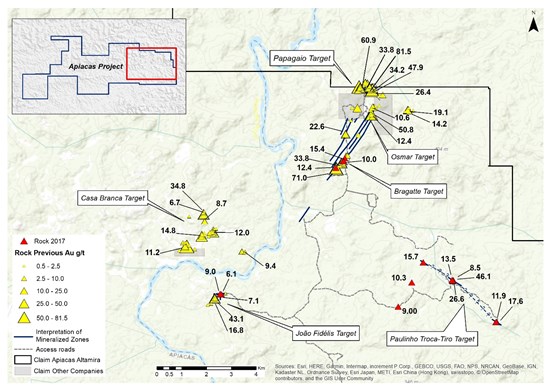 Gold mineralization at all of the above targets appears to be confined to high-grade structures.

The airborne magnetic data from the area (Figure 3) shows that the Papagaio, Osmar, Bragatte and Joao Fidelis targets all appear to be controlled by a pronounced NE trending structure extending over approximately 15km. The outcropping gold mineralization at the Papagaio target appears to be situated very close to where this NE trending structure transects a boundary between two distinct magnetic domains which likely represent a change in rock type.

The Paulinho Troca-Tiro target appears to be largely controlled by a NW trending structure which may extend up to 5km (Figure 3).

No drilling has thus far been conducted on any of the above targets. However, an estimated 90% of the placer gold that was mined in the district was obtained from a target area called Mutum in the central part of the district and within the claims recently granted to Altamira. 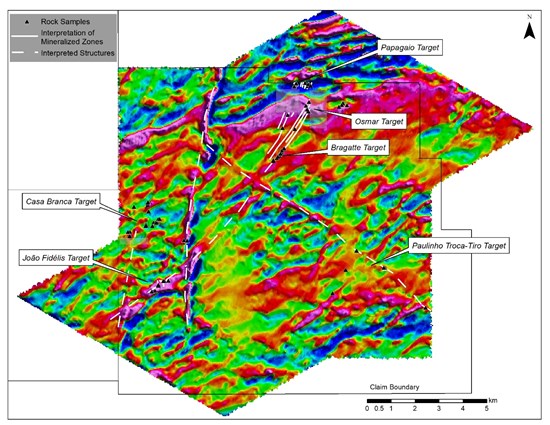 As outlined above, the Mutum target area is estimated to have produced at least 90% of the placer gold within the Apiacas district. Unlike the other known targets that are described above, the Mutum target is characterised by widespread quartz-sericite-pyrite alteration of granitic rocks with minor quartz veinlets (Figures 4 and 5) which extends over at least 4 square kilometres. Artisanal mining of this altered material has taken place at several places suggesting that the altered and pyritized rocks contain gold. This suggests that a large disseminated gold deposit may be present at Mutum.

A program of geological mapping and sampling is currently in progress with results expected later in February. 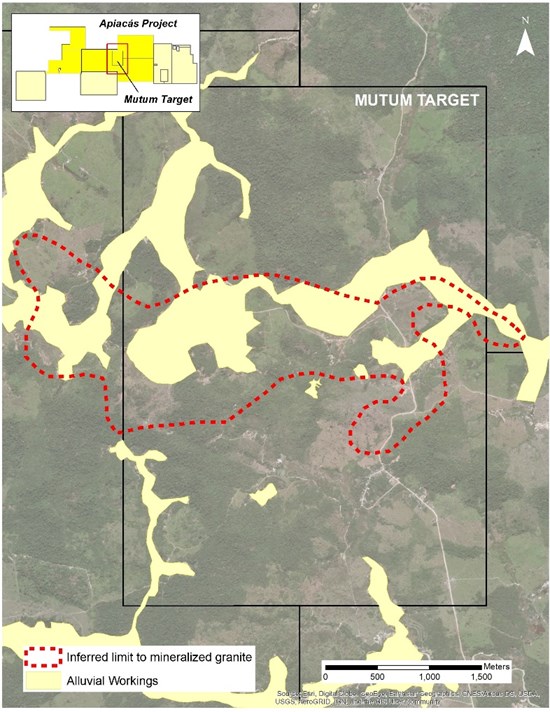 Figure 4: Map showing Mutum target at Apiacas with distribution of placer gold workings which produced an estimated 90% of the gold from the district, and the inferred limit of quartz-sericite pyrite alteration 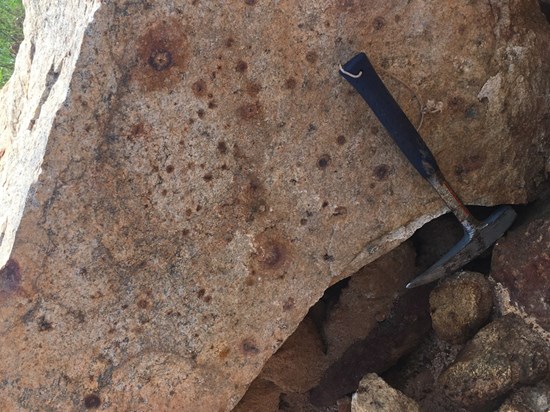 Figure 5: Quartz-sericite-pyrite alteration from Mutum target, Apiacas. Note pyrite clots. This type of mineralization is widespread at Apiacas and has been previously mined by artisanal miners

Michael Bennett Altamira Gold’s President and CEO commented “We are extremely pleased to have been granted an additional 42,000 Ha within the Apiacas district, which is one of the largest historic producer of placer gold in the Alta Floresta Belt. Limited surface sampling to date has already identified a number of high-grade targets, but the recognition of widespread hydrothermal alteration and disseminated pyrite mineralization at Mutum which produced an estimated 90% of the placer gold at Apiacas, also opens up the possibility of a larger body of disseminated mineralization.”

The Company also announces that it has granted 1,075,000 stock options to directors, officers and employees of the Company. The stock options are exercisable for a term of five years at an exercise price of $0.10 per common share under the terms of the Company’s Stock Option Plan.

The Company is focused on the exploration and development of gold deposits within western central Brazil. The Company holds 12 projects comprising approximately 300,000 hectares, within the prolific Juruena gold belt which historically produced an estimated 7 to 10Moz of placer gold. The Company’s advanced Cajueiro project has an NI 43-101 compliant resources of 8.64Mt @ 0.78 g/t Au (for 214,000oz) in the Indicated Resource category and 9.53Mt @ 0.66 g/t Au (for 204,000oz) in the Inferred Resource category and an additional 1.37Mt @ 1.61 g/t Au in oxides (for 79,000oz in saprolite) in the Inferred Resource category.