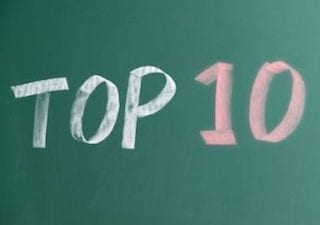 China was in first place in 2016, followed by Indonesia and Burma. Read on to find out the rest of the top tin-producing companies last year.

Tin was 2016’s second best-performing metal, behind only zinc. But the tin price had a poor start in 2017, largely due to uncertainty surrounding China’s export policies.
Even so, analysts expect that increasing demand from the electronics industry and a decrease in supply will sustain the tin price this year. Indeed, world tin production dropped more than 3 percent in 2016, clocking in at 280,000 MT compared to 289,000 MT in 2015.
To give investors a better idea of the tin supply landscape, we’ve put together a list of last year’s top tin-producing countries, based on statistics from the US Geological Survey. Read on to learn more about those countries and their contributions to the tin industry.

Production: 100,000 MT
China remained the world’s largest tin-producing country in 2016 by far, although its output dropped slightly, coming in at 100,000 MT compared to 2015’s 110,000 MT. China also holds more than 1 million MT of tin in reserve, the largest amount worldwide.
Tin industry body ITRI confirmed in mid-January that China has removed its export duty on tin. The 10-percent tax was imposed in 2008, decreasing the country’s tin exports significantly. ITRI commented that the removal of this barrier to trade “will have global significance.”

Production: 55,000 MT
The world’s second-largest tin-producing country last year was Indonesia, which increased its output by 3,000 MT to hit 55,000 MT.
During 2015, stricter regulations, flooding and the closure of smelters impacted the country’s exports, and they declined 25 percent, according to the US Geological Survey. However, ITRI has said that Q1 2017 was robust for the country, with tin exports up 86 percent year-on-year. The increase was supported by a smoother permitting process.

Production: 26,000 MT
Brazil’s tin production remained fairly flat in 2016, clocking in at 26,000 MT. According to the Brazilian tin association, Sindicato Nacional da Industria da Extracao do Estanho, refined tin production in the country fell 1.6 percent, to 11,663 tonnes, over the same period.
Minsur’s Brazilian subsidiary, Taboca, remained the country’s top producer of both tin ore and metal in 2016, with mine production of 6,864 tonnes and refined tin output of 5,873 tonnes. White Solder was the second-largest refined tin producer in the country last year, with output of 2,731 tonnes; metal production by other smaller producers was estimated at 3,000 tonnes.

Production: 20,000 MT
In 2016, tin output in Bolivia was exactly the same as in 2015, at 20,000 MT. According to official statistics from the Bolivian ministry of minerals and metals, refined tin production in the nation rose 8.7 percent last year to reach 16,810 tonnes, despite a drought and delayed investment.
ITRI forecasts that production in Bolivia could see a short-term recovery in 2017, but medium-term prospects for Bolivian tin production will largely depend on “successful implementation of maintenance and expansion projects at Bolivia’s state-owned mine operations.”

Production: 18,000 MT
Peru remained one of the world’s top tin-producing countries last year despite a slight decrease in output. Last year, the country’s total tin production hit 18,000 MT, a drop from 2015’s 19,500 MT. In addition, the South American country was the primary supplier of tin to the US.
Minsur, a top tin-producing company that also mines gold, owns the San Rafael mine in Peru, which it bills as South America’s largest tin-producing mine. San Rafael has been operated by Minsur since 1977, and today produces 12 percent of the world’s tin. Minsur also holds a smelter and refinery, where it completes the tin production cycle.

Production: 7,000 MT
Next on this list of top tin-producing countries is Australia, whose total output remained flat compared to 2015 at 7,000 MT.
More than 85 percent of Australia’s economic tin resources are located at the Renison Bell deposit in Tasmania, operated by Metals X’s (ASX:MLX) Bluestone Mines. Australia’s next most important mine is Talison Lithium’s (TSX:TLH) Greenbushes mine, where tin is recovered along with tantalite (a tantalum mineral) from a weathered primary deposit.

Production: 5,200 MT
In 2016, the Democratic Republic of Congo’s tin output was 5,200 MT, down more than 18 percent compared to 2015’s 6,400 MT. In the Democratic Republic of Congo, armed groups earn hundreds of millions of dollars every year by trading conflict minerals such as tin.
In 2010, US Congress passed the Dodd–Frank Wall Street Reform and Consumer Protection Act, which includes a provision, Section 1502, that mandates that companies listed on American stock exchanges disclose whether their products contain conflict minerals. But this act could change soon — it is set to undergo a review following an executive order made earlier this year by US President Donald Trump.

Production: 4,000 MT
Malaysia rounds out the list of the world’s top tin-producing countries for 2016. It produced 4,000 MT that year, up from 3,800 MT in 2015.
Malaysia Smelting is the second top tin-producing company in the world. The company is over a century old, and has been a key integrated producer of tin and tin-based products, as well as a leader in custom tin smelting, since 1887. It is a subsidiary of Singapore’s The Straits Trading Company (SGX:S20), and has a number of its own wholly owned subsidiaries; Malaysia Smelting also holds interests in several other companies.
Don’t forget to follow us @INN_Resource for real-time news updates!
Securities Disclosure: I, Priscila Barrera, hold no direct investment interest in any company mentioned in this article.