Molybdenum is increasingly being favored by scientists looking to create cheap and efficient hydrogen power. 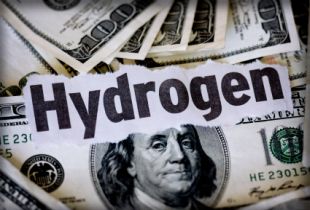 Is the key to the future of clean energy reliant on molybdenum?

While the vast majority of molybdenum is used as an alloying agent in steel production, many new markets for the metal are starting to emerge. Molybdenum is being used in new CIGS solar panels that are revolutionizing the solar industry. These panels are thin and flexible, and have the ability to lower costs of electrical generation dramatically. As such, CIGS photovoltaic systems are starting to take off. Moly’s uses in new energy applications only starts to beings here.

The newest and most promising technology, with breakthroughs from researchers at multiple universities, is hydrogen power generation.

Traditionally, pure hydrogen is created through two methods. The first is to separate hydrogen from methane and hydrocarbons. This method is counterproductive to ‘clean energy’ simply because the burning of methane to create energy is more efficient than using the hydrogen that is separated from it.

The second method is to separate hydrogen atoms from oxygen atoms in water, through a method called electrolysis. In existing electrolysis systems the electrical current is run through a platinum electrode. However, platinum is an extremely expensive metal, and currently valued at $1768.00 per ounce. The use of platinum to economically produce hydrogen is a pipe dream. However, molybdenum may revolutionize what some call the “hydrogen economy.”

Researchers at UC Berkeley, as well Swiss scientists at EPFL, are developing molybdenum as a substitute for platinum electrodes. At 70 times cheaper than platinum, molybdenum-oxo is rising as an alternative that can perform in either dirty water or salt water. “Our catalyst does not require organic additives, and can operate in neutral water, even if it is dirty, and can operate in sea water, the most abundant source of hydrogen on earth and a natural electrolyte. These qualities make our catalyst ideal for renewable energy and sustainable chemistry,” stated Hemamala Karunadasa, one of the co-developers of the technology at UC Berkeley.

Another scientific discovery that uses molybdenum to generate hydrogen has come from researchers at the University of Stanford and the Technical University of Denmark, is truly amazing. They have produced a nano-technology molybdenum-sulfide electrode that can crack hydrogen from water not with electricity, but with sunlight.

“The process is called photo-electrochemical, or PEC, water splitting. When sun hits the PEC cell, the solar energy is absorbed and used for splitting water molecules into its components, hydrogen and oxygen… “Molybdenum is an inexpensive solution,” stated Ib Chorkendorff.

The technology employs nano electrodes coated with the molybdenum sulfide material. You can watch a video of hydrogen gas generation from light at here. If the researchers can find a way to mass produce this technology economically, a massive market will open for molybdenum. Jens Norskov, one the scientist behind the technology commented, “A sustainable energy choice that no one can afford is not sustainable at all.”

The use of molybdenum in various nano-technologies was covered on Moly Investing News in February. The nano-technology that employs molybdenum in high tech products could make computers smaller, faster and more efficient. There are even inventions where molybdenum nanotech could capture lost heat energy in gas and coal fired power plants which lose 50-70 percent of the energy produced in the form of heat.

Undoubtedly this technology is still far from becoming a household reality. In the case of Stanford’s sunlight powered hydrogen generation, they are looking for other catalyst materials to further reduce costs. However, many breakthroughs using molybdenum provide moly with new, diversified markets that could add significant amounts demand.

6 responses to “Molybdenum as a Clean Energy Option”