Moly prices today are holding fairly steady since a steep June drop off.

At the end of 2014, moly market watchers were predicting positive price action for the metal at the beginning of 2015, with lower prices taking over in the latter half of the year.
As it turns out, those predictions were correct, but only to a point. As the below chart from the London Metal Exchange shows, moly prices ticked upward very briefly at the start of 2015, only to fall steeply later in Q1. And while prices for the metal were able to hold steady during Q2, at the end of June they plunged steeply again.
In terms of moly prices today, one bright side is that since that June drop off, they are steady once again. Most recently, Platts reported midway through September that the daily European ferromoly price was level at $14.40 to $14.80 per kilogram.
Oxide prices were faring less well at that time, and were assessed at $5.55 to $5.70 per pound, down from $5.60 to $5.75. And unfortunately, little improvement is expected in that arena in the near term — as one seller told the news outlet, market participants “know the oxide price is coming down.” 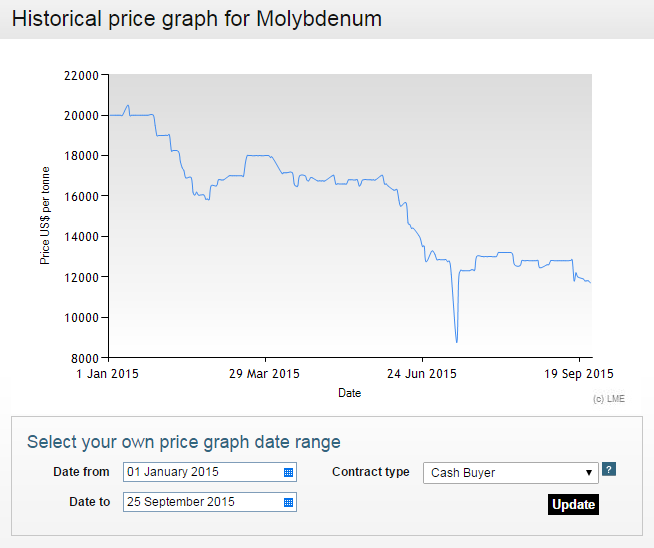 ACCESS REPORT
While that might sound bleak, it’s worth noting that the long-term outlook for moly prices is positive. One report published at the end of last year states that China’s moly consumption will hit 120,000 tonnes in 2015, reaching 135,000 tonnes by 2020. And though supply is also expected to rise, the report concludes that a healthy increase in both supply and demand could lead to “a price rebound by [2020].”
More recently, CPM Group said that while a “[l]ooming surplus” is likely to keep prices subdued through to 2016, after that the outlook for the metal becomes a little brighter.

Last week, MOAG Copper Gold Resources (CSE:MOG) provided an update on the drill campaign at its Ireland-based Mace moly-copper project. Since July, the company has drilled 1,920 meters out of a planned 5,000 meters, focusing on an altered, northeast-trending zone of mineralization.
At this point, nine holes have been completed, and results for two have been received. According to the company, they point to “significant molybdenum-copper-silver mineralization.” MOAG believes Mace has the potential to grade 0.1 percent moly plus 0.07 percent copper.
Also last week, Alloycorp Mining (TSXV:AVT) announced that President and CEO Gordon J. Bogden has resigned as CEO to pursue other interests. He will also step down from his position on Alloycorp’s board of directors.
Alloycorp is focused on the British Columbia-based Avanti Kitsault project, which it expects to bring into production in 2017. The company anticipates Avanti Kitsault becoming one of the world’s four top primary moly mines, with average annual production of 11,300 tonnes of moly and over 1 million ounces of silver.