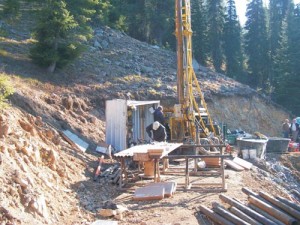 Drill rig at CuMo in Idaho.

American CuMo Mining (TSXV:MLY), whose aim is to become one of largest and lowest-cost primary molybdenum producers in the world, took another step toward that goal with Tuesday’s release of drill results from the 2012 diamond-drilling program completed at its Idaho-based molybdenum-copper CuMo project last November.

CuMo’s press release states that a total of 4,700 meters were drilled in nine holes both at the extremities of the deposit, mainly to gain geotechnical information, and “as infill to improve resource confidence.” Interior hole highlights include:

These results confirm “the excellent grade continuity of the mineralized zones,” according to the company.

As Shaun Dykes, CEO of American CuMo, told Moly Investing News in February, the CuMo project, which is a molybdenum-silver porphyry, is one of the largest molybdenum projects in the world, holding over 4 billion pounds of molybdenum, more than 8 billion pounds of copper and 386 million ounces of silver. It matches up to the Bingham Canyon mine, according to Dykes, and the company thinks it will be the lowest-cost producer.

The company hopes to produce a bankable feasibility study for the project in the three to four years.

American CuMo also notes in its release that its rebranding efforts are shaping up nicely, stating that it has updated its corporate materials and is engaging in innovative marketing campaigns.

That’s positive news for the company, which recently changed its name from Mosquito Consolidated Gold Mines after emerging from a lengthy proxy battle. As Dykes explained, “we wanted … to give [the company] a new start and a new presence.”

CuMo is currently in discussions with groups in North America, Europe and Asia that are interested in funding the project through to feasibility. With shares of US-based molybdenum miner General Moly (TSX:GMO,AMEX:GMO) down 56 percent year-to-date on the back of its inability to secure a second partner to finance its Mount Hope project, the fact that CuMo is engaged with interested parties bodes well.

Editorial Disclosure: American CuMo Mining is a client of the Investing News Network. This article is not paid-for content.