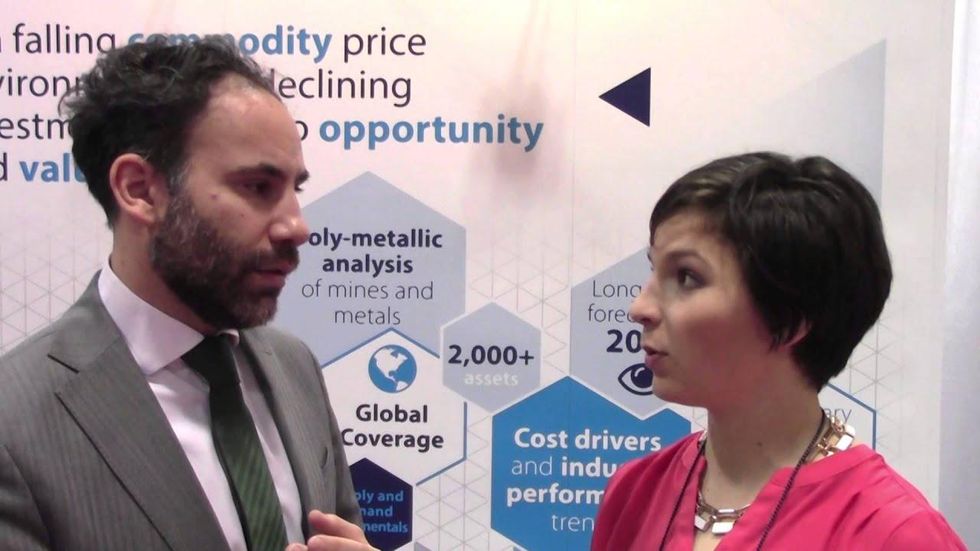 At PDAC, Resource Investing News spoke with Jonny Sultoon of Wood Mackenzie about some of the key factors driving the coal market. Overall, he sees “possible price floors being reached” in 2015, with met coal sitting around $114 to $116 per tonne and spot Newcastle thermal coal prices coming in at $62 to $64 per tonne.

Sultoon spoke about a range of topics, from demand from China and India to take-or-pay contracts in Australia and reports that Glencore (LSE:GLEN) will cut production in the face of oversupply. Overall, he stated that Wood Mackenzie sees coal demand falling in China this year on the back of environmental protection movements and protectionism regarding China’s domestic coal industry. However, he also suggested that there could be more growth for the import market in India.

Sultoon still believes there’s a bit of work to be done in curtailing oversupply in both the thermal and metallurgical coal spaces. For 2015, he sees possible price floors being reached, with met coal dropping to $114 per tonne and coming back to $116 per tonne by the end of the year. On the thermal coal side, he sees spot Newcastle thermal coal prices averaging at $62 to $64 per tonne this year.

RIN: I am Teresa Matich with Resource Investing News. Here with me today at PDAC is Jonny Sultoon, Research Director for Global Coal Markets at Wood Mackenzie. Jonny, thank you for joining me.

RIN: So, to start off, both thermal and metallurgical coal prices have been under pressure for some time. Could an uptick from demand from China and India help turn that around?

JS: Yeah, that could be. We don’t see that in China this year. We actually see Chinese demand falling in 2015 versus 2014 levels. China’s gone through quite a raft of changes over the last six months that are actually quite negative towards the importing side for both thermal coal and metallurgical coal – really, I think [those were] movements around environmental protection, but also domestic protection of its industry. So we see that really pushing demand down into 2015 versus 2014.

India on the other side, yes, that’s where a lot of the market is focused on growth. India is going through a process where they are reallocating some of their domestic coal blocks, rebidding them out through the months of February and March. This process might take a little bit of time. So, to really boost domestic supply, it might take a little bit longer than people are anticipating, and that provides some … for the import market. So, India’s really where the focus is.

RIN: Okay. And in Australia, it’s fair to say that take-or-pay contracts have helped perpetuate oversupply. Is there an alternative there?

JS: You mean an alternative to take-or-pay contracts as a structure? Not really. Take-or-pay contracts have been – or rather infrastructure contracts for the rail, for the port – these were signed in 2010 or 2011 for new port development. And they last quite long. The average range is, five to eight years, perhaps.

So, there’s still a little bit of a ways to go and the infrastructure chain hasn’t really shown much of an impetus behind renegotiating those contracts. That’s pretty much an issue for industry over the next three to five years.

RIN: Okay. And what are your thoughts on Glencore’s (LSE:GLEN) recent announcement that they plan to cut 15 million tonnes of exports from Australia this year?

They talked about another 5 million from their South African operations, and 15 million is really the only kind of sizeable piece and that was announced last Friday.

So, I think that will be supportable for price, but we still feel that there’s a lot more to go on curtailing that, that big oversupply in both markets.

RIN: And speaking of price, where do you see prices averaging for thermal and metallurgical coal in 2015?

JS: We see possible floors being reached in 2015. I think metallurgical coal has stayed in and around – on a quarterly contract level – the $116-$117 per tonne range. We see that dropping maybe to $114, and then coming up to maybe $116 by the end of the year.

For thermal coal, prices are actually quite high. There’s a bit of a market dislocation there on the physical side, but the new cost for thermal coal prices we could see averages of maybe between $62 and $64 for the year as for the spot coal of Newcastle.

RIN: Okay. And what does the future hold for thermal coal overall? Can carbon capture programs really work?

JS: Well, that’s going to be a big challenge. Thermal coal demand is, of course, embedded into the power industry and how thermal coal can be moved away from the power sector. That’s where you would lose demand or weaken demand market share.

Carbon capture and sequestration isn’t really commercially available. Of course, you have the Boundary Dam project here in Canada which is the first real commercial/demonstration project that’s viable, but there’s no investment in the Western Hemisphere really in CCS. If it’s going to come anywhere, it’ll have to come from China where there’s a lot of R&D going into other sides of the power sector. CCS would have to come from there. It’s not something that is commercially viable in the Western Hemisphere at this moment in time.

RIN: Okay. And on the met coal side, to what extent could an increase in steel recycling hurt demand for coking coal?

Our view on “peak steel,” if you like, in China is not until the late 20’s. If that comes forward a little bit earlier, and you have the movement towards the electric hot furnace method of producing steel – as against the basic oxygen furnace development – you would then see coking coal demand fall. We see that in the late 2020s, but that horizon might be brought forward.

RIN: And you’ve spoken a bit about how companies are doing. Do you see any junior minors doing well despite the current price environment?

JS: Well, it’s difficult for junior miners. I would say, the trends that we’ve seen are more traders – [juniors] teaming up with traders.

Glencore have been quite involved in the North American coal space over the last maybe 12 to 18 months. And so, what you might see is traders working with junior miners whereby they have access to capital, can take all the risk, have a global footprint, with offtake arrangements in a large portfolio. But they don’t want to get their hands dirty in the mining, whereas the junior minors could do that. And then the traders bring the marketing rights, and are able to access that part of the market.

But a junior miner just working solely on its own, I think, is going to be tough in this environment.

RIN: Okay. Thank you for joining me, Jonny.

RIN: I am Teresa Matich with Resource Investing News.

Coal Outlook 2021: Expected Rebound in Demand to Be Short-lived