Billions of investment dollars are headed for Ontario’s Ring of Fire — and projects held by two small companies. 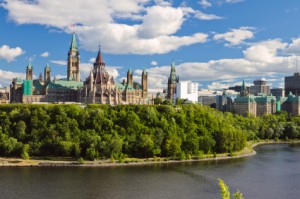 “If you build it, he will come.” That adage could be adapted to the mining business: “if they need to come, they will build it.” When markets need metal, they push ahead the construction of roads, railways and ports to get mined supply to the people who need it.

News from the last few months suggests that Canada may be the next country to see a big infrastructure roll out. That’s good news, as such infrastructure is needed to feed a market under pressure: chromite.

But the slim market caps of two junior companies strategically positioned in the chromite market do not reflect this pressure. Therein may lie opportunity for investors.

Chromite is generally found in special, “ultra-mafic” rocks. The challenge for the market is that such host rocks are rare, and the few places that do have them are facing big mining challenges.

South Africa produced 46 percent of the world’s chromite in 2012, according to estimates from the US Geological Survey. That’s a nation whose mining industry is being eroded by labor unrest and high costs.

The world’s other major chromite producers are India and Kazakhstan. Together with South Africa, this “big three” produces 78 percent of global output.

Chromite buyers are looking for new, more diverse supply sources. That’s especially true of the US, which consumes 6 percent of global chromite output, but lies well outboard of any of the large producer nations.

American chromite demand is on the rise. In 2012, US chromite imports topped pre-financial crisis levels, at 560,000 metric tons. Over the last three years, import demand has been growing at 5 percent annually.

American users have been trying to buy more chromite from Mexico, looking for nearer-to-home options. But output from that nation is limited.

Given this drive to buy local, it makes sense that one of the world’s newest chromite districts is emerging in Canada, just north of US markets.

The Ring of Fire solution

The chromite market’s answer may lie in the Ring of Fire. Located in the remote Ontario wilderness, it has big chromite resources, a major company pushing development and a controversial plan for a massive infrastructure development.

Work in the area — situated some 350 kilometers north of the nearest town of Nakina and Ontario’s Highway 11 — began in 1992, when the area was thought to hold potential for diamonds.

A partnership between juniors Spider Resources and KWG Resources (TSXV:KWG) drilled licenses there in 2006. Rather than gems, they hit chromite.

Excitement over the area ramped up further when Noront Resources (TSXV:NOT) struck nickel, copper and platinum. But as drilling progressed, it turned out that chromite is the Ring’s biggest endowment.

Significant discoveries stacked up across the region: Freewest Resources’ Black Thor and Black Label deposits, Noront’s Blackbird One project and the Big Daddy deposit held by Spider, KWG and Freewest.

The potential was enough to lure in US iron ore producer Cliffs Natural Resources (NYSE:CLF). The firm toed the waters, buying a 19.9-percent stake in KWG Resources through a $3.5-million private placement. Liking what it saw, Cliffs took over Freewest, giving it control over two deposits. The major then bought Spider Resources, giving it a majority 70-percent stake in Big Daddy.

That was a major endorsement, especially given that Cliffs was coaxed into not only a new geography — in Ontario — but also a new commodity. Prior to its Ring of Fire buys, the company had little experience in chromite. It had entered a new frontier for its steel-making operations.

Cliffs thus became the key developer for this new district.

With the prize secured, Cliffs is now in feasibility studies to figure out how to get its chrome to market.

The key challenge is moving ore through hundreds of backwoods kilometers to highway and rail hook ups in the south.

Cliffs thinks the solution is road. The company has said it prefers this lower-capital-cost option, likely to total $1 billion or so, according to recent studies.

But Cliffs’ partner and 30-percent owner of the Big Daddy deposit, KWG Resources, thinks the region can support an even more ambitious development: a railroad.

A study commissioned by KWG states that $1.56 billion is needed (in direct and indirect costs) to build a railway connecting the Ring of Fire with civilization. But that comes with much lower maintenance costs: an estimated $32 million annually, as compared with $183 million for road.

That is mainly because of the need for construction sand and gravel. Both the road and rail options require this material during initial building. But with the Ring of Fire projects lying in swampy lowland, this material would need to be trucked in.

For rail, that would largely be a one-time event, creating the right of way for tracks to be laid. Roads on the other hand, would be constantly damaged by heavy trucks, requiring regular shipments of aggregate for repairs.

Costs for trucking this material are pegged between $22 and $119 million per year, depending on how distant along the road a site is.

Whether rail or road, it’s clear that the Ring of Fire requires a very large infrastructure spend.

All signs indicate that Cliffs — as the major project backer — is prepared to take the price tag on. The company states on its website that the value of the Big Daddy project “becomes evident only once the chromite is mined, and processed into concentrate ferrochrome.” That suggests the company is considering a major and expensive investment in ferrochrome smelting facilities to go along with the mining project — a move the company would only consider if it saw big value in the Ring of Fire ores.

The prospect of such a large-scale investment is especially intriguing in light of the small size of the junior players involved. KWG Resources trades at just a $30-million market capitalization. Noront Resources is somewhat higher at $65 million, but still a fraction of the returns Cliffs must see to justify billions in capital costs.

The Ring of Fire build isn’t a done deal to be sure. In fact, jostling among the partners here may slow things down — as the fight over road or rail goes on, KWG has stealthily acquired much of the land in the transport corridor needed to move ore south by either method.

Cliffs has cried foul over this move to control the development process. The major has asked regulators to grant an easement over the land, potentially alleviating the need for a deal with, or a complete takeover of, KWG.

But the Ring of Fire has lot of push behind it: tight global chromite supply, rich deposits and proximity to hungry US consumers. All of which make the project look like one that needs to be built.

If they do build it, buyers will come to the junior stocks involved. That will bring in a lot of money for those who own them now.