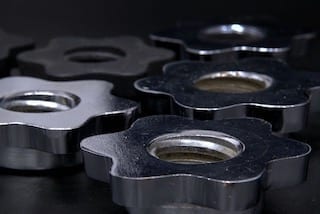 Aluminum has performed well so far in 2017, but will aluminum price gains continue? Many firms, including Goldman Sachs, believe the answer is “yes.”

Aluminum has outperformed all other industrial metals this year, rising 15 percent year-to-date in comparison to steel and 3 percent compared to copper, according to MetalMiner. What’s more, aluminum price gains are expected to continue.
Goldman Sachs (NYSE:GS) said it expects aluminum prices to rise to $2,000 per MT in six months and to $2,100 per MT in 12 months. Prices for the lightweight metal closed May 12 at $1,891 per MT.
“In our view, this strong performance has reflected an increase in the potential for aluminum to be the next target of supply-side reform in China, a tightening ex-China balance, and rising costs of production. Further, global political developments may also be supportive of capacity and production cuts, given the two leaders of the U.S. and China launched a 100-day (trade) plan on April 7,” analysts at the firm recently wrote. 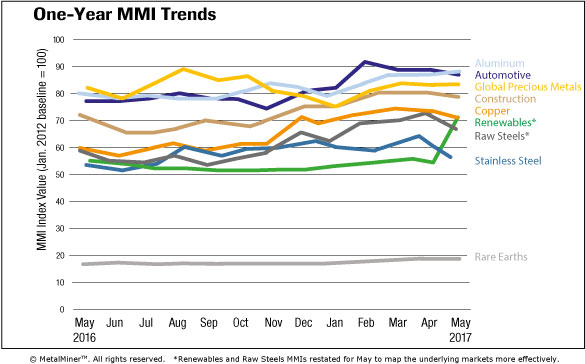 Part of the reason aluminum price gains are occurring is that China is restricting its output of the metal. The move is part of the country’s Winter 2017 Air Quality Pollution Prevention Plan. As part of the plan, producers in 28 cities are reducing their aluminum capacity and production by over 30 percent.
Analysts at Morgan Stanley (NYSE:MS) believe companies outside China will have an opportunity to fill Chinese demand as a result.
China’s aluminum market is also facing external pressure. In April, the US Commerce Department launched a trade probe to investigate whether Chinese aluminum imports pose a threat to the country’s national security. Government officials said only one US firm produces the high-purity aluminum used for American combat aircraft. The probe could lead to the US imposing tariffs on aluminum imports.
A spokesman for China’s Commerce Ministry has said officials are seriously concerned about the probe and hope to resolve the issue through negotiations.
From 2000 to present, China’s share of the global aluminum market has risen from 11 to about 53 percent. During the same period, US aluminum production fell by 77 percent, and America’s global aluminum market share dropped from 16 percent to under 2 percent.

As aluminum supply tightens, demand from many sectors is poised to grow. A Global Market Insights report released this month estimates that the aluminum alloys market will exceed $150 billion by 2024. Global factors projected to drive demand and contribute to aluminum price gains include: increasing air travel and growing construction and infrastructure projects in countries with emerging economies.
What’s more, Research and Markets expects aluminum use in the global automotive industry to reach $42.4 billion by 2022, with the Asia Pacific region as the largest consumer. Growth will be driven by increasing vehicle production, government emissions regulations and rising gas prices.

Recent aluminum price gains have been reflected in the share prices of major aluminum companies. For instance, the share price of American aluminum firm Alcoa (NYSE:AA), which produces one-fifth of the world’s aluminum, has increased 15.38 percent from the start of 2017. Goldman Sachs recently upgraded Alcoa from “neutral” to “buy” based on its “strong free cash flow generation.”
Similarly, major Norwegian aluminum producer Norsk Hydro’s (OTCMKTS:NHYDY) share price has risen 19.7 percent year-to-date, while Aluminum Corp. of China’s (NYSE:ACH) has gained 12.73 percent. The share price of Century Aluminum (NASDAQ:CENX), which US Commerce Secretary Wilbur Ross recently identified as the sole producer of aluminum used for US fighter jets, has gained 62.32 percent since the beginning of 2017.
In contrast, shares in the world’s largest aluminum producer, China Hongqiao Group (HKEX:1378), are up 3.37 from the start of the year, but lost 1.33 from February 23 to March 21 on allegations of fraud. According to The Australian, the company has suspended trading of its shares.
Don’t forget to follow us @INN_Resource for real-time news updates!
Securities Disclosure: I, Melissa Shaw, hold no direct investment interest in any company mentioned in this article.