What’s the aluminum outlook for 2019? Read on to find out experts’ thoughts about the market next year in this overview.

The US-China trade war was without a doubt a key catalyst for the aluminum market in 2018, with US sanctions on major producers fueling supply worries over the last 12 months.

As political tensions escalated during the year, aluminum hit a multi-year high, but was unable to keep the momentum, with demand slowing down in China, the largest producer and consumer of the metal.

Read on for a more detailed overview of the main factors that impacted the market in 2018, plus analysts’ aluminum outlook for 2019.

Prices for aluminum have largely trended downward in 2018, interrupted only by a sharp and short-lived upturn in the second quarter.

As mentioned, aluminum reached a multi-year high in April of this year, when US sanctions on Russian aluminum giant Rusal (HKEX:0486) drove prices up. The company is one of the biggest aluminum producers worldwide and the largest supplier outside of China.

Sanctions against the company came as part of an attempt to punish Russia for various actions, including activities in Crimea, Syria and Ukraine. At the time, 12 Russian companies were targeted, and Rusal’s share price dropped a whopping 50 percent in Hong Kong. 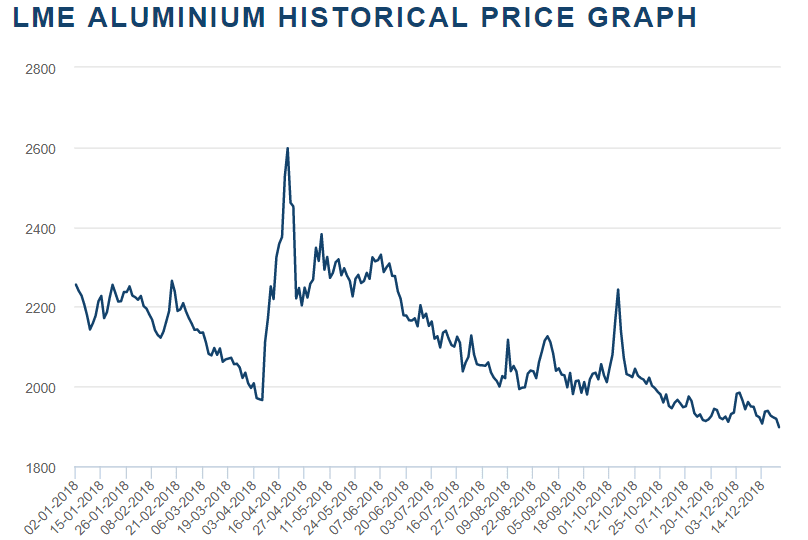 Despite the price uptick, “the delayed imposition of the sanctions and increasing likelihood that Rusal will avoid measures altogether have cut fears of supply shortages and staved off upward price pressures,” said Nihad Ahmed, economist at FocusEconomics.

“Moreover, China’s slowing growth, exacerbated by the tit-for-tat trade war with the US, has seen demand for the metal weaken. The resulting supply/demand dynamics have pushed down prices.”

Similarly, Wood Mackenzie Senior Analyst Ami Shivkar said that in 2018 the aluminum market has been impacted by trade disputes, tariffs, alumina cuts and the Rusal sanctions.

“The sanctions on Rusal are unprecedented in their direct impact on the aluminum market and have the potential to be a permanent game changer,” she said.

Shivkar added that market sentiment was rocked by US treasury department sanctions against Rusal, although initial concerns that these would remove a major slice of the world’s ex-China supply have dissipated to some extent.

Near the end of December, the US treasury announced that US sanctions against aluminum giant Rusal could be lifted in one month, a decision that was welcomed by the company, which said it would continue to do everything necessary to return to regular working conditions.

Looking back at 2018, one of the announcements that caught the space by surprise was the production cut at Norsk Hydro’s (SWX:NHY) Alunorte alumina plant, the largest alumina refinery in the world, which threw the market into a tailspin.

“The Alunorte cut laid the foundation for an extremely tight alumina market, upon which the US sanctions against Rusal sent alumina buyers into panic mode,” Shivkar said.

The company still has no firm timeline for the restart of full output at its Brazilian plant, which has a capacity of about 6.3 million tonnes of alumina per year and has been operating at half capacity since February following a spill of untreated water.

As 2018 comes to a close, investors might be wondering what’s next for the aluminum outlook.

In terms of supply, after years of double-digit output growth, China’s production growth is losing steam, according to Wood Mackenzie.

At the same time, smelter cuts accelerated to 2.2 Mt as prices plunged below RMB 14,000 per tonne.

All in all, Wood Mackenzie’s latest view of market fundamentals points to a deficit of around 1.3 Mt in 2018 followed by a deficit of 1 Mt in 2019.

“While the pace of demand growth has slowed during the second half of 2018, it nonetheless remains at a healthy level,” Shivkar said.

“We see aluminum demand growth being extremely healthy,” he said in an interview. “People believed China was going to be a significant net exporter to the rest of the world in the future, I think people now see China being more balanced.”

For Wood Mackenzie, a factor investors should continue to keep an eye out for is the trade war between the world’s two biggest economies, the US and China. It has weighed heavily on global trade, sparking concerns of an economic slowdown.

“In the short term, these developments and their impact on the economy will continue to dominate aluminum pricing,” she added.

Speaking about prices, aluminum is expected to recover somewhat next year as China’s stimulus plan supports demand for the metal, according to FocusEconomics’ Ahmed.

“Price gains will be likely be limited, however, due to ample supply,” she added.

Panelists polled by the firm estimate the average aluminum price for 2019 will be US$2,138 per tonne. The most bearish forecast for the quarter comes from RBC Capital Markets, which is calling for a price of US$1,874; meanwhile, Deutsche Bank (NYSE:DB) is the most bullish with a forecast of US$2,385.