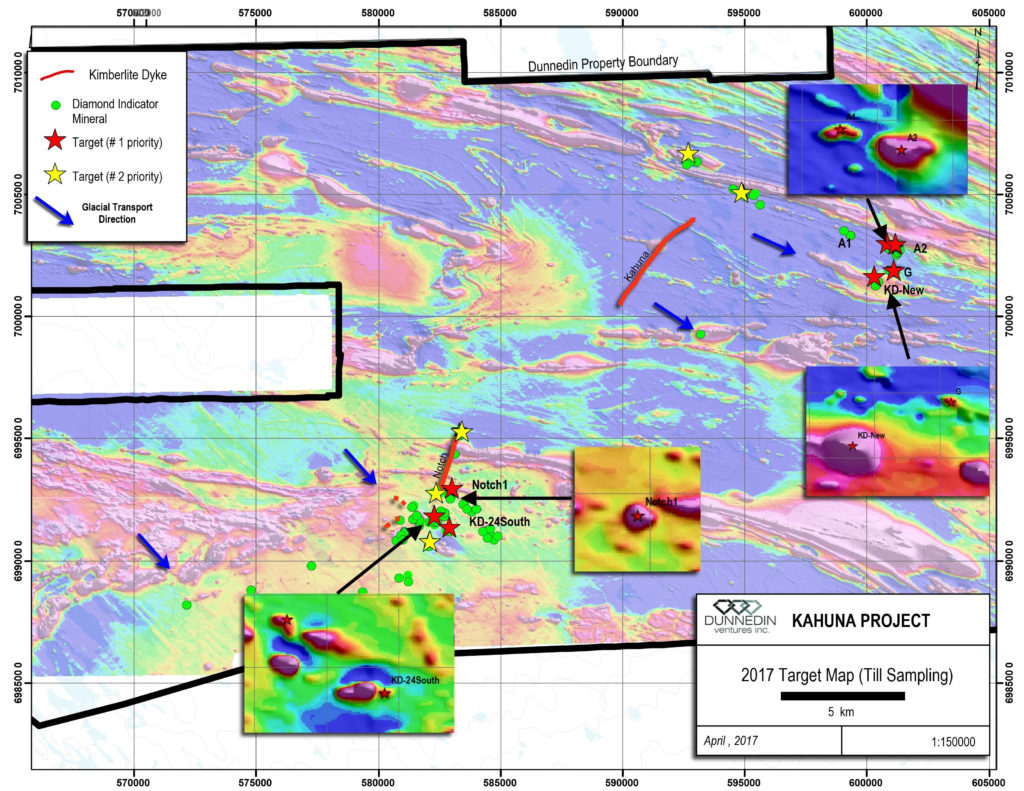 The Company processed kimberlite from the highly diamondiferous Kahuna, PST and Notch kimberlite dikes and also from the KEM dike, a barren body, to compare the indicator mineral signatures of diamondiferous versus barren kimberlites.  All three of the Kahuna, PST and Notch had certain indicator mineral chemistries in common that were absent in the barren body.  These diamond-associated mineral chemistries have now been recovered from till samples down-ice from new kimberlite pipe targets in several areas.
“The Kahuna project covers one of the largest, mostly under tested kimberlite pipe fields in Canada,” said Chris Taylor, CEO of Dunnedin. “While we remain positive on the potential of our diamond-bearing kimberlite dikes such as Kahuna, Notch and PST, the opportunity to additionally benefit our shareholders through a new discovery drives us to also test the pipes.  With these new results in hand, we aim to make 2017 a year of discovery, diamond valuation and resource growth.”
Summary of Results

Mr. R. Bob Singh, P.Geo, Exploration Manager, is the qualified person responsible for the technical content of this news release.
For further information please contact Mr. Knox Henderson, Investor Relations, at 604-551-2360.
On behalf of the Board of Directors
Dunnedin Ventures Inc.
Chris Taylor
Chief Executive Officer
About Till Sampling for Diamond Exploration
Glacial till sampling is used extensively in the Canadian Arctic as a primary exploration tool leading to most major diamond discoveries, the most famous example of which is Ekati, which was discovered by Dunnedin’s advisor Dr. Charles Fipke.
Heavy mineral recovery from tills retrieves kimberlite indicator minerals (‘KIMs’) that were eroded from kimberlites by glaciers and deposited “down-ice”. This creates a train of positive till samples that can be tracked back to their original source.
Some KIMs have chemical signatures that indicate source within the diamond stability field in the lower continental crust.  These are referred to as Diamond Indicator Minerals, or DIMs.  Certain DIM chemistries are known to be characteristic of the occurrence of larger diamonds, based on data sets collected from producing diamond mines.  The Kahuna project’s diamond-bearing kimberlites contain these DIMs, and have also yielded large diamonds.
Dunnedin’s till sampling program utilizes the same sampling and mineral ranking techniques as applied at Ekati, which can predict the potential of kimberlites to host diamonds with a high degree of confidence. The ranking employs proprietary mineral chemistry filters developed at CF Mineral Research Ltd. (“CFM”) of Kelowna, British Columbia, under the direction of Dr. Fipke.
About the Kahuna Project
Kahuna is an advanced stage high grade diamond project located near Rankin Inlet, Nunavut.  Dunnedin is now recovering diamonds and indicator minerals from a series of kimberlite and till samples collected in from two seasons of field work.  An Inferred Resource released by Dunnedin showed over 4 million carats of macrodiamonds (+0.85 mm) at a grade of 1.01 carats per tonne had been defined along the partial strike length of the Kahuna and Notch kimberlite dikes through shallow drilling.  The largest diamond recovered was a 5.43 carat stone from the Kahuna dike which was a piece of a larger diamond that had been broken during the sample preparation process and was reconstructed as having an original size of 13.42 carats.  Recent results include a 0.82 tonne sample of the PST kimberlite dike which returned 96 macrodiamonds totalling 5.34 carats (+0.85 mm) and a 2.36 tonne sample of the Notch kimberlite which returned 89 macrodiamonds totalling 2.38 carats (+0.85 mm).
The Kahuna project is located adjacent to the development-stage Meliadine gold project of Agnico Eagle Mines Ltd. Meliadine has approximately 14.5 million tonnes of Proven and Probable Reserves grading 7.32 g/t gold, containing 3.4 million ounces of gold as of December 31, 2015.   There is an additional Indicated Resource of 20.7 million tonnes grading 4.95 g/t gold containing 3.3 million ounces of gold, and an additional Inferred Resource of 14.7 million tonnes grading 7.51 g/t gold containing 3.5 million ounces of gold (source: www.agnicoeagle.com).
Neither TSX Venture Exchange nor its Regulation Services Provider (as that term is defined in the policies of the TSX Venture Exchange) accepts responsibility for the adequacy or accuracy of this release.
Statements included in this announcement, including statements concerning our plans, intentions and expectations, which are not historical in nature are intended to be, and are hereby identified as, “forward-looking statements”.  Forward-looking statements may be identified by words including “anticipates”, “believes”, “intends”, “estimates”, “expects” and similar expressions. The Company cautions readers that forward-looking statements, including without limitation those relating to the Company’s future operations and business prospects, are subject to certain risks and uncertainties that could cause actual results to differ materially from those indicated in the forward-looking statements.
Click here to connect with Dunnedin Ventures Inc. (TSXV:DVI) to receive an Investor Presentation.