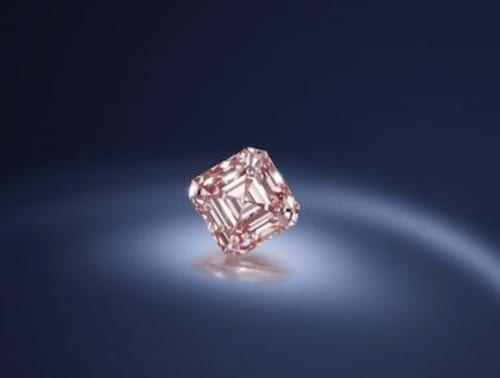 The fancy pink diamond, which beat the record for most money paid per carat for a pink stone, sold for US$2.9 million — roughly US$583,551 per carat.

The fancy pink diamond, which beat the record for most money paid per carat for a pink stone, sold for US$2.9 million — roughly US$583,551 per carat.

Weighing in at 5.03 carats, the rose colored sparkler has a VS1 clarity rating, and features a flattering cut.

“We were honored to be chosen to offer this magnificent pink diamond to our global clients and we were delighted to see how well it performed at the sale,” Emily Barber, director of jewelry at Bonhams, said in the press release.

“This was due to a number of factors: its size – it’s exceptionally rare to see a pink over five carats on the market today; it’s even color saturation and its extraordinarily elegant cut,” she noted.

According to Barber, the pink gem not only offers a great value, but provides a long-lasting heirloom piece to an avid jewel collector, because of its high quality.

Prior to Bonhams auction last week, the record for pink diamonds was set by Sotheby’s Geneva in 2016, when a fancy pink sold for US$528,021 a carat.

The most coveted pink diamonds in the world are mined from Australia’s argyle mine, well-known for its distinctly hued gems.

The mine, which is operated by Rio Tinto (LSE:RIO, ASX:RIO, NYSE:RIO), is slated to close in 2020, a factor that has steadily driven the price of pink diamonds up year-over-year.

While Bonhams is enjoying the notoriety, the major sale is bringing in it may be short lived. Next month, Christie’s Geneva will bring the Pink Legacy to auction.

The 18.96-carat pink diamond is the largest rose colored stone the renowned auctioneer has seen, and is expected to bring in a record setting sum.

“The saturation, the intensity of this stone is as good as it gets in a colored diamond,” Rahul Kadakia, International head of jewelry for Christie’s Geneva, said in the announcement.

The rare 19+ carat gem has been brought to auction by the Oppenheimer family from their family jewel collection. The Pink Legacy will be included as part of Christie’s Magnificent Jewels auction, which will be held on November 13, in Geneva.

It is believed the almost 20 carat salmon colored stone could fetch anywhere between US$30 million to US$50 million.