The prices for rough diamonds has recently fallen. Is this a sign that diamonds are losing their shine? 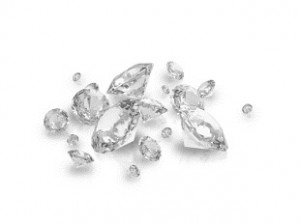 Perhaps due to the lack of press and fanfare, it may have slipped by unnoticed that diamonds have been doing extremely well since 2009. The stones are considered one of the best performing commodities of this year. But, a recent cooling of rough diamond prices has raised questions as to how long the stones will continue to shine. Frenzied investors should remain calm. There are no indications that you bought into a bubble and diamond investments are still believed to be smart ones.

In July, Diamond Trading Company Botswana (DTCB) celebrated its largest diamond sale ever, but the company also forewarned that it was time for prices to cool off. Then, August rolled around and the prophecy was fulfilled. Prices in India saw double digit declines and BHP Billiton (NYSE:BHP) made similar reports. However, the prices for polished stones remain high and there is little indication at this point of any notable fall.

With regard to this recent pullback in the pricing of rough diamonds, first, it is important to realize that even with the declines, prices are still up because of the impressive gains diamonds have made over the past year. Second, volatility is simply a reality in the investment community right now. There are a lot of people who were burned by sharp losses during the financial crisis and the effects influence their current decisions.

However, historical data shows that demand for diamond jewelry and thereby polished diamonds can be closely linked to changes in disposable income at a household level, says a report by Edward Sterck, research analyst for BMO Capital Markets.

This statement is largely supported by the increasing diamond activity seen in emerging nations. China, for example, has a growing middle class with a growing penchant for luxury. Coincidentally, the nation’s demand for polished diamonds grew by 25 percent last year. Likewise, there is significant financial advancement in India, a nation with a reputation for being jewelry investors. Polished diamond demand there grew by an estimated 31 percent. These two countries are expected to have GDP growth that exceeds that of many developed nations and it is expected that their demand for diamonds will provide strong support for prices.

Furthermore, in 2010, Dubai’s diamond trade doubled and it engaged in growing trade with new emerging markets such as Angola and the Democratic Republic of Congo. As a growing number of people seek alternative investments, retailers are reporting strong sales in the United Arab Emirates (UAE) despite steep price increases. These are indications of the growth that has been reported from the Gulf region.

Even with the growing demand from emerging nations, demand from the US is not yet negligible. The US is still the nation with the largest diamond appetite, which is estimated to have accounted for 38 percent of sales last year. Despite the bleak employment situation and the looming economic uncertainty, polished prices in the US have held their ground, the market has not shown significant signs of a slowdown, and the International Diamond Exchange says that American traders are expressing  the most interest in higher value rough diamonds. 2010 was not a year in which the US economy was particularly robust, but demand grew by 7 percent and growth is also expected this year.

Though prices may slide a bit further, there appears to be little concern in the industry that diamond prices have or will take a serious dive. In the short term, prices are expected to remain fairly stable. During this period, investors may be able to find attractive bargains in both mining company stocks and in stones. In the long term, it is expected that diamond prices will continually rise, but perhaps not as drastically as they did coming out of the previous financial crisis.

Securities Disclosure: I, Michelle Smith, have no interest in any of the companies mentioned in this article.