Arctic Star Exploration Corp (TSXV:ADD / FSE: 82A1 / OTCQB:ASDZF) (“Arctic Star” or the “Company”) is pleased to announce it has received the final caustic fusion diamond results from drill testing the Black and Grey Wolf kimberlites, obtained from the 2018 Spring diamond drilling program.

Arctic Star Exploration Corp (TSXV:ADD / FSE: 82A1 / OTCQB:ASDZF) (“Arctic Star” or the “Company”) is pleased to announce it has received the final caustic fusion diamond results from drill testing the Black and Grey Wolf kimberlites, obtained from the 2018 Spring diamond drilling program. The results for the Black Wolf kimberlite from 349.75 kg of split HQ size drill core are shown in Table 1, the results from Grey Wolf are shown in Table 2. 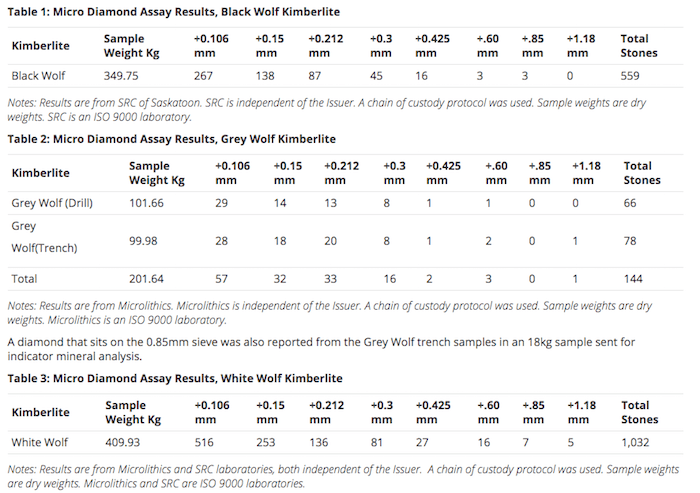 Arctic Star completed first pass exploration and delineation drilling on the Timanitti Diamond Project in March this year and located four separate kimberlites. This release completes results expected from this drill program. Table 3 showing the results from the White Wolf kimberlite are also given here for completeness and easy comparison.

Arctic Star’s management and exploration team are pleased to see that each of the kimberlites discovered to date contain diamonds and are significantly mineralised when compared to other exploration projects worldwide at this stage of exploration. Based on laboratory descriptions of the diamonds the majority are white in colour and octahedral in shape. Colours are described as white, brown and grey.

The positive results from the Wolf kimberlites are such that further evaluation work is warranted. These kimberlites where drilled from the perceived centre of the kimberlite to obtain the maximum amount of kimberlite for diamond analysis. This drilling has shown that the “Wolves” are not vertical pipes but bodies dipping to the North – North East at approximately 35 degrees. The Wolves occur in a linear East West trend 300m long with Grey Wolf in the West and White Wolf in the East. The best interpretations to date are that these kimberlites are, “Blows” along a feeder dyke or a fault displaced semi-continuous sill. The next step is to further delineate the Wolves with angled drill holes from the north to intercept the dipping kimberlite. This work would outline the tonnage and allow planning for bulk sampling.

Ground and UAV airborne geophysics have revealed numerous magnetic targets similar to the anomalies over the Wolves. Management is confident that more kimberlites will be found.  One of the prime targets will be drilling existing magnetic anomaly along the East-West extension of the Wolves.

The company plans to mobilize the excavator and ground geophysical crews in November, with drill testing in early 2019.

The Qualified Person for this news release is Buddy Doyle, AUSIMM, a Geologist of over 30 years’ experience in diamond exploration, discovery and evaluation.

The Company owns 100% of the recently acquired Timantti Diamond Project including a 243 Ha Exploration Permit and a 193,700 Ha Exploration Reservation near the town of Kuusamo in Finland. The project is located approximately 550km SW of the operating Grib Diamond Mine in Russia. Arctic has commenced its exploration in Finland on the Timantti Project, where four diamondiferous kimberlite bodies may represent the first finds in a large kimberlite field. The Company also controls diamond exploration properties in Nunavut (Stein), the NWT (Diagras and Redemption) and a rare metals project in BC (Cap).

ON BEHALF OF THE BOARD OF DIRECTORS OF ARCTIC STAR EXPLORATION CORP.

Forward-Looking Statements: Certain statements in this press release are forward-looking statements within the meaning of applicable securities laws. Forward-looking statements in this press release include that the Timantti Project offers high potential for numerous further diamond-bearing kimberlite discoveries; Arctic’s drilling and surveying plans and the expected outcome of those plans; that Arctic can swiftly discover more kimberlite on the property; that the Wolf kimberlites themselves may have the potential to be economic.

The Wolf kimberlite assets have not been the subject of any recent resource work, much less a feasibility study and as such there is no certainty that any future resource will be defined or that the assets will be able to produce a commercially marketable product. There is a significant risk that any future efforts at the project will not demonstrate any merit for evaluation work to progress to a defined NI 43-101 compliant resource and economic study. General risks inherent in the Project include the reliance on available data and assumptions and judgments used in the interpretation of such data, the speculative and uncertain nature of exploration and development, exploration and development costs, capital requirements and the ability to obtain financing, volatility of global and local economic climates, possible political instability, share price volatility, estimate price volatility, changes in equity markets, increases in costs, exchange rate fluctuations and other risks involved in the mineral exploration and development industry. There can be no assurance that the forward-looking statements or information referenced herein will prove to be accurate, as actual results and future events could differ materially from those anticipated in such statements or information. Also, many of the factors described are beyond our control. Accordingly, readers should not place undue reliance on forward-looking statements or information. We undertake no obligation to reissue or update any forward-looking statements or information except as required by law.