Companies who rely on gold, tin, tungsten and tantalum to manufacture their products are coming under increasing public pressure to ensure the minerals they use are conflict free. 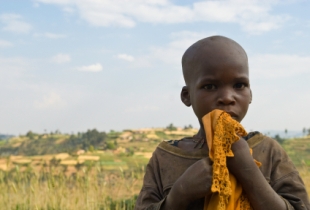 With respect to companies that are responsible for what are now being called conflict minerals, I think the international community must start looking at steps we can take to try to prevent the mineral wealth from the DRC ending up in the hands of those who fund the violence here. —U.S. Secretary of State Hillary Clinton

The phrase “conflict minerals” is quickly becoming a much more familiar term as concerned consumers, organizations and politicians begin to raise public awareness of the role the mineral trade plays in fuelling the violence raging in the eastern provinces of the DR Congo.

While the “conflict” in the Congo has been labeled a war, Enough Project Co-Founder John Prendergast recently said it’s actually more “a business based on violent extortion.” Prendergast appropriately dubs it a “mafia-style economy.”

Unfortunately, it is not just the FDLR militia or the Congolese army who profit from this violent business of forced labor and institutionalized rape. Also profiting are the governments of the Congo, Rwanda, and Uganda as well as the companies that purchase and refine the metals, those that fabricate electronic components such as tantalum capacitors, and those that produce electronic devices like cell phones and laptops.

Companies who rely on gold, tin, tungsten and tantalum to manufacture their products are coming under increasing public pressure to ensure the minerals they use are conflict free.

Those pushing for change and more accountability include consumers, Hollywood actors, college campus activists, US politicians, faith-based groups and NGO’s such as Global Witness and the Enough Project.

Pressure from these sources in the United States has resulted in draft legislation in both the House of Representatives and the Senate. The Congo Conflict Minerals Act of 2009 was introduced in the Senate last May by Senators Sam Brownback (R-KS), Dick Durbin (D-IL) and Russ Feingold (D-WI). The Conflict Minerals Trade Act 2009 was introduced last November in the House by Congressman Jim McDermott (D-WA).

The House and Senate bills call for further investigation by the UN Group of Experts on Congo, mapping control of mines in eastern Congo, and development of strategies to address conflict minerals. There are also provisions for guiding companies in exercising due diligence when it comes to transparency and accountability in their supply lines.

The Senate bill demands all US stock exchange listed companies, including major electronics companies, disclose the exact mine of origin for minerals coming from conflict zones. The House bill also seeks to stop the influx of conflict minerals into the US by way of electronics products through a stringent audit system of global processing facilities.

The United Nations is  on board to stop the Congo conflict mineral trade, as well. The UN Security Council has passed a resolution that would allow for asset freezes and travel bans on companies who profit from conflict minerals.

Groups like Global Witness are not calling for a complete halt to minerals purchases from the DR Congo, but rather the establishment of a conflict-free mineral supply chain and more ethical mining practices in the region.

Prendergast says he sees an “opportunity for real progress” in the Congo. But first, the world’s leading electronic companies need to not only acknowledge the problem, but start aggressively pursuing solutions rather than simply drafting toothless policies.

Some advocates for change are looking to President Barack Obama to further the cause. Prendergast says the Obama Administration could improve “on the Kimberley Process . . . by kick-starting negotiations for a global arrangement to certify conflict-free minerals.”

What can consumers and investors do to help stop the flow of conflict minerals into the global market? They can pressure electronics companies by demanding conflict-free products and investing only in companies who take the necessary steps to ensure their supply lines aren’t tainted by conflict minerals. “Electronics brands and other companies that use conflict minerals now have a clear choice between showing leadership, or facing a public backlash,” says Global Witness Campaigner Daniel Balint-Kurti.

The hope is that once the conflict mineral trade is no longer profitable for the armed groups involved, the violence propagated because of the trade will cease.

2 responses to “Working Toward a Conflict-Free Mineral Trade”