Natural resources like tin, tungsten and tantalum have been branded with the moniker “conflict minerals” because the militias enslave locals to mine the metals and then use the funds garnered from their sale to help finance their bloody operations. 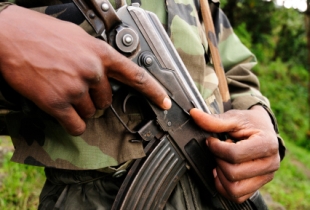 Most people today are familiar with the term “blood diamond” and the gruesome reality the name invokes. Global pushback against the trade in conflict diamonds from regions steeped in brutal slavery and guerrilla warfare led to the adoption of the Kimberley Process by those in the industry and in the global community actively trying to block sales of diamonds used to finance war.

Blood diamonds are just one story in a long history of violence linked with the exploitation of people and resources that has plagued humankind for millenniums.

Another example of this shameful side of human nature is taking place today in the Democratic Republic of the Congo (DR Congo). The minerals involved include gold, tin, tungsten and tantalum, which are used to fund murderous militias caught up in a war between two peoples that has spilled over the borders from Congo’s neighbours.

The 1994 Rwandan genocide was the catalyst that pushed Zaire, later to be renamed DR Congo, into the deadliest conflict since WWII. After the overthrow of the Hutu regime in neigbouring Rwanda, over two million Hutus, including many of the militiamen who committed numerous atrocities, flooded over the borders of eastern Zaire to escape possible retribution from the Tutsi.

The fleeing Hutu militia members found allies with Mobutu’s government and soon began violently persecuting the Zaire’s Tutsi population. Of course, Rwanda’s new Tutsi government provided support for Tutsi militias in Zaire fighting the Hutu and Mobutu’s troops. The Tutsi also formed alliance with other Ugandan-backed groups and managed to overthrow Mobutu. It was then that Zaire became DR Congo.

However, the newly installed president Laurent Kabila was soon ousted by Rwanda after he failed to throw out the Hutu militia. Kabila sought the aid of Angola, Namibia and Zimbabwe and the region fell into a bloody five-year war known as the Second Congo War in which over five million Africans perished.

The war supposedly ended in 2003, however the region of eastern DR Congo is still under its shadow. General Laurent Nkunda, a Tutsi warlord believed to have the backing of Rwanda had been set on eradicating the area of any Hutu members of the Democratic Forces for the Liberation of Rwanda (FDLR), who he claimed the DR Congo government was supporting.

In late 2008, Rwanda and DR Congo forces came together to fight the FDLR in North and South Kivu provinces and General Nkunda was exiled to Rwanda where he lives under house arrest. Unfortunately, the move did not pay off and gruesome large-scale murders and rapes are still occurring at the hands of both rebels and government troops even with the area supposedly under UN peacekeeping operations.

Conflict Minerals in the Global Marketplace

Natural resources like tin, tungsten and tantalum have been branded with the moniker “conflict minerals” because the militias enslave locals to mine the metals and then use the funds garnered from their sale to help finance their bloody operations.

Sadly, it’s become apparent that even the Congolese army is taking part in the exploitation. Several thousand of the army soldiers are actually former rebels once under the command of General Nkunda and are seeking to establish their control over the region’s mineral resources.

“They didn’t integrate into the army, they took it over and now control huge parts of [the region],” says an anonymous former diplomat.

Once extracted, the conflict minerals are then taken to trading houses where they are prepared for sale in the global market and purchased by companies willing to ignore the illegal and inhumane way the ore was procured. Eventually, the processed ore makes its way into everyday items we Westerners often take for granted like cell phones, handheld gaming devices, and laptop computers.

According to Global Witness, “the illicit exploitation of natural resources in [Congo], and the accompanying serious human rights abuses, would not have taken place on such a large scale if there had not been customers willing to trade in these resources.”

Concerned organizations like the Enough Project, created by the Center for American Progress, and Global Witness, who helped bring the blood diamond controversy to global attention, along with the United Nations and other governmental agencies are bringing increasing pressure on those in the tantalum industry to ensure consumer products become conflict mineral free.

In later commentaries we’ll discuss the specific efforts these organizations are making towards creating a global marketplace free of conflict minerals, what these efforts mean for the future of the tantalum industry and what ethical investing opportunities exist in this sector of the mineral resource market.