A recent expose by National Geographic explores the conflict regions of the Democratic Republic of the Congo and shows how conflict minerals have made their way into our everyday electronics. 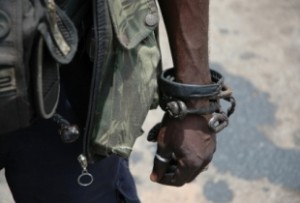 The Democratic Republic of the Congo (DRC) is one of the richest countries in the world when it comes to mineral wealth. Unfortunately, it is also the poorest. The eastern part of the DRC is plagued by a corrupt and unstable government as well as militia groups that continue to threaten and wreak havoc on the region. With a long history of violence and conflict, what goes on in the DRC tends to remain hidden from public eye. But not anymore.

In this month’s issue of National Geographic, a 125th Anniversary Collector’s Edition that celebrates the publication’s photographic prowess, you will not only find pages filled with breathtaking landscapes and beautiful faces, but also a modern-day horror story. The October issue of the magazine features an article written by Jeffrey Gettleman, with photography by Marcus Bleasdale, that gives voice to and visually captures the unspeakable violence of mineral extraction in the DRC.

Look back a decade and the term “conflict mineral” would bring to mind diamonds — specifically, blood diamonds. But flash forward to today, and even more minerals and metals have been added to the list. Used to fund criminal activities, minerals such as tungsten, tin, gold, cobalt and tantalum are illegally mined, smuggled and sold to manufacturers worldwide. With a significant portion of these specialty metals stemming from the conflict-ridden, war-torn province in the Congo, it is very likely that somewhere down the pipeline, some of these conflict materials have found their way into one of the many electronic devices you use on a daily basis.

How can we stop conflict minerals?

For years now, global supply chains have been contributing to funding the armed conflict and human rights violations running rampant in the Eastern Congo. With tantalum — a corrosion-resistant mineral used to make small capacitors often found in electronic devices — 20 to 50 percent of its global supply comes from the Eastern Congo. What is to say that somewhere down the supply pipeline, conflict tantalum hasn’t made its way into one of your electronics?

The Enough Project, a humanitarian group, says that Gettleman and Bleasdale do a good job of portraying both the problems and solutions to the conflict minerals problem. In an interview with PBS, Bleasdale points to who he believes is the solution: the consumer.

Getting conflict minerals out of the supply chain all comes down to the decision a consumer makes to effectively boycott companies that sell products whose mineral origins cannot be proven conflict free.

Making things easier for the consumer is the Dodd Frank Act, which was passed in 2010 by the Obama Administration. While not yet perfected, Dodd Frank is aimed at forcing publicly listed companies to disclose their use of conflict minerals.

Understandably, full transparency is a difficult feat to accomplish. January 2013 marked the first calendar year in which new regulations stating that manufacturers must disclose their use of conflict minerals took effect. The calendar year extends  to May 31, 2014; however, an early look at US firms shows that more than one -third of companies are unprepared to adopt the new regulations, Mining.com wrote in September. According to the publication, a verdict on whether or not the new regulations will be upheld, is expected.

Some manufacturers are doing it right

Though there are still many companies that are struggling to step into the conflict-free minerals space, there are also a handful that are making strides in sourcing materials from conflict free regions across the globe.

These companies include Kemet (NYSE:KEM) a manufacturer of electronics components who relies heavily on tantalum for its day to day operations.

Computer-chip manufacturer Intel, is also making strides in the way of conflict-free materials sourcing with policies in place, and due diligence measures required by its suppliers to ensure that all their components remain DRC-conflict-free.

HP and Motorola are also tracking the minerals used in their products.

2 responses to “How to Stop Conflict Minerals”