LiCo Energy Metals Inc. (TSXV:LIC) announces that has entered into an option agreement with Surge Exploration Inc. (“Surge”) dated May 7, 2018 (the Agreement”), whereby Surge may earn an undivided 60% interest in the Glencore Buck Property and the Teledyne Cobalt Property, located in Cobalt, Ontario. The transaction is subject to TSX Venture Exchange (“Exchange”) approval.

LiCo Energy Metals Inc. (TSXV:LIC) announces that has entered into an option agreement with Surge Exploration Inc. (“Surge”) dated May 7, 2018 (the Agreement”), whereby Surge may earn an undivided 60% interest in the Glencore Buck Property and the Teledyne Cobalt Property, located in Cobalt, Ontario. The transaction is subject to TSX Venture Exchange (“Exchange”) approval.

Purchase Price -Surge shall pay the Company the sum of $240,000 and issue 1,000,000 fully paid and non-assessable common shares in the capital of Surge upon Exchange Approval. In addition, Surge shall incur an aggregate of $1,536,000 in Exploration Expenditures on the Property on or before two years from the date of the Agreement.

Joint Venture – Upon Surge having exercised the Option, Surge will have earned an undivided 60% interest in the Property, and the parties will enter into a Commercially Reasonable and Definitive Joint Venture Agreement.

Finder’s fees will be paid on behalf of the transaction in accordance with Exchange policies.

Pursuant to TSXV Policy 5.9 and Multilateral Instrument 61-101 — Protection of Minority Security Holders in Special Transactions (“MI 61-101”), the Option Agreement constitutes a “related party transaction” due to the fact that the President and CEO of LiCo is also a director of Surge. The Company relied on Section 5.5(a) of MI 61-101 for an exemption from the formal valuation requirement and Section 5.7(1)(a) of MI 61-101 for an exemption from the minority shareholder approval requirement of MI 61-101 as the fair market value of the transaction did not exceed 25% of the Company’s market capitalization. The disinterested members of the board of directors have unanimously approved the transaction and have determined that the purchase price of the transaction is fair to the Company and its shareholders based on the Company’s previous positive drilling programs on the properties, two unsolicited expressions of interest from arm’s length parties, combined with the purchase price that the Company previously paid to acquire the properties.

LiCo Energy Metals Inc. is a Canadian based exploration company whose primary listing is on the TSX Venture Exchange. The Company’s focus is directed towards exploration for high value metals integral to the manufacture of lithium ion batteries. 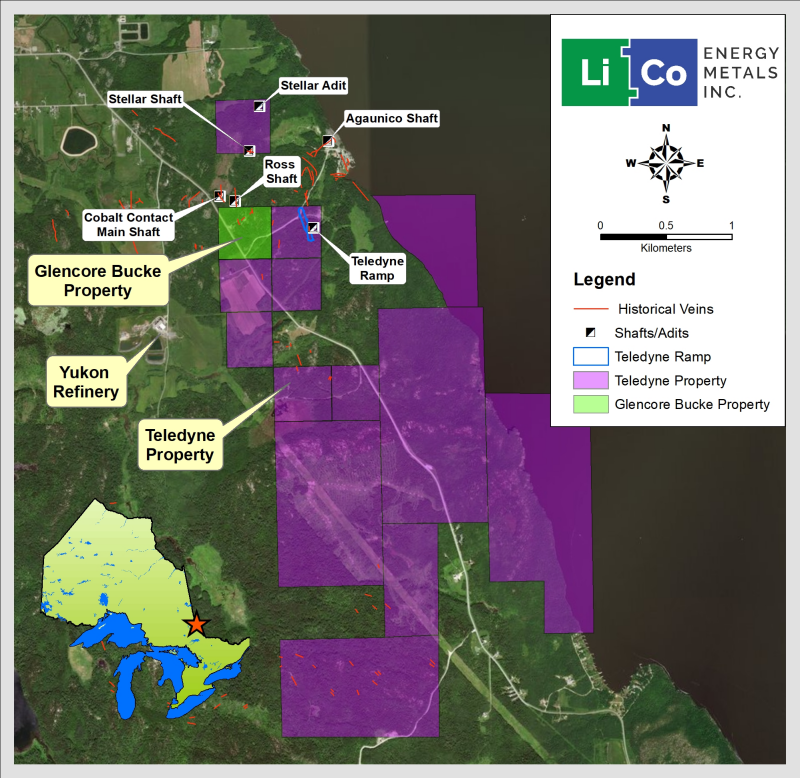 The Company has recently exercised its option to earn 100% ownership, subject to a royalty, in the Teledyne Project located near Cobalt. Ontario. The Property adjoins the south and west boundaries of claims that hosted the Agaunico Mine. From 1905 through to 1961, the Agaunico Mine produced a total of 4,350,000 lbs. of cobalt and 980,000 oz. of silver. A significant portion of the cobalt that was produced at the Agaunico Mine located along structures that extended southward onto the Teledyne property. The Company completed a total of 11 diamond drill holes totaling 2,200 m in the fall of 2017. The drilling has confirmed cobalt mineralization present on the Property which is consistent with historical grades as reported historically by Cunningham-Dunlop (1979) and Bressee (1981), disclosed in earlier news releases. These reports are available in the public domain through MNDM’s AFRI database.

The Purickuta Project is located within Salar de Atacama, a salt flat encompassing 3,000 km2, being about 100 km long, 80 km wide and home to approximately 37% of the worlds Lithium production and Chile itself holds 53% of the world’s known lithium reserves (Source: Bloomberg Markets – June 23, 2017, “Lithium Squeeze Looms as Top Miner Front-Loads, Chile Says”). The property is 160 hectares large and is enveloped by a concession owned by Sociedad Quimica y Minera (“SQM”) and lies within a few kilometers of a property owned by CORFO (the Chilean Economic Development Agency) where its leases land to both SQM and Albermarle’s Rockwood Lithium Corp. (“Albermarle”) for lithium extraction. Together these two companies, SQM and Albermarle, have a combined annual production of over 62,000 tonnes of LCE (Lithium Carbonate Equivalent) making up 100% of Chile’s current lithium output. As reported in The Economist (June 15, 2017 – A battle for supremacy in the lithium triangle), the Salar de Atacama has the largest and highest quality proven reserves of lithium. The combination of the desert’s hot sun, scarce rainfall, and the mineral-rich brines make Chile’s production costs the world’s lowest. This together with a favourable investment climate, low levels of corruption, and the quality of its bureaucracy and courts makes Chile a favourable place to conduct business.

The Company has an option to acquire a 100% interest, subject to a 3% NSR, on a large lithium exploration project at the Humboldt Salt Marsh in Dixie Valley, Nevada. Some important geological similarities exist between various lithium brines, notably geothermal activity, a dry climate, a closed basin, an aquifer, and tectonically driven subsistence exist at Dixie Valley along with Clayton Valley and various lithium bearing salars in Chile, Argentina and Bolivia.

The technical content of this news release has been reviewed and approved Joerg Kleinboeck, P.Geo., an independent consulting geologist and a qualified person as defined in NI 43-101.