Surge Exploration Inc. is pleased to report it has added additional mineral claims in the area of its Caledonia Project in Northern Vancouver Island.

Surge Exploration Inc. (the “Company” or “Surge”) (TSXV:SUR, OTC:SURJF, FRA:DJ5C) is pleased to report it has added additional mineral claims in the area of its Caledonia Project in Northern Vancouver Island British Columbia under the previously announced Purchase and Sale Agreement dated November 1, 2019 and announced on November 5, 2019 . These new mineral claims include the Silver Skarn Project and additional land nearby the former Island Copper Mine. This acquisition of a 100% interest in these additional mineral claims adjoins the recently acquired Caledonia, Cascade and Bluebell claims (together referred to as the “Caledonia Project” by Surge) (see the original News Release dated October 17, 2019 and the subsequent news release dated November 5, 2019). This acquisition will allow for the exploration of possible strike extensions of high-grade mineralization to the east and the west from the Caledonia Project underground workings, along with the further exploration of the Silver Skarn mineral claim to the north and west of the Caledonia Project.

The Caledonia Project, together with the recently staked Silver Skarn mineral claim, is in the Nanaimo Mining District of northern Vancouver Island, adjacent to the joint venture between Freeport-McMoRan and Northisle Copper and Gold Inc. Under terms of that joint venture agreement, Freeport-McMoRan can earn up to a 65% with C$24 million in exploration expenditures over seven years. Freeport-McMoRan is currently one of the world’s largest copper producers. Additionally, the Caledonia Project lies within a 50-kilometer-long copper belt and only 4 km northwest of BHP’s previously producing Island Copper Mine (Canada’s third-largest copper producing mine responsible for extracting 345 million metric tonnes @ 0.41% Cu, 0.017% Mo, 0.19 g/t Au, and 1.4 g/t Ag).

Relevant Historical Information: The Caledonia Project (taken from The B.C. Ministry of Energy and Mines, Minefile No 092L 209): 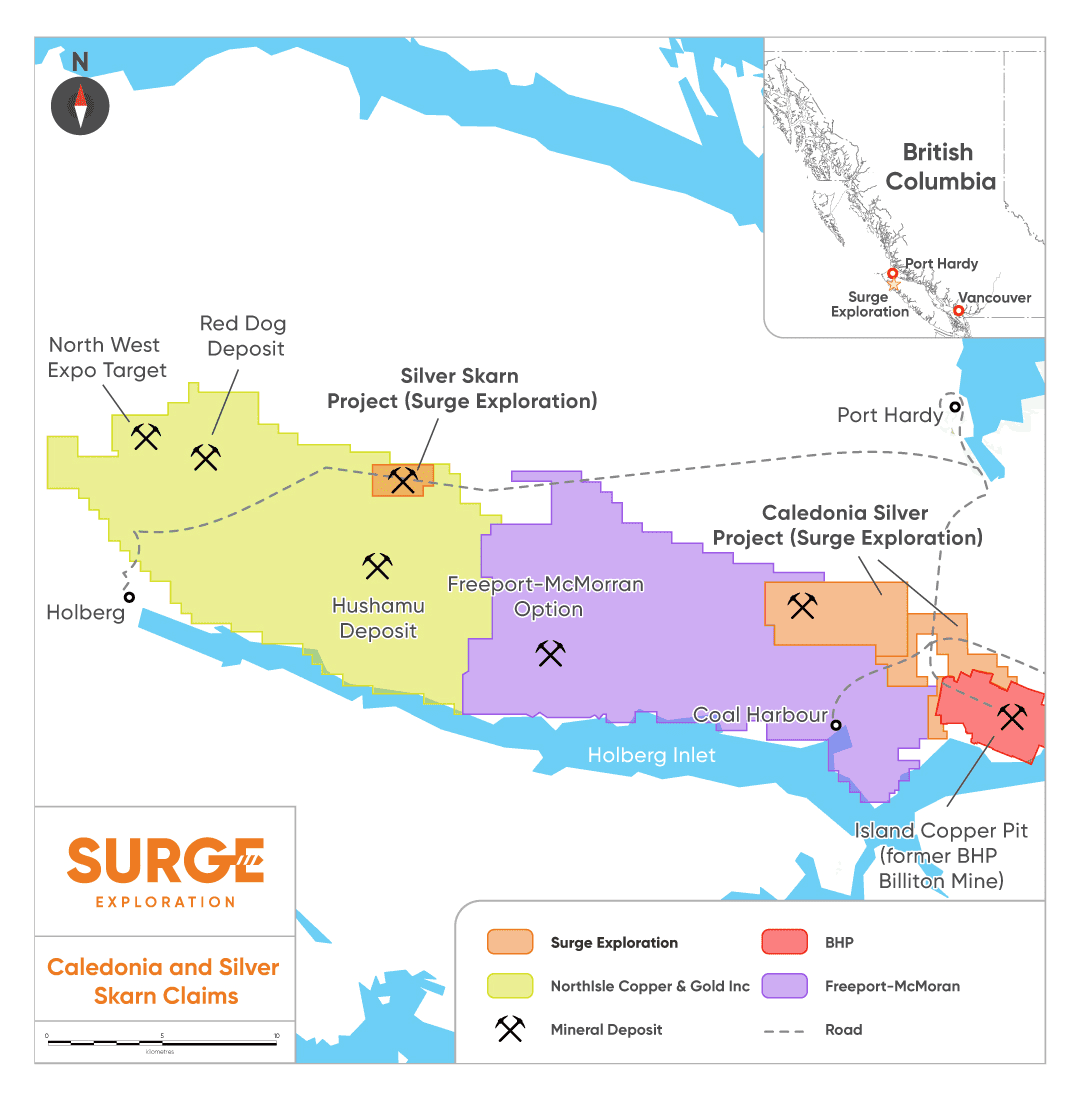 Mr. Tim Fernback, Surge President & CEO states: “The area of our Caledonia Project and Silver Skarn mineral claims remains relatively underexplored and has a strong history of past mineral exploration. This results in plenty of blue-sky potential for Surge. I believe we can greatly expand on the known mineral discoveries within our project area and this exploration potential should excite our investors over the course of 2020.”

J.W. (Bill) Morton, professional geoscientist, a qualified person within the context of National Instrument 43-101, has reviewed this news release and concludes it correctly reflects information as reported in the various news releases and assessment reports from which it was derived and approves the scientific and technical disclosure cited in the news release.

In additional news, the Company announces that it has formally dropped the option for 60% interest in the Hedge Hog Property mineral claims with Eastfield Resources, and furthermore plans to not renew its mineral claims for its Mineral Mountain Properties in British Columbia as they come up for annual renewal. Management plans to concentrate its resources on its Trapper Lake Property, the Ontario cobalt properties and Caledonia Project in 2020.

The Company owns 100% interest in the Golden Triangle – Trapper Lake Group of 23 mineral claims which are located in the prolific Golden Triangle Region of northwestern British Columbia approximately 90 km ENE from Juneau, Alaska. Surges’ staking program totals an area of approximately 325 sq. km within the regionally important geological and structural trend. A large portion of the new property is adjacent to the Thorn Project owned by Brixton Metal’s Corp. (“Brixton”, TSXV:BBB) with the balance covering prospective open ground containing numerous B.C. Minfile showings with Cu, Ag, Au values adjoining the boundaries of the Golden Bear Mine, a 480,000 oz Au past producer.