First Cobalt Corp. (TSXV:FCC, OTCQX:FTSSF, ASX:FCC)(the “Company”) is pleased to report drill results from its Iron Creek Cobalt Project in Idaho, USA, that extend mineralization at depth and continue to demonstrate thick mineralized areas between the two known zones as well as in the footwall and hanging wall of the current resource area.

First Cobalt Corp. (TSXV:FCC, OTCQX:FTSSF, ASX:FCC)(the “Company”) is pleased to report drill results from its Iron Creek Cobalt Project in Idaho, USA, that extend mineralization at depth and continue to demonstrate thick mineralized areas between the two known zones as well as in the footwall and hanging wall of the current resource area.

“Results from the drill campaign completed in December are showing very good continuity and consistency of mineralization. As expected, we have encountered mineralization at depth and in the footwall and hangingwall of the No Name and Waite Zones. In addition, mineralized intercepts between the two historic zones are occurring over appreciable widths, indicating the possibility that the two zones could in fact be a single, larger zone. A total of 13,000 metres were completed in phase two drilling and assays received to date provide a strong indication that the Company can show a significant enhancement over the maiden resource estimate.

First Cobalt is well positioned for a rebound in the commodities sector. Important near term catalysts for shareholders include an update on the First Cobalt Refinery expected shortly and the Iron Creek resource estimate anticipated by March 31.”

Results reported today are encouraging for three reasons (Figure 1). First, they have extended the cobalt-copper mineralization by approximately 100m downdip in the central area of the Iron Creek Cobalt Project inferred resource. A historic resource estimate by Noranda and others interpreted this area as barren but First Cobalt drilling suggests otherwise. A second outcome from these results is that infill drilling has confirmed good continuity of mineralization in the central portion of the resource, both at depth and between the No Name and Waite Zones. Lastly, new intersections of mineralized horizons outside of the two zones suggest further tonnage potential beyond the boundaries of the maiden resource estimate.

The phase two drill campaign consisted of 43 holes and over 13,000 metres and ended in December 2018. With the seven holes released today, a total of 21 holes have been reported with an additional 22 pending. Phase two drilling follows the publication of the maiden resource estimate in 2018 that was based on 62 holes and over 15,000 metres of drilling. The second phase of drilling was intended to extend the strike length of the mineralized zone from over 500 metres to over 1,000 metres and test downdip extensions of known cobalt-copper zones from 150 metres to over 300 metres below surface. An updated resource estimated is expected by the end of the first quarter of 2019.

Three of the seven surface drill holes tested mineralization below Adit #2 (Figure 2). Results continue to show both the No Name and Waite Zones extend downdip at grades comparable to the 2018 resource estimate. In addition, mineralization between the two known zones of 15.9m grading 0.18% Co including 5.8m of 0.30% Co represent an additional continuous horizon. In this area, the Waite Zone is locally thickened with higher grade intercepts including 12.1m of 0.31% Co. In hole ICS18-14, a deep intersection of the Waite Zone extends mineralization 100mdowndip in the central area of the resource. Mineralization in the footwall also continues to be intersected that can be correlated to other drill holes along strike. In the hangingwall, hole ICS18-11 intersected 2.9m of 2.44% Cu that may be associated with similar grade copper mineralization west of Adit #2.

The other four holes were also drilled from surface and targeted a gap along the strike extent of the No Name Zone previously interpreted from the historic exploration programs. Today’s assay results from these four holes confirm the continuity of cobalt-copper grades and indicate mineralization extends to depth.

In all four holes, broad zones of lower cobalt grades contain intervals of higher grade cobalt reflecting the abundance of disseminated pyrite occurring as bands within the host sedimentary rocks. In the Waite Zone, hole ICS18-10A intersected a thick section of mineralization, over 25m true thickness. Within the same hole, additional cobalt was intersected in the immediate footwall, 4.9m of 0.28% Co. Similar results exist in most drill holes in this area reflecting the potential for increased tonnage in this area. Hole ICS18-19 was drilled steeply from surface and intersected copper-cobalt in the lower portion of the existing resource model, improving the continuity of the downdip extensions of mineralization in the No Name Zone. Mineralized horizons between the two zones occur over appreciable widths as intersected in ICS18-26 of 9.0m of 0.22% Co. 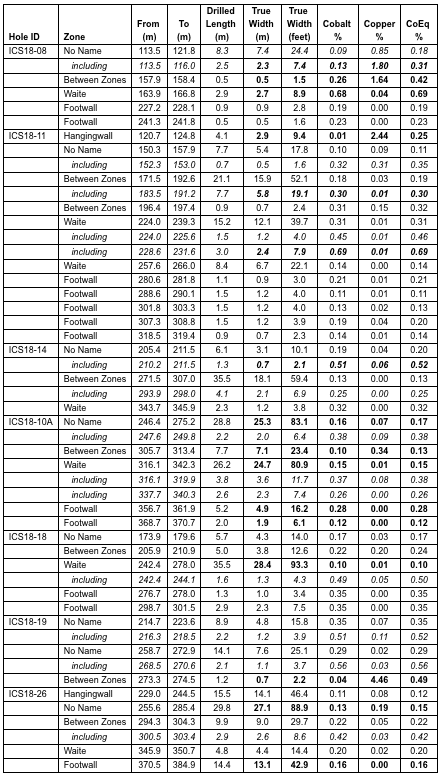 True thickness estimated from 3D geological model also considering drill holes on strike. Cobalt equivalent is calculated as %CoEq = %Co + (%Cu/10) based on US$30/lb Co and US$3/lb Cu. No metallurgical recoveries were applied to either metal as it is expected that the metallurgical recoveries will be similar for both metals. Flotation tests support the Company’s opinion that both cobalt and copper are of sufficient grade to be recovered.

First Cobalt announced on September 26, 2018 an Inferred Resource estimate at Iron Creek of 26.9 million tonnes grading 0.11% cobalt equivalent (0.08% Co and 0.30% Cu containing 46.2 million pounds of cobalt and 176.2 million pounds of copper) under a base case scenario pit constrained and deeper mineral resource. An alternative underground-only scenario results in 4.4 million tonnes grading 0.23% Co and 0.68% Cu (0.30% CoEq) using a cutoff underground grade of 0.18% CoEq and containing 22.3 million pounds of cobalt and 66.7 million pounds of copper. The Inferred Resource is based on drilling over a strike length of approximately 500 metres and a dip extent of over 150 metres. Preliminary metallurgical testing concludes that simple flotation methods are applicable, yielding recoveries of 96% for cobalt and 95% for copper in rougher floatation. Historic underground development includes 600 metres of drifting in three adits and an all-weather road connecting the project to a state highway.

First Cobalt has implemented a quality control program to comply with industry best practices for sampling, chain of custody and analyses. Blanks, duplicates and standards are inserted at the core processing site as part of the QA/QC program. Samples are prepared and analyzed by American Assay Laboratories (AAL) in Sparks, Nevada. Over 15% of the samples analyzed are control samples consisting of checks, blanks, and duplicates inserted by the Company; in addition to the control samples inserted by the lab. Drill core samples are dried, weighed crushed to 85 % passing -6 mesh, roll crushed to 85% passing -10 mesh, split 250 gram pulps, then pulverized in a closed bowl ring pulverizer to 95% passing -150 mesh, then analyzed by a 5 acid digestion for ICP analysis. All samples have passed QA/QC protocols.

First Cobalt is a North American pure-play cobalt company whose flagship asset is the Iron Creek Cobalt Project in Idaho, USA, which has Inferred mineral resources of 26.9 million tonnes grading 0.11% cobalt equivalent. The Company also owns the only permitted cobalt refinery in North America and 50 past-producing mines in the Canadian Cobalt Camp.