First Cobalt Corp. (TSXV:FCC, OTCQX:FTSSF, ASX:FCC) (the “Company”) is pleased to report that drill results from its Iron Creek Cobalt Project in Idaho, USA extend mineralization at depth and demonstrate additional mineralization between the two known zones as well as in the footwall of the Waite Zone.

First Cobalt Corp. (TSXV:FCC, OTCQX:FTSSF, ASX:FCC) (the “Company”) is pleased to report that drill results from its Iron Creek Cobalt Project in Idaho, USA extend mineralization at depth and demonstrate additional mineralization between the two known zones as well as in the footwall of the Waite Zone.

“Today’s results infill and extend mineralization at depth between the eastern and western extents of the known resource area. We also continue to intercept higher grade mineralization between the two main zones. These results confirm the continuity and consistency of mineralization predicted by our geological model and add further support for the development vision for the future of the project as we build towards the updated resource estimate in early 2019.”

Drilling is ongoing to extend the strike length of the mineralized zone from over 500 metres to over 1,000 metres and test down dip extensions of known cobalt-copper zones from 150 metres to over 300 metres below surface. Results reported today include three holes in the central portion of the Iron Creek resource and three holes at the eastern margin of the known resource (Figures 1 and 2).

Surface drilling from the eastern side of the resource continues to intercept higher grades of mineralization in the No Name Zone, including 32.3m at 0.31% Co and 0.31% Cu in ICS18-06B and 21.1m at 0.32% Co and 0.20% Cu in ICS18-05 (true widths), improving the consistency of higher grade cobalt and copper mineralization within Adit#1 where massive sulphides were extracted for metallurgical testing. 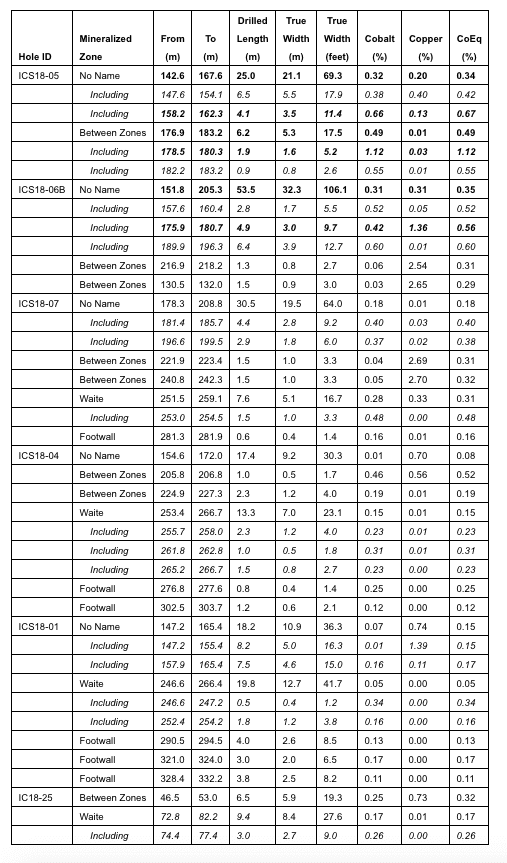 Assay results reported today from the central portion of the resource confirm grade and thickness of mineralization to approximately 50 metres below the known resource area, as well as infilling some gaps where historically, cobalt mineralization was considered sparse and limited to locally disseminated pyrite.

Two underground holes were drilled from Adit#2, IC18-24 and IC18-25, to test the upper portion of the Waite Zone and both returned comparable cobalt and copper grades to those of the Inferred Resource estimate. Hole IC18-24 was included in the September 2018 resource estimate while IC18-25, reported here, confirms grade and thickness of mineralization to approximately 50m below the known resource estimate (Figure 3). Drill holes from surface were designed to test the down dip extension of both the No Name and Waite mineralized horizons. Holes ICS18-01 and ICS18-04 confirm mineralization extends below the current resource estimate and mineralization remains open at depth. At depth, both holes also demonstrate metal zoning with higher grade copper concentrated in the hangingwall and higher grade cobalt in the footwall of the No Name Zone. In the Waite Zone, cobalt is prevalent over copper.

The three holes drilled at the eastern margin of the resource tested cobalt and copper grade as well as thickness of mineralization (Figure 4). Drill hole ICS18-05 encountered lenses of massive pyrite in the No Name Zone as well as immediately below the No Name Zone, with grades up to 1.03% Co over 1.4m and 1.12% Co over 1.6m (true widths) respectively. Similarly, hole ICS18-06B returned a relatively thick interval in the No Name Zone, as noted above. Higher grade copper sulphide lenses were also intersected immediately below the No Name Zone. Both holes infill an area of higher grade cobalt-copper mineralization extending 150m along strike of Adit#1 where massive sulphides were extracted for metallurgical testing. Hole ICS18-07 tested the down-dip extension of mineralization of both recognized zones where only few holes currently exist.

The Iron Creek property consists of patented mining claims surrounded by unpatented mining claims covering an area of 1,698 acres. Significant infrastructure is in place to support multiple drills and underground activity. Historic underground development includes 600 metres of drifting in three adits and an all-weather road connecting the project to a state highway.

Cobalt-copper mineralization occurs as semi-massive and disseminated pyrite and chalcopyrite along stratabound bands within finely layered meta-sedimentary rocks consisting of interbedded argillite and quartzite. Thin veins of sulfide minerals also cut the bands and meta-sedimentary rocks. Quartzite units make up the hangingwall and footwall to the mineralized meta-sedimentary horizon. This stratigraphic sequence has been mapped at surface and by drilling to extend along strike for at least two kilometres. The principal mineral assemblage consists of pyrite, chalcopyrite, pyrrhotite, and magnetite with much lesser quantities of native copper and arsenopyrite locally.

First Cobalt has implemented a quality control program to comply with industry best practices for sampling, chain of custody and analyses. Blanks, duplicates and standards are inserted at the core processing site as part of the QA/QC program. Samples are prepared and analyzed by American Assay Laboratories (AAL) in Sparks, Nevada. Over 15% of the samples analyzed are control samples consisting of checks, blanks, and duplicates inserted by the Company; in addition to the control samples inserted by the lab. Drill core samples are dried, weighed crushed to 85 % passing -6 mesh, roll crushed to 85% passing -10 mesh, split 250 gram pulps, then pulverized in a closed bowl ring pulverizer to 95 % passing -150 mesh, then analyzed by a 5 acid digestion for ICP analysis. All samples have passed QA/QC protocols.

First Cobalt is a North American pure-play cobalt company whose flagship asset is the Iron Creek Cobalt Project in Idaho, USA, which has Inferred mineral resources of 26.9 million tonnes grading 0.11% cobalt equivalent. The Company’s other assets include 50 past-producing mines in the Canadian Cobalt Camp and the only permitted cobalt refinery in North America capable of producing battery materials.