Zambia is part of the Central African Copperbelt, which is home to some of the richest and most plentiful deposits of copper-cobalt in the world. 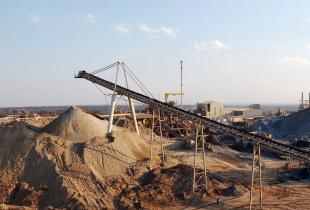 Zambia is part of the Central African Copperbelt, which is home to some of the richest and most plentiful deposits of copper-cobalt (Cu-CO) in the world. The majority of the Copperbelt lies in the Democratic Republic of Congo (DRC), a massive country which continues to suffer from disorganization in government administration. A long and precarious relationship with its vast mining sector in the DRC is now sending many foreign-owned companies looking to Zambia as more viable alternative.

At 19.7 percent of the global supply, Zambia is the world’s second-largest producer of copper-cobalt, next only to neighbouring DRC, who supplies about 40 percent. For the past sixty years the Zambian economy has been heavily reliant on the mining of copper and cobalt and despite the positive steps taken to diversify the industrial and manufacturing base, the dependence remains. The mining sector contributed US $822 million to the total export in 2010. Though Zambia does have a low GDP – per capita of US $1,500 – it is substantially higher than the DRC’s US $198.

In April 2010, market research house Business Monitor International (BMI) estimated an average yearly growth rate of 6.4 percent for the Zambian mining sector over the forecast period from 2010 to 2014. The reports states that BMI believes copper and cobalt will remain key production sectors. Cobalt production rose to 2,236 tons in the first quarter of 2011 from 1,989 tons last year, and exports increased to 2,279 from 1,977, said in a recently released report by the Zambian Central Bank.

First Quantum Minerals is one prominent example of a company that is now turning its attention towards Zambia after facing disputes in the DRC. In 2009, First Quantum’s KMT operation in the copper-rich Katanga Province was seized by the Congolese government in 2009. Then, in 2009, the company’s Frontier mine was closed by authorities. Both the KMT and Frontier cases are now in international arbitration, in Paris and Washington, respectively. As reported in Bloomberg, the International Monetary Fund even delayed the decision to provide the DRC billions of dollars in additional debt relief at Canada’s request over concerns about the cancellation of mining contracts.

In the mean time, First Quantum has been stepping up production in Zambia, just south of the DRC border with three projects, including the Kansashi copper-gold operation. In spite of the shutdowns, First Quantum has reported an increase in its first-quarter profits compared with a year ago, helped by higher copper prices and lower production costs. The earnings amounted to $2.18 per diluted share for the quarter, compared with $1.69 per diluted share a year ago. First Quantum shares were also up $2.76 at $126.48 mid-May on the Toronto Stock Exchange.

Zambia has also recently been attracting new foreign investors. Mining giants Barrick Gold Ltd. (TSX:ABX) have been showing interest in investing in copper-cobalt projects in Zambia as the market for both these minerals is growing, while companies are having an increasingly difficult time finding new large-scale gold acquisitions.

“Barrick is buying a copper company, so it says a lot about where the market is heading,” said Wayne Atwell, Managing Director of Research with Rodman & Renshaw. “Gold production has been flat since 1997.”