Lead prices are being supported by expectations of tighter concentrate supply due to mine closures and surging demand from China.

Lead prices hit their highest level in six months this week, supported by expectations of tighter concentrate supply due to mine closures and surging demand from China.
LME lead reached $2,422 per tonne on Wednesday (August 9), the most since February, and on Thursday (August 10) was trading at $2,376 in official rings.
“The concentrate market has tightened significantly … It is starting to constrain primary smelter production,” said CRU Group lead analyst Neil Hawkes.
As the chart below shows, lead prices have been surging for the past month, mainly as a result of supply concerns. Zinc mine closures in recent years have impacted lead, which is mined as a by-product; most analysts expect a lead deficit of 50,000 tonnes this year and next. 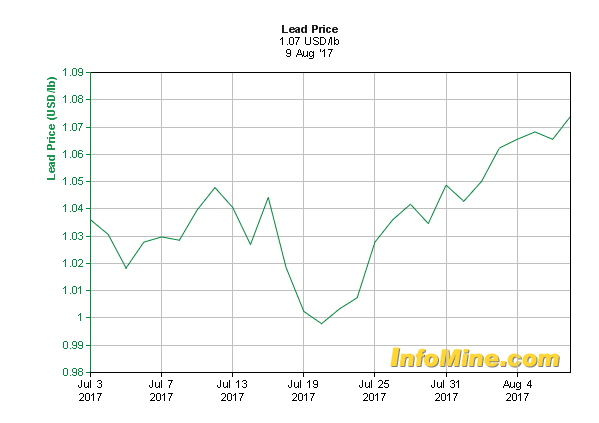 Chart via InfoMine.
“While lead production was solid in 2016, there is a possibility that supply could contract in 2017 as China — a major lead producer — is expected to produce less of this base metal in
an attempt to deal with its pervasive pollution challenges,” FocusEconomics analysts said in a report.
Most recently, China research firm Antaike said that environmental inspections in Sichuan province have prompted 60 percent of of local zinc-lead mines to shut down. That could mean further supply constraints in the next few months.
Another key factor raising concerns is the decline in warehouse stocks. Lead inventories in LME warehouses are down 17 percent since the middle of May, at 153,000 tonnes. What’s more, canceled warrants, which are stocks not available to the market, are down 40 percent.
Meanwhile, demand from top lead producer China is also expected to surge. In fact, China’s net imports of refined lead totaled 52,527 tonnes in the first half of 2017, compared with 1,075 tonnes for all of last year.
“Demand is reasonably good … but what happens with demand in September, October and November will be much more of a test of where we are in the tightening story,” Hawkes added.
Lead prices are expected to remain largely stable during the year, according to FocusEconomics panelists. Macquarie is the most bullish, with a price forecast of $21,900 for the year, while Euromonitor is on the bearish end of the spectrum with a call for $1,924.
Don’t forget to follow @INN_Resource for real-time news updates!
Securities Disclosure: I, Priscila Barrera, hold no direct investment interest in any company mentioned in this article.