The base metal had a strong year, but what’s the lead outlook for 2018? Read on to find out what analysts had to say about the market.

It’s been a strong year for lead prices, which hit a six-year high in October and have been trading near the $2,500-per-tonne-level since then.
This time last year, analysts were predicting an increase in demand, which was expected to result in a more balanced market. However, throughout 2017 the lead market has remained in deficit, with strong demand and tight supply pushing prices higher than many had predicted.
As the year comes to a close, the Investing News Network is looking back at the main trends in the lead space in 2017 and what’s ahead for prices, supply and demand in the new year. Read on to learn what analysts and market participants had to say.

Lead prices have surged more than 24 percent since the beginning of the year on the back of supply tightness and a weaker US dollar.
As the chart below from Kitco shows, the highest point of the year for prices came in October, when LME lead hit a six year-high of $2,620. China’s environmental crackdown along with declining lead stockpiles supported the increase. 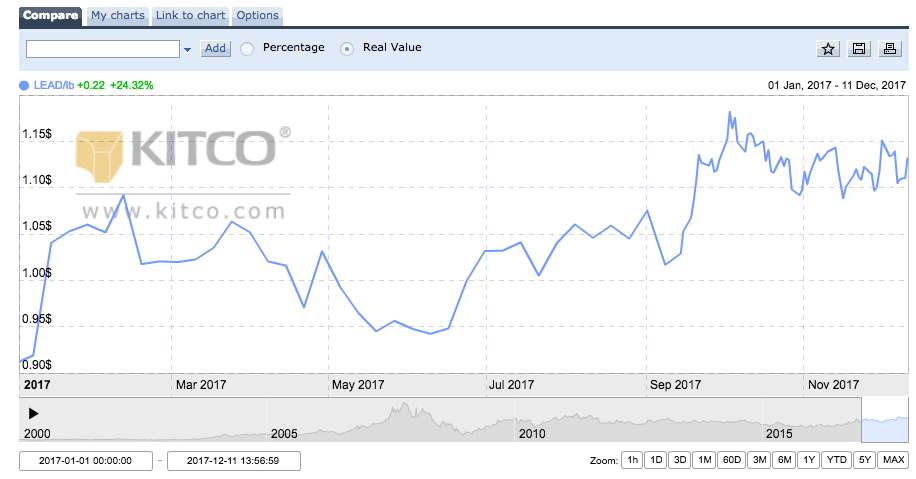 Chart via Kitco.
Meanwhile, lead’s lowest point of the year came in January, when prices were trading at $2,006.50. Geopolitical tensions and a stronger US dollar offset gains for the base metal during that time.
According to FocusEconomics economist Jan Lammersen, the key trend in the lead market this year has been a mismatch in supply and demand, with the latter generally outpacing the former throughout the year. “The underlying fundamentals of the lead market have been strong this year,” he added.
Similarly, analysts at CRU Group said they correctly predicted the direction of lead prices this year, but were surprised by the strength of the rally. “[This was] not just a story of firmer lead industry fundamentals, but also one of broader uplift in metal prices (including sister mining metal zinc), with lead being pulled up by greater investor interest in the tightening metals story,” they said.
In terms of demand, robust car sales in China, as well as solid industrial production data from China, Europe and North America, supported prices.  “Demand from producers of stationary industrial batteries, which use lead, was expected to continue to grow, but turned out to be subdued,” Lammersen explained.
Looking at supply, “the ongoing environmental crackdown in China, which is aimed at solving its pervasive pollution problem, led to disrupted supply chains and decreased Chinese output,” he added.

In 2018, Lammersen expects to see more of the same in the lead market. “Ongoing tightness in the underlying fundamentals and a mismatch in supply and demand will continue to support prices,” he said.
In fact, according to the International Lead and Zinc Study Group, demand for refined lead is forecast to reach 11.82 million tonnes in 2018, while supply will reach only 5.11 million tonnes. As a result, the group expects the base metal to reach a deficit of 45,000 tonnes next year.
CPM Group analyst Yvonne Li also sees the global lead market continuing to experience a deficit of refined supply relative to fabrication demand through 2018. “The deficit is expected to narrow to approximately 50,000 MT in 2018 from around 120,000 MT in 2017,” she commented.

She believes investors should keep an eye on secondary lead’s increasing use in refined lead production. Greater usage of secondary lead for this purpose could help make up for potential losses in refined supply due to mine closures.
“Globally, secondary lead output accounted for 56.4 percent of total refined production in the January-to-August period this year; in developed economies, the percentage is much higher — Germany (68 percent), Spain (100 percent), US (100 percent),” said Li.
She said in China secondary lead is also increasingly being used to produce refined lead, noting, “in the January-to-September period, secondary lead output accounted for 39 percent, an all-time high.”
Meanwhile, CRU Group analysts believe a key factor to watch next year will be how polymetallic miners (those mining lead alongside zinc and silver) respond to higher lead prices and lower treatment charges.

“For now, all eyes are waiting to see if any lead-acid battery-killing weather over the northern hemisphere winter can lift demand to the point of seeing supplies struggling to respond,” they added.
Another main topic in the resource sector this year has been the anticipated surge in electric vehicle (EV) demand, something that could negatively impact the lead-acid battery market.
But CRU Group analysts believe that for now lead-acid batteries will remain the dominant force in powering the vast majority of vehicles worldwide, with the first step toward a global full-EV world being “stop-start” micro HEVs that use lead-acid batteries. “In short, [we] still see plenty of room for lead-acid battery demand to grow alongside lithium-ion batteries until well into the next decade,” they said.

With all of that in mind, what still remains to be seen is whether lead prices continue to increase or if a decrease is just around the corner. “Trends affecting lead prices in the new year are likely to be carried over from this year; supply levels are expected to remain low and will be outpaced by demand,” Lammersen said. According to Li, lead prices are forecast to rise further to an annual average of $2,318 in 2017 and $2,355 in 2018.
Meanwhile, firms polled by FocusEconomics estimate that the average lead price for 2018 will be $2,279. The most bullish forecast for the year comes from Societe Generale (EPA:GLE), which is calling for a price of $2,700; meanwhile, Euromonitor is the most bearish with a forecast of $1,945.

Don’t forget to follow us @INN_Resource for real-time news updates!
Securities Disclosure: I, Priscila Barrera, hold no direct investment interest in any company mentioned in this article.
Editorial Disclosure: The Investing News Network does not guarantee the accuracy or thoroughness of the information reported in the interviews it conducts. The opinions expressed in these interviews do not reflect the opinions of the Investing News Network and do not constitute investment advice. All readers are encouraged to perform their own due diligence.