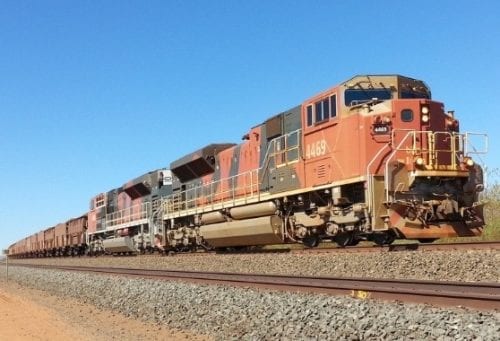 BHP intentionally derailed an iron ore train in the Pilbara on Monday, severing connections between its mines and its shipping terminal at Port Hedland.

Australian iron miner BHP Billiton (ASX:BHP,NYSE:BHP,LSE:BLT) has an almighty mess on its hands, after it was forced to intentionally derail a 268-wagon train in the sparsely populated Pilbara of Western Australia on Monday (November 5).

The train had been travelling between Newman and Port Hedland, and made it to within 119 km of its major shipping terminal at speeds of up to 110 km per hour before it was derailed remotely from Perth.

It was fully-laden with iron ore from the company’s Pilbara iron ore operations, and travelled 92 km without anyone (human or robot) at the helm after the driver “alighted from the locomotive to inspect an issue with an ore car,” according to the Australian Transport Safety Bureau report.

“While the driver was outside of the locomotive, the train commenced to runaway.”

The derailment, which damaged 1.5 km of track and left a mangled pile of wagons and spilled ore, means that BHP’s Pilbara railway connecting its iron ore mines with its shipping terminal is severed.

With 130 workers being sent to clean up the mess and repair the rail, a company spokeswoman told the Australian Broadcasting Corporation that partial rail operations could resume in “about a week.”

Nobody was injured in the derailment.

The company has said it’s unable to calculate how much the derailment will cost in regards to overall repairs and disruptions to iron ore shipments, but it did say that stockpiles at Port Hedland were not enough to meet contractual obligations in the meantime. Most iron ore is shipped to China.

The derailment is a blemish on BHP’s iron ore operations, which are the backbone of the company. In its September quarter results released last month, the company had reported 62 million tonnes of iron ore mined with guidances for the year remaining the same — it had also highlighted “improved reliability across our rail network and port operations.”

Besides the calamity on the railway, all BHP iron ore operations in the Pilbara remain online.

The ATSB reports that its investigation into the incident is estimated to be completed by Q2 in 2019.

On the ASX, BHP was not adversely affected by the news, with the company’s share price slightly up on the day of the news, closing at AU$33.32. Today (November 7), it was trading at AU$33.32.