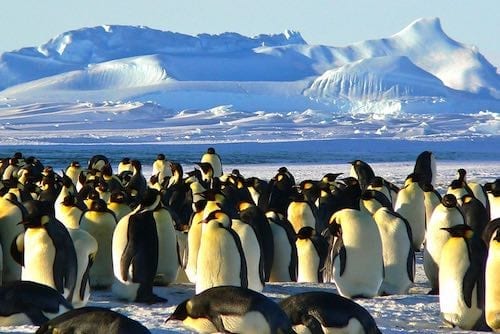 Antarctica’s mineral resources are currently locked up under ice — and under international protocols — but experts say that could change.

Antarctic resources are, for the most part, underneath hundreds of meters of ice, but more countries around the world are taking a closer look at the future potential of the frozen continent.

In a presentation on military opportunities given by a member of the Australian Defense Force, the mineral wealth of the continent was singled out as a major motivator behind strategic competition between nations jockeying for influence and power on the continent, which is locked up under the Madrid Protocol or the Protocol on Environmental Protection to the Antarctic Treaty.

It was declared under the protocol, which was brought into effect in 1998, that “any activity relating to mineral resources, other than scientific research, shall be prohibited.” However, according to the Australian Defense Force, that could well change, and in 2048 the treaty will be open for review.

Under the protocol, Australia’s sovereign claim over 42 percent of the continent is frozen, together with the claims of the six other nations with interests, though Australia’s claim is only recognized by the UK, France, New Zealand and Norway — all of which have claims of their own.

The presentation stated that a major concern for Australia was strategic competition from other nations beyond the Antarctica claimants like China and the US that were establishing bases and using technology that was “dual use,” for scientific and military purposes.

The speaker — who was unnamed — suggested that, together with Australia, other nations were “playing the long game” in setting up camp on the continent to wait for the right conditions to come about for Antarctica to be a viable location for, among other things, mineral resources.

“Perhaps the most important expected driver of strategic competition is the resource potential in Antarctica and the Southern Ocean, and how this interest might increase in the future as resources elsewhere become scarcer,” the report reads. “This is an opportunity that Antarctic nations are fully aware of.”

It conceded, however, that the extraction of these resources — besides being forbidden under the protocol — was unviable under current environmental and economic conditions.

“At this stage, the cost and effort involved in exploring, exploiting, and transporting minerals, oil and gas from Antarctica vastly outweighs any benefit one could obtain from the enterprise. However, this could change.”

Current projections show that the Antarctic ice sheet is melting, with most concerned about it leading to rising sea levels.

The Investing News Network reached out to Gavin Mudd, who is associate professor of environmental engineering at RMIT University in Melbourne, to ask his thoughts on the possible future exploitation of the continent, which has no permanent inhabitants and no settlements that are not research stations.

“I think if the world starts to need to extract resources out of Antarctica there’s something wrong, because we know of plenty of other resources everywhere else,” he said.

“I think Antarctica should be one of those places that we approach like we do our national parks; it’s a special place, leave it alone, keep it as pristine as possible.”

Mudd said that thoughts of exploiting the continent were academic in nature now, and into the near to mid-term future. “(However,) it’s a thought bubble that people are sequencing towards 2048.”

“Why are the Chinese moving in when they’ve never really had much involvement?

“It’s one of the broader issues around Antarctica, because the actual sovereignty has never been formalized. So you’ve got these different claims.”

Mudd said that, no matter the interest in the continent for resources reasons, “(It was) really around being able to get legitimate claims to sovereignty, and if you’ve got resources there then that helps pay for it all.”

On the presentation’s remarks that the continent could become more interesting as time went on due to scarcity, Mudd repeated his stance that there are more than enough minerals around the world to meet global demand.

“Whichever way you look at it, looking at all the different metals, whether its rare earths or cobalt or lithium and all of that — I am very confident that there are lots of global supply options out there that don’t need the Antarctic at all.

“A lot of posturing around Antarctica is really around being able to get legitimate claims to sovereignty, and if you’ve got resources there then that helps pay for it all.”