2016 saw the closures and layoffs at some notable potash mines. 2017 is poised to look much better for the sector.

For the potash sector, 2016 has been a bit of a challenging year in terms of price and oversupply.
Current prices for the fertilizer are sitting at $224 per metric ton in the US Corn Belt, while prices in Brazil are flat at $237 per metric ton, with standard MOP prices at $243 per metric ton.
That said, potash prices across all three have tapered off significantly throughout 2016–although it did find some stability later in the year.
Overall, prices are down approximately 16 percent since last year, but the Economic Calendar suggests “producers are cautiously optimistic” moving into 2017. The chart below is indicative of potash’s price movement over the year. 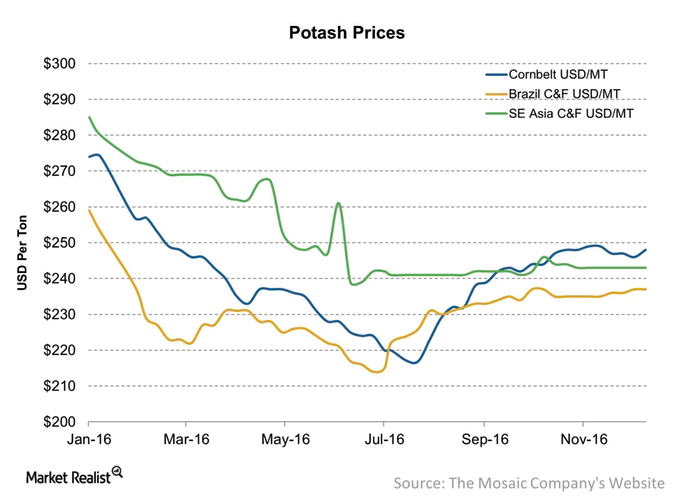 While the end of the year for the potash market looks to be subdued, the Economic Calendar notes that it’s not uncommon for the sector. On that note, the Investing News Network (INN) looked into what impacted the sector in 2016, as well as the potash outlook 2017.

Potash overview 2016: oversupply and mine shutdowns

Unfortunately, oversupply has been a common theme in the potash sector in recent years. Since 2013, the fertilizer has been impacted by increasing competition following the breakdown of the partnership between Uralkali and Belarusian Potash Company. As such, global oversupply of the fertilizer continues to hurt the market–and its price–resulting in layoffs and mine closures in the sector.
For example, PotashCorp (TSX:POT)–the world’s largest producer of the fertilizer in capacity–announced in November that it would be stopping production for three months at its Cory facility beginning in February 2017, laying off 140 employees. Mark Fracchia, the company’s president, said the temporary closure will be done to “optimize production to our lowest cost operations,” which includes the Rocanville site.
In the same release, PotashCorp announced that its Lanigan facility will shut down for six weeks beginning in January, while its Allan facility will shut down for 12 weeks starting in February. The announcement came after the company had previously agreed to merge with Agrium (TSX:AGU) to create an integrated global supply of crop inputs.
Back in July, over 300 workers were laid off from Mosaic’s (NYSE:MOS) Colonsay, Saskatchewan potash mine, due to “challenging potash market conditions.” That said, production is expected to resume in January 2017.
Robin Phinney, president and director of Karnalyte Resources (TSX:KRN) said that with many junior potash companies disappearing, ones that had the money to survive were lucky.
“I was amazed how easy India and China completely destroyed our capital markets for our senior producers of potash,” he told INN. “This should be a lesson learned in the future.”
However, not all was lost in 2016 for the potash sector, as some companies did see progress.
Mike Ferguson, president and CEO of Gensource Potash (TSXV:GSP), told INN 2016 was a “very big year” for the company. In particular, Ferguson told us that the company acquired a new mineral lease in Saskatchewan and signed an offtake agreement for the full planned production from one of its small scale facilities.
What’s more, Gensource entered into a memorandum of understanding with Essel Group Middle East, which Ferguson said will “pave the way to financing the entire construction of the first facility.”

Moving into 2017 and beyond, the potash outlook appears to be much of the same in terms of oversupply, and an increase in demand. Kevin Stone, senior advisor with Natural Resources Canada, said at the 2016 Fertilizer Outlook and Technology conference in November that despite overproduction, the industry is “operating as it has for all but one of the last 15 years.”
Potash demand is expected to grow 2.3 percent from now until 2020, and could grow as high as 36.5 million metric tons by the same year, Stone said.
On that note, the announcement in December 2016 that Mosaic agreed to purchase Vale SA’s (NYSE:VALE) fertilizer assets for $2.5 billion looks to be hopeful for 2017 also. Under the deal, Mosaic will obtain ownership of Vale’s potash assets in Brazil, and a potash project proposed in Saskatchewan currently in limbo.
While the deal isn’t expected to be completed until later in 2017, potash production in Saskatchewan–notably the world’s largest producer of potash–is poised for a liftoff in 2017.
Additionally, Mosaic’s K3 potash mine is expected to begin operations, with the capacity of 21 million ore tons by 2024, and K+S Legacy is expected to begin production at its new mine in the second quarter of 2017.
As noted by Ferguson, Gensource will begin construction of what he says is the first modern potash production plant.
While Canada is the leading supplier of potash, Stone said production overseas could increase in 2017 as well, particularly from Russia. Stone explained that Russian potash facilities operate at 90 percent capacity, versus 65 percent in Canada, which is why he said production could increase from 2017-2020.
In China, Stone said production is expected to rise to 11 million metric tons, while domestic demand will increase slightly over the next five years or so.
With production ramping up next year at some key projects, the potash outlook for 2017 is looking more hopeful than 2016.  As such, investors will surely be keen on how the projects develop in 2017 and the years following.
Don’t forget to follow us @INN_Resource for real-time news updates.
Securities Disclosure: I, Jocelyn Aspa, hold no direct investment interest in any company mentioned in this article.
Editorial Disclosure: The Investing News Network does not guarantee the accuracy or thoroughness of the information reported in the interviews it conducts. The opinions expressed in these interviews do not reflect the opinions of the Investing News Network and do not constitute investment advice. All readers are encouraged to perform their own due diligence.
Gensource Potash is a client of the Investing News Network. This article is not paid for content.