Potash Investing News is trekking around the Four Corners of the United States. In this latest installment, Sid Himmel, CEO and President of IC Potash, gives us a some insight on the company’s New Mexico operations. 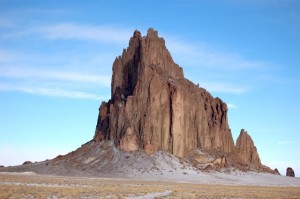 Potash Investing News (PIN) recently had a look at potash mining in Utah’s Paradox Basin as part of its series on the rich soils of the Four Corners in the United States. In this installment, we take a hop to the kitty-corner state of New Mexico. Apart from being one of the top oil– and gas-producing states in the US and notoriously famous for the UFO crash outside of Roswell in 1947, New Mexico is the also the home of North America’s first developed potash deposits.

Potash exploration started in earnest in the US shortly after World War I, when German potash exports were embargoed. Early exploration indicated that potash could be found in both Texas and New Mexico. Potash mining started in New Mexico in the 1920s.

The Mountain State hosts one of the United States’ largest concentrations of known potash reserves in a region known as the Permian Basin. The basin spans from West Texas into Southeast New Mexico. Regular potash (KCl) deposits are a common occurrence in this region; however, the Permian Basin is also known to host significant polyhalite deposits (sulfate of potash, SOP) and langbeinite (sulfate of potash magnesia, SOPM).

In New Mexico, potash investors will find two large-cap mining companies working on developing both regular KCl and langbeinite deposits in the Basin. One of those companies is Mosaic (NYSE:MOS), the world’s second-largest producer of fertilizers. Mosaic has operations in the renowned Carlsbad District in the Permian Basin. Carlsbad is one of the largest underground mines in the US. From this mine, Mosaic has been extracting sylvite (muriate of potash, MOP) and SOPM.

Intrepid Potash (NYSE:IPI) is also operating in the Carlsbad district with several operations. The Company’s West mine opened in 1931 and has a rough estimate of 150 years remaining for underground mining. From this site, the Company is extracting sylvite. From the East mine, which began operations in 1958, the Company is producing both MOP and SOPM.

New Mexico is a very pro-potash mining region with a well-trained labor force and regulators who understand potash extremely well. One company working on developing a New Mexico potash project is IC Potash (TSX:ICP). Sid Himmel, IC Potash’s President and CEO, recently spoke with PIN about the Ochoa project and the Company’s aim to be a low-cost producer of SOP.

Potash Investing News: What makes the Ochoa project different from other projects in the area?

Sid Himmel: There aren’t any large new regular potash projects in the area.  By “regular” I mean sylvite or “Muriate of Potash” which is also called “MOP.”  The reason being is that the regular potash deposits are fairly thin compared to the deposits in Saskatchewan or Russia,  but it does make economic sense to develop a sulfate of potash (SOP) operation because the polyhalite deposit there is probably the best-positioned and most easily accessed polyhalite deposit in the entire world. So that’s what makes it special or different. We’ve got an easily mined deposit and also very low energy costs.

PIN: How is it that IC Potash can become a low-cost SOP producer?

In most cases, if you’re going to make SOP, you have to buy 85 percent of a ton of MOP and 60 percent of a ton of sulfuric acid. You have to add energy and labor and convert it to K2SO4 (sulfuric acid plus the KCl). The bottom line is that if you have to buy almost one ton of MOP and over half a ton of sulfuric acid to make one ton of SOP — you know it’s going to be very expensive. By comparison, most of those guys who produce SOP are just basically industrial players. They make a margin of 10 percent at very high cost.

We have a mineral called polyhalite that contains SOP inside of it. So, therefore, it’s got to be a lot cheaper because we actually have huge amounts of SOP in a mineral. All we have to do is mine it, take it to the surface, crush it, heat it, make it soluble, dissolve it in hot water, precipitate it and you’re done. It’s probably simpler than making a cake.

PIN: That does sound pretty straightforward. How will IC Potash be mining the deposit?

SH: It’s classic room and pillar mining. It’s the simplest mining there is, especially compared to, say, gold or nickel where you’re chasing veins and can have quite a lot of variability in the ores — so, you’re looking for the richer deposits and moving around. Here, the whole thing is the ore. It’s about 6 feet thick, 80 square miles in area and it’s flat. So it’s fairly easy to mine. The grade is about 80 percent polyhalite, so it’s about 22 percent SOP. That’s very, very rich — 22 to 23 percent SOP — that’s very rich.

PIN: Just as a point of comparison, what is an average grade for SOP?

SH: The cheapest production of SOP except for us would be the Salt Lake’s. There you’ve got grades of 0.4 to 0.5 percent. We’ve got rock with a grade of 25 percent; that is  up to 100 times what you have in the Salt Lake.

PIN: Good to know. Now, you’re looking to release your feasibility study in the next four months. What needs to be completed to keep that on target for the project?

SH: Well, right now, most of what we’re doing is costing. There are all kinds of bids out for major pieces of equipment and we’re in the cost-accumulation stage. The detailed engineering is pretty much done. And we’re still doing some confirmation — some electrical proofing and optimization. And final testing, but that’s mostly based on the work of the last two years.

This optimization process is still being done. But most of it, at this stage, will soon just be cost and getting ready to go. We’re looking for the best prices on equipment and the best prices from engineering firms, construction firms — then we’re building the mine and building the plank.

PIN: Is building the mine still on track?

SH: If the financing gets all in place, we will be able to start building in 2014. All of the juniors right now have slowed down in terms of the financing because of, in part, the world’s financial situation, which is very tough for resources right now.

Obtaining the financing for a project of this type takes six months to a year. I’m not going to be able to do it proactively until the feasibility study is completed.

PIN: Now, if all goes according to plan — the ideal scenario if you will — when will IC Potash be starting up production?

SH: If financing wasn’t a problem, we’d be in production by the second or third quarter of 2016. If the financing takes a while, it will take longer. Financing right now can be a  process of at least nine months. Once we get the feasibility study done, and we can really get these large projects put together, you’re talking nine months.

PIN: Well perfect. We look forward to seeing the feasibility study. Thank you Sid, for sharing your insight with us today about SOP and IC Potash.