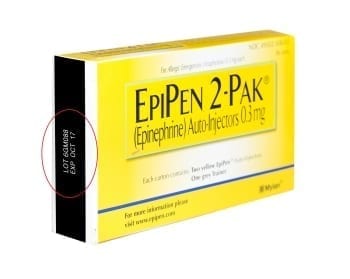 More than 81,000 Mylan EpiPen devices have been recalled by the company resulting from a failure to activate auto-injection.

On Friday (March 31), Mylan (NASDAQ:MYL) expanded its voluntary recall for 13 lots in accordance with the US Food and Drug Administration (FDA) regarding its auto-injectors–the EpiPen and the EpiPen Jr.
According to the company’s press release, the Mylan Epipen recall is being done following the receipt of two previously disclosed reports outside the US that failed to activate the device as a result of a potential defect in a supplier component. This marks the second recall since March 22, when the company announced it had recalled 81,000 EpiPens outside of the US.
The products–which are manufactured by Meridian Medical Technologies, a Pfizer (NYSE:PFE) company and distributed by Mylan–are used for emergency treatments for severe allergic reactions, the FDA states. The recall involves the US, Europe, Asia, as well as North and South America, the FDA notes.


Give me my free report!
With that in mind, Mylan said the recall covers 0.3 mg and 0.15 mg strengths of the EpiPen Auto-Injector that were manufactured between December 2015 and July 2016.
In particular, US recalls include:

On that note, the recalled lots don’t include the authorized generic for the EpiPen Auto-Injector, which is also manufactured by Meridian Medical Technologies, the FDA and Mylan said.
The recall isn’t the only issue plaguing Mylan and the companies behind the EpiPen in recent months–they have also faced heavy criticism due to the steady increase in price for the product.
CNBC reported on Mylan’s decision to classify EpiPen as a generic rather than a branded product, meaning they would pay significantly smaller rebates to state Medicaid programs.
Forbes argued the demand is too large for EpiPen to fail, and the potential life-endangering situation this recall could have on its patients.
With that in mind, the company has now been faced with a lawsuit over the EpiPen pricing. Reuters stated that the federal lawsuit was filed in Tacoma on Monday by three EpiPen purchasers. The publication further states that Mylan “engaged in a scheme with pharmacy benefit managers, or PBMs – companies that act as intermediaries between pharmacies, insurers and drug companies – to dominate the market and overcharge consumers.”
With Mylan’s turn in the spotlight of late not being particularly favourable, it appears to have also impacted its share price. On Monday, Nasdaq reported the company’s shares took a 13 percent hit since its earnings report released a month ago. MarketWatch also noted Mylan’s stock slid 1.3 percent following the voluntary recall.
Even so, Mylan’s stocks marginally increased 0.05 percent over a one-day period to close at $39.01 on Monday.
Don’t forget to follow us @INN_LifeScience for real-time news updates!
Securities Disclosure: I, Bryan Mc Govern, hold no direct investment interest in any company mentioned in this article.