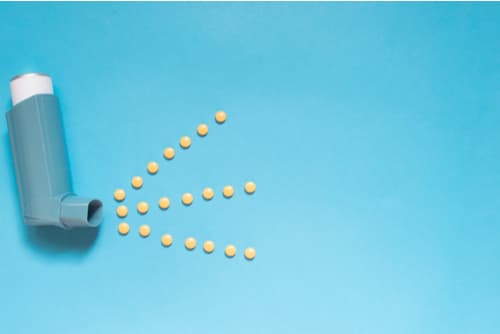 The company’s inhaler therapy, Trelegy Ellipta, has already been approved in the US for chronic obstructive pulmonary disease.

Pharma giant GlaxoSmithKline (NYSE:GSK) revealed on Wednesday (October 2) that it has submitted a new drug application (NDA) to the US Food and Drug Administration (FDA) for its single inhaler triple therapy to treat asthma.

The inhaler, called Trelegy Ellipta, was initially approved by the agency in 2017 for chronic obstructive pulmonary disease (COPD), which is a type of lung disease that leads to a range of breathing problems.

Now, the pharma company is seeking the FDA’s approval to use Trelegy Ellipta in adult patients with asthma following positive Phase 3 trial results reported in May.

“This filing is an important step towards giving asthma patients an additional treatment option,” Christopher Corsico, senior vice president of development at GlaxoSmithKline, said in a press release. “If approved, this filing would make Trelegy Ellipta the first and only single inhaled triple therapy available for both asthma and COPD in the US.”

GlaxoSmithKline’s Phase 3 Captain study of Trelegy Ellipta met its primary endpoint, including an improvement in lung performance. More than 2,400 patients with uncontrolled asthma participated in the trial, which was spread out across 15 different countries.

“We believe a once-daily single inhaler triple therapy that improves lung function is an advance for patients with uncontrolled asthma since this option is not currently available,” Dr. Hal Barron, chief scientific officer and president of research and development at GlaxoSmithKline, said in May.

While Trelegy Ellipta was approved by the regulatory agency in September of last year for various COPD conditions, the company said it has not yet been indicated for asthma or acute bronchospasm, which is when the muscles in the airways of the lungs tighten.

Asthma is a chronic condition that causes inflammation in the airways. Symptoms range from difficulties in breathing to wheezing and coughing to chest tightness.

Although asthma is most commonly diagnosed in childhood, the Center for Disease Control and Prevention estimates that roughly 19 million adults aged 18 and older have asthma — which translates to 7.7 percent of the population — while 6.2 million children under the age of 18 (or 8.4 percent) have asthma. In total, this translates to roughly 25 million people in the US.

Overall, it is projected that one in 13 people in the US have asthma. Since 2017, over 11 million people — including roughly 3 million children — have had at least one asthma attack. It’s also estimated that 10 people per day die of asthma; in 2017, more than 3,500 people died from the condition.

That being said, asthma is treatable and there are a range of companies developing solutions, with GlaxoSmithKline acting as a leader in the space.

Case in point — in September, the company received FDA approval for the first biologic to treat asthma in children aged six to 11 with severe eosinophilic asthma.

“Children with severe eosinophilic asthma currently have limited treatment choices available to them. We believe this important new indication for Nucala is a significant development for these children and their families,” Barron said at that time.

Other companies are also making their presence known in the asthma treatment market. AstraZeneca (NYSE:AZN) is another pharmaceutical giant competing with GlaxoSmithKline with one of its own treatments called Fasenra.

These, of course, aren’t the only options available in the market, but these organizations are two of the most notable companies making a dent in treating asthma.

Looking ahead, a research report from Coherent Market Insights estimates that the asthma treatment market will reach US$20.4 billion by 2026, up from US$17.58 billion in 2018.

In addition to GlaxoSmithKline and AstraZeneca, the research report says other key players in the market include Teva Pharmaceutical Industries (NYSE:TEVA), Sanofi (NASDAQ:SNY) and Roche (OTCQX:RHHBY).

GlaxoSmithKline dipped 2.65 percent over Wednesday’s trading session to close at US$41.19. After-hours trading bumped its share price down an additional 0.19 percent to US$41.11 as of 5:29 p.m. EDT.

Year-to-date, share of the pharma giant are up 11.69 percent.