More than two-thirds of the global omega-3 market is supplied by Peruvian anchovy fisheries; however, these fisheries are near capacity. Hemp, with its perfect ratio (3:1) of Omega-6 to Omega-3 essential fatty acids has the potential to quickly carve out its own niche in the Omega-rich foods sector.

The information contained here is for information purposes only and is not to be construed as an offer or solicitation for the sale or purchase of securities.

The Omega supplement market is one of the fastest growing segments in this sector, valued at USD $24billion in 2011 and estimated to grow at 12% annually. Omega 3-6-9 are essential fatty acids (EFAs) considered “the good fats” by nutritionists because they help burn excess body fat, restore health to the cardiovascular system, relieve arthritis pain and inflammation, and strengthen the immune system.

The vast majority of Omega Market products currently contain omega-3 fatty acids from fish and other marine sources such as krill; however if everyone on the planet were to consume the recommended amount of omega-3 (3 to 4 grams per day) global marine stocks would vanish rather quickly. Close to 85% of harvestable fish populations are “over-exploited, depleted, fully exploited or in recovery from exploitation,” according to a BBC report.

More than two-thirds of the global omega-3 market is supplied by Peruvian anchovy fisheries; however, these fisheries are near capacity. With strong demand growth projected over the coming years, industry leaders like Baldur Hjaltason, strategic business development executive at Norwegian omega-3 supplier EPAX, believe “the industry has a problem it needs to tackle now.”

Most health-conscious grocery shoppers are also environmentally conscious and the reality of declining fish and krill populations has fuelled a push for alternative omega-3 sources.

Many of those same shoppers have begun to incorporate Superfoods—calorie-sparse, yet nutrient dense foods—like kale, flax and quinoa into their diets. And now they are beginning to understand the value of another Superfood: Hemp. While you won’t get “high” from consuming hemp products, your body will get super loaded with valuable nutrients. Hemp is also an ideal alternative source of protein, fiber and omega for those unable to eat gluten, sugar, dairy and nuts.

Hemp, with its perfect ratio (3:1) of Omega-6 to Omega-3 essential fatty acids has the potential to quickly carve out its own niche in the Omega-rich foods sector. Hemp farming is also much more sustainable and environmentally friendly than marine farming offering a solution to the Omega food and supplement industry’s growing supply problem.

Naturally Splendid is the only publicly-traded company in the world offering investors an opportunity to gain exposure to the hemp-based healthy foods and omega markets. The company’s new NateraTM hemp-based product line is currently available across a retail network of stores throughout British Columbia and into Alberta, including: Save on Foods; Urban Fare; London Drugs; Marketplace IGA; and Sobeys. NateraTM Hemp Seeds and Hemp Protein Powders are made with pure, non genetically modified hemp grown sustainably in Canada.

Naturally Splendid has partnered with Boreal Technologies Inc., a privately-owned Canadian company which provides pilot manufacturing and process/product development for omega fatty acids with an initial focus on industrial hemp.

Boreal has developed patent-pending formulation technology for the powder and aqueous forms of edible oil named HempOmega™ and H2Omega™. The two edible oils have been developed to deliver a more targeted and sustained release of Omega oils into the bloodstream when compared to existing Omega oil products. Preliminary testing has confirmed that these products have increased bioavailability and sustainability as well as enhanced shelf stability.

Naturally Splendid and Boreal are working closely together to incorporate HempOmega™ and H2Omega™ into a wide variety of food products. 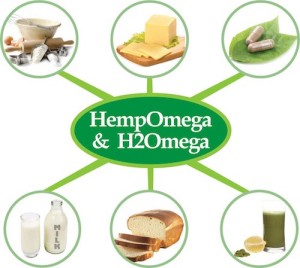 A report covering the Market Study and Economic Analysis for HempOmega™ prepared by two leading experts in the fields of nutrition and food science, and funded in part by the National Research Council of Canada, identifies market opportunities for HempOmega™ and provides Naturally Splendid with a roadmap to introduce the product on a staged timeline.

Using this roadmap, Naturally Splendid has pinpointed a few detailed strategies to market HempOmega™ and H2Omega™:

Under the Naturally Splendid Banner:
Naturally Splendid will continue to develop a variety of proprietary retail products containing HempOmega™ and/or H2Omega™ as ingredients. Naturally Splendid is in the process of finalizing the first generation of products and has already begun initial marketing efforts. The benefits to this strategy include the lack of barriers to market entry and the ability to quickly prove the commercial viability of the products.

Offer the product as a value added ingredient:
Naturally Splendid is introducing HempOmega™ and H2Omega™ to a number of food and beverage companies as a potential ingredient in existing retail lines of well known commercial brands. This Omega enrichment or fortification will enhance the nutritional value and consumer appeal of a wide range of retail food and beverage products.

Secure partnerships with ingredient suppliers:
Naturally Splendid has begun to source and secure international ingredient suppliers who will market and distribute HempOmega™ and H2Omega™ to their clientele. In September 2013, Calico Food Ingredients Ltd., a leading distributor of quality food ingredients to the Canadian Food and Beverage manufacturing industries, began testing and evaluating H2Omega™ and HempOmega™ to best determine the markets and potential clients for these products. Calico offers a wide variety of vitamins and minerals to the food and nutritional markets and believes there is an excellent opportunity to offer the advantages of H2Omega™ and HempOmega™ to their customers looking for an alternative omega source.

Secure partnerships with the food service industry:
Naturally Splendid is consulting with two independent food processing and development facilities for additional product development using HempOmega™ and H2Omega™ as feature ingredients. The work at the independent facilities is also funded in part by a grant from the National Research Council of Canada. 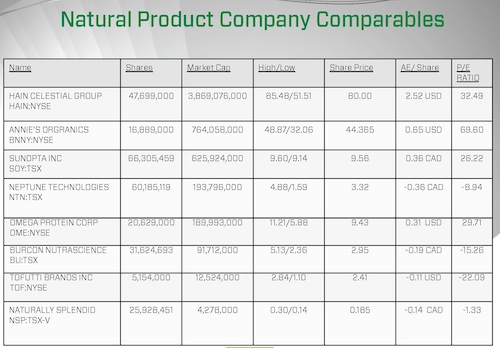