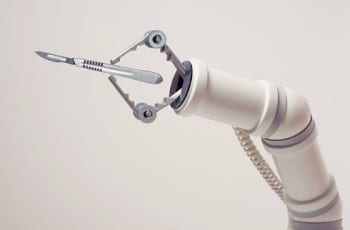 Medical device companies are working on the potential of revolutionizing the surgery landscape with the introduction of robotic support.

The ability of medical research is to provide innovation into things that may appear fine on the surface. To that end, surgery is, overall, accepted as a procedure–with a given degree of risk. Instead of maintaining this current risk, some medical device companies are working to reduce the dangers of going under the knife with the assistance of robotics.
The potential for robotics entering operating rooms across North America and Europe in a significant way comes with the disclosure that many of these new systems keep medical officers in control at all times.
While it could be easy to let the visions of the future run rampant and enter a zone where patients face a seamless process when getting a surgery, that is not the case with this development. Surgical robotics merely aims–for the time being–to support surgeons either for what is known as a multi incision or single-incision procedures.

In an October 2017 interview with medGagdget Dr. Mona Orady, a minimally invasive gynecologic surgeon and director of robotic surgery services with St. Francis Memorial Hospital, spoke on the challenges robotics face as it ramps up its attempt to break into the industry in a more prominent role.
Dr. Orady said there are still restrictions in place for the mass adoption of robotics for surgical support. However, she added the technology is getting better.
“Some of the newer surgical robots that are being developed are smaller, slimmer, and equipped with longer arms to reach the surgery site while allowing the staff to access the patient in an easier way,” Dr. Orady said in the interview.
When Dr. Orady was asked if competitors were bound to arise against the titan of the industry Intuitive Surgical (NASDAQ:ISRG)– company with an astronomical market cap of $41.73 billion–and has seen great success with their da Vinci surgery system, Dr. Orady replied with an emphatic yes.
“It definitely will change… New robotic companies have been working on their robots for maybe 10 years or more,” she said.

Up-and-comer TransEnterix (NYSE:TRXC) struck gold with the US Food and Drug Administration (FDA) as it announced on October 13 that it had been cleared for its 510(k) application for the Senhance Surgical Robotic System.
In an email interview Todd Pope, president and chief executive officer of TransEnterix told the Investing News Network (INN) that this candidate is described as a multiport robotic system which balances the potential of robotic surgery while “enabling surgeons with innovative technology such as haptic feedback and eye sensing camera control.”
Pope asks why only a couple of hospitals and patients get to enjoy the benefits of surgical robotics. He told INN the vision of the company is to make Senhance available in “every OR that is focused on high volume minimally invasive surgery.”
Following TransEnterix’s announcement, many experts and reports quickly viewed the company in direct competition with Intuitive Surgical, which faced an initial, albeit short-lived, decline to its stock after the FDA clearance announcement.

What does this mean for Intuitive Surgical’s competition?

An investor report prepared by RBC Capital Markets analysts Glenn Novarro and Brandon Henry indicated investors would be ready to see the Senhance approval as a slightly negative for Intuitive Surgical, a company they wrote has “maintained a monopoly on the US abdominal surgical robotics since 2000.”
However, Novarro and Henry added they see Senhance as “market-expanding,” which will make it difficult to fully displace the da Vinci system since hospitals have an established relationship and training setup with this system.
Pope said the reason he doesn’t view Intuitive Surgical and TransEnterix in direct competition because his company wants to focus on a different sector of the surgical population.
“Their technology was an improvement to open surgery. We are pioneering a new era in digital laparoscopy,” Pope told INN.
Pope also said one of the major benefit of surgical robotics includes supporting in the reported surgeon burnout effect experienced by the high volume of procedures.
“Research shows there is a startling need to improve the ergonomic conditions for laparoscopic surgeons given the unique physical and cognitive ergonomic challenges they face in the OR,” Pope explained.

Market reception provides encouragement for others waiting for FDA approval

Since the announcement, TransEnterix’S stock has risen 111.56 percent to its current price of $3.11.
“[M]y congratulations to their president Todd Pope and the team at TransEnterix,”David McNally, president and chief executive officer for Titan Medical (TSX:TMD; OTCQB:TITXF) told INN.
Titan Medical is an emerging option in the surgical robotics space and hopes to file a submission with the FDA and respective European regulatory agencies by the end of next year.
“The fact that TransEnterix has succeeded bodes well for others… TransEnterix has proven that it can be done,” McNally said. “The response of the public market in terms of their share pricing increasing following [their approval] is also very encouraging… there are a lot of eyes watching this market opportunity.”

Going back to the above-mentioned medGagdget interview, Dr. Orady identified cost and training as two of the major obstacles facing the current landscape of surgical robotics.
McNally said he agreed with those words and even added the tension between surgeons about letting robots into this area. He doesn’t expect a lot of these classically trained surgeons to change their minds on robotics. McNally points to younger residents in training, as the ones to change and start adapting robotics into their practices.
Against the training process, Titan is working on simulation software alongside their system. McNally said this will accelerate the training process.
“We acknowledge that surgical robotics will not be for all surgeons but we do see it as a growing wave of adoption and one that we believe will grow to meet market expectations in the years to come,” McNally said.
Don’t forget to follow us @INN_LifeScience for real-time news updates!
Securities Disclosure: I, Bryan Mc Govern, hold no direct investment interest in any company mentioned in this article.