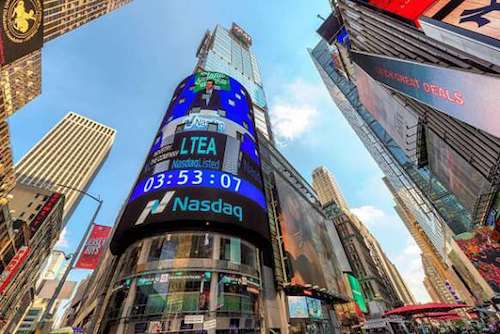 A company getting approval to list to the NASDAQ means a more international reach for Canadian companies listing on the TSX and TSXV.

A company getting approval to list to the NASDAQ means a more international reach for Canadian companies listing on either the Toronto Stock Exchange (TSX) or TSX Venture Exchange.

On Wednesday (April 11) Helius Medical (TSX:HSM; NASDAQ:HSDT) announced that it had been approved for uplisting and priced a public offering. Offering of 2.14 million shares at $7.47 per share, totalling $14.1 million.

The company also said that it intends to use the proceeds to fund activities for its PoNS device, which includes marketing authorization to the US Food and Drug Administration (FDA), preparing for the commercial launch, working capital and more.

The device works by emitting electrical stimulation through a mouthpiece to the tongue stimulating two major cranial nerves. The neural impulses are delivered into the brain stem, which is the main control center for body functions. Researchers believe the stimulation can change major core anatomical components of the brain.

This medical device company is banking on its only product, a portable neuromodulation stimulator device, to help rehabilitate lost functions for millions of people living with chronic disorders.

Helius anticipates the PoNS system regulatory submissions will begin now in the second quarter of 2018 with the FDA, Health Canada, TGA in Australia and the European Commission in Europe. Following these regulatory milestones clinical experience programs will begin in the third quarter and clearance could be received as early as the second half of 2018 to begin generating revenue.

Partners for the system include the US armed forces and TCNL, a neurorehabilitation laboratory at the University of Wisconsin.

Since Wednesday’s announcement, Helius’ share price decreased 5.09 percent to close at $9.51. In the past year Helius hit a price share high of $24.90 around the time the company announced the publication of a stroke study with the PoNS device.

Investors interested in the company should look forward to the milestones mentioned above, meaning 2018  could result in profitable year should the company reach those achievements.