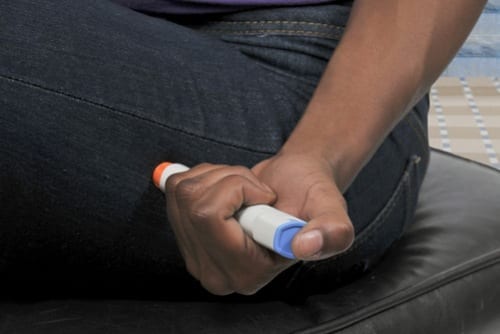 The EpiPen and this generic equivalent are indicated for the emergency treatment of severe allergic reactions.

The EpiPen and this generic equivalent is indicated for the emergency treatment of severe allergic reactions. This includes life threatening anaphylaxis in adults and some pediatric patients.

Teva’s device is made with Antares’ VIBEX auto injector, which was approved as a fully substitutable therapeutic equivalent to the EpiPen by the US Food and Drug Administration (FDA) in August. The press release said the product is currently available in limited quantities.

Robert Apple, CEO of Antares, said this product represents the only other “fully substitutable generic version of the EpiPen.” This is important for patients that haven’t been able to fill prescriptions due to epinephrine product shortages, he added.

In May, Bloomberg reported on the EpiPen shortage and later in August by CNBC, which is still an ongoing issue.

The Investing News Network spoke with Antares’ vice president of corporate affairs, Jack Howarth, to hear more about what the product launch means for the company.

Antares has already accepted around US$22 million from Teva for this partnership. These funds were from supplying the auto injectors from 2016 and 2017 to support the launch of this product, he said.

Howarth added investors can look forward to upcoming revenue from Teva for the auto injectors and royalty revenue from “meaningful” sales on the product. He said this revenue will likely be seen on the company’s Q1 2019 financial results.

Within the terms of the two companies’ deal, Teva is supplying the drug inside of Antares auto injector. Teva is responsible for commercialization and distribution of the product, which Antares will receive royalty revenue for its net sales along with the cost plus margin of the device.

Aside from this deal, Antares has two other deals with Teva for developing products and partnerships with Pfizer (NYSE:PFE) and AMAG Pharmaceuticals (NASDAQ:AMAG). Howarth added a challenge for the company is relying on its partners to get its products approved, which takes time.

This is why the company is also focusing on its proprietary product, XYOSTED, which received FDA approval in early October. The company expects XYOSTED to launch sometime between late-November to early-December.

Howarth said an important goal for the company is building its own pipeline while leaving room for new partnerships.

An important milestone coming up for Antares is the development on its product teriparatide with Teva. This drug is an AB-rated generic to Eli Lilly’s (NYSE:LLY) Forteo. The drug brought in US$1.74 billion in worldwide sales revenue for the company last year, according to its 2017 financial report.

Teva currently has an outstanding abbreviated new drug application for the drug with the FDA, Howarth said. The two companies had legal litigations, which have now been resolved. Eli Lilly believes there’s room for a generic competitor in the second half of 2019, he said.

Additional highlights for investors to look forward to is Antares’ expected revenue increase of US$60-US$65 million for 2018, which would represent a 10-to-20 percent increase from the previous year.

This guidance doesn’t include the company’s EpiPen revenue, Howarth said Antares will provide additional guidance in early 2019 to accommodate this.

Over the trading period between Tuesday and Wednesday’s market close, Antares’ share price increased 3.85 percent to US$3.51.

Based on recent analyst ratings on TipRanks, Antares’ has a high price target of US$8 in the next six months and a low of US$4.50.

Investors are encouraged to stay tuned to Antares news to hear about XYOSTED’s launch and other important milestones mentioned.