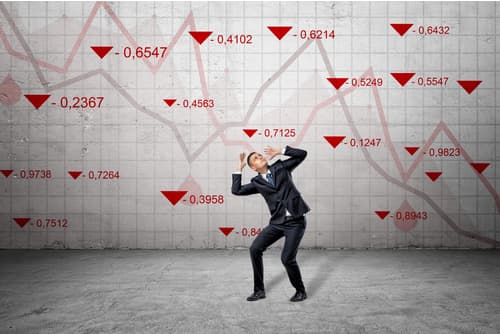 Shares of Cyclerion Therapeutics fell nearly 80 percent after it announced that its Phase 2 trials did not meet their primary endpoints.

Shares of Cyclerion Therapeutics (NASDAQ:CYCN) nosedived on Wednesday (October 30) after the company revealed that its two Phase 2 studies of praliciguat — an “orally available systemic sGC stimulator” — did not meet their primary endpoints.

According to a press release, in the first Phase 2 study for diabetic nephropathy, praliciguat did not show that it improved a reduction of albuminuria — what the protein albumin is called when it is found in urine instead of blood, the only place it should be — when compared to a placebo.

The other Phase 2 study of praliciguat in patients with heart failure with preserved ejection fraction (HFpEF) also demonstrated that it did not meet its primary endpoint.

Following the announcement, shares of Cyclerion dropped nearly 80 percent to close the trading session at US$2.75 on Wednesday. After-hours trading bumped its share price back up 1.82 percent to US$2.84 as of 6:01 p.m. EDT.

In a conference call with investors, Peter Hecht, CEO of Cyclerion, said that the company evaluated praliciguat in these difficult-to-treat areas because they lack meaningful treatment options.

In the Phase 2 trial of praliciguat in patients with diabetic nephropathy, Hecht said that while praliciguat didn’t meet its primary endpoint, the treatment was well tolerated among patients and there was a “clear trend towards improvement.”

He continued, “Additional analysis of the data strengthened our confidence of the meaningfulness of that signal and the conclusion that (Cyclerion) may have discovered an important first-in-class medicine for a huge unmet need.”

Over the course of a 12 week period, 156 patients with type 2 diabetes and diabetic nephropathy participated in the trial and were dosed with 20 or 40 milligrams of praliciguat or a placebo.

“We believe praliciguat has the potential to be a first-in-category treatment for patients with diabetic nephropathy,” Mark Currie, president and chief scientific officer at Cyclerion, said on Wednesday. “We look forward to sharing the data with prospective partners.”

However, during the conference call, Hecht explained that praliciguat won’t become a “meaningful therapy” for patients with HFpEF.

“We did see expected blood pressure reductions and generally good safety and tolerability in the study, but the study missed the primary endpoint of improved exercised capacity,” he said, “We didn’t see meaningful trends on that endpoint or other measures of HFpEF symptoms.”

Hecht further explained that the company ended its HFpEF program as a result of this data.

Looking ahead, Hecht said that the company intends to partner on praliciguat and advance its sickle cell disease and central nervous system clinical programs.

Cyclerion remains on track to out-license praliciguat for development and commercialization following the Phase 2 studies. The company intends to slash its monthly expenses by 25 percent, which translates to cutting 30 of its employees, according to The Boston Business Journal.

Cyclerion launched on the NASDAQ in April after spinning off from Ironwood Pharmaceuticals (NASDAQ:IRWD). Since then, shares of Cyclerion have dropped 78 percent.