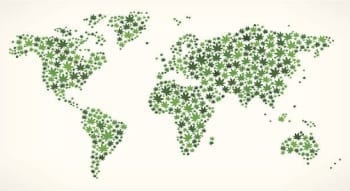 The Investing News Network takes a look at the situation in similar countries where some form of legalization seems ready to establish a market and a potential venue for companies to go international.

It’s hard to ignore the fact that the boom of Canadian stocks as the country prepares for legal recreational cannabis use has been felt on a global scale. In fact,  countries around the world are experiencing similarities to that of Canada where some form of legalization seems ready to establish a market and a potential venue for companies–particularly ones in Canada– to go international.
Alan Brochstein, a cannabis financial analyst with 420 Investor told the Investing News Network in an email the companies that have been the most vocal in their international market aspirations make up for the “bigger players.”
Some of these companies, according to Brochstein include Aurora Cannabis (TSXV:ACB; OTCMKTS:ACBFF) Canopy Growth (TSX:WEED) MedReleaf (TSX:LEAF) and Tilray a private Canadian licensed producer (LP), a producer recognized by the country’s health regulatory agency, Health Canada.


Give me my free report!
Other Canadian companies with international capabilities are Cronos Group (TSXV:MJN), through Peace Naturals, CanniMed Therapeutics (TSX:CMED) and Maricann Group (CSE:MARI). “Germany is the big market,” Brochstein said, adding that while Australia is an interesting option it currently is “very limited.”
“[D]etails aren’t out about the potential program for Mexico, so it’s premature to speculate on the potential of that market,” he said.
As such, here the Investing News Network (INN) takes a look at what countries around the world are taking steps for legalization and that Canadian companies may be able to find themselves fitting in with on a global scale.

The current situation in the US is complicated at best. Overall the drug is technically still illegal in a federal sense, with even the Attorney General Jeff Sessions calling upon the Congress for funding to disrupt the cannabis operations in the country.
“The Department must be in a position to use all laws available to combat the transnational drug organizations and dangerous drug traffickers who threaten American lives,” Sessions wrote in his letter to Congress.
Several states, however, have voted in favor of legalization either in medical, recreational or both. Governors have seen the options from opening the cannabis market in their states and have welcomed it as an option to get rid of illegal drug deals which have caused massive incarceration and most importantly bring in a solid revenue stream through taxation.
During the 2016 presidential election in the US, several more states voted in favour of legalization of some form including Massachusetts, California, Nevada, and Maine.
In a move that seemed like a definite stance against Sessions and the Federal power, the state of California passed a law which protected local users from being targeted from the federal power and prevented local officers from providing any support against such actions.

The European adopted a new law to legalize medical cannabis earlier this year. The “cannabis as medicine” law officially came into effect in March 2017.
As reported by CNN, the Federal Health Minister Hermann Gröhe said the costs of medical cannabis for patients would be “health insurance companies of the critically ill, if no other form of treatment is effective.”
CNN wrote that Germany will create a program to regulate the cultivation of crops in the country, however up until that aspect is ready to go, “plants will be imported.”
A big point of interest for companies seeking the German market is the difference in price. “A gram of cannabis sells at a price between €12 and €20, equivalent to between $18 and $30 in local currency,” wrote The Motley Fool. Another key element is the larger population and the potential for a bigger medical market.

Similar to Germany, this year Australia passed legislation fully legalizing medical cannabis.
The Federal Government has given the green light for approved companies to legally import, store and sell the drug until domestic production meets local needs.
“It has to be safe and we want to make sure this medicinal cannabis is available but on the same basis as any of the serious drugs and medicines that can only be dealt with through prescription and through a very rigorous medical process,” Health Minister Greg Hunt said as reported by News.com.au. That’s where business opportunities come through for Canadian LPs.
Following the change in policy in the United States, the Australian National University noticed a shift in support for full legalization of cannabis.
Alex Wodak, president of the Drug Law Reform Foundation said the support in Australia was lower than the US but it was clear in which direction it was heading.
“In Australia, one of the consequences of making cannabis legal for medical purposes is that people start to ask the question: ‘Why, then, do you have to criminalize the recreational use of the drug?’”

A fairly conservative and traditional country, Mexico has also seen a cultural shift in the use of cannabis, proven by President Enrique Pena Nieto’s change towards legalization. The country has effectively made medical cannabis legal and could be exploring a path towards full legalization, like many of the other locations listed before.
The Investing News Network (INN) had reported the options for Canadian companies and LP’s in the Mexican market took a more laid-back approach according to one expert.
“You will definitely see interest in companies right away in exporting to the Mexican market and to aiding those companies there in getting things set up,” Aaron Salz, an advisor with Stoic Advisory told INN.

The move by Pena Nieto will make it so marijuana products in Mexico will only be allowed as long as it contains 1 percent or less tetrahydrocannabinol (THC)– one of the main psychoactive ingredients in cannabis.

Don’t forget to follow us @INN_LifeScience for real-time news updates!
Securities Disclosure: I, Bryan Mc Govern, hold no direct investment interest in any company mentioned in this article.
Editorial Disclosure: Canopy Growth acquired Mettrum Health, a client of the Investing News Network. This article is not paid-for content.