A group accounting for 26 percent of Origin House will stand by the company’s management team and will not accept potential takeover offers.

As cannabis companies face the pressure of external takeovers and demands from the market, a multi-state operator obtained a vote of confidence from shareholders.

On Monday (January 7) Origin House (CSE:OH), formerly known as CannaRoyalty, announced a group of investors amounting to about 26 percent of the company entered a “voluntary voting support agreements” to support the decisions from the executive team.

This move highlights the tensions cannabis companies are starting to face and the decision by many new cannabis ventures to list subordinate shares.

Origin House confirmed it has received “several” offers from public cannabis companies seeking stock-based acquisition deals. As such, management of the company believes “there is a growing risk of hostile takeover activity” for the company.

“We are seeking to protect the Company from opportunistic paper bids designed on taking advantage of shareholders by offering short-term gain while depriving them of the more significant potential long-term value that we are building,” Marc Lustig, CEO of Origin House, said.

The executive added the denominated support agreements will protect shareholders from “opportunistic bids.”

Origin House admitted to approaching the shareholders grouped for the agreements.

Among the investors are Lustig himself, Afzal Hasan, president and general counsel of the company, all board members and shareholders from core business acquisitions, including Alta, Kaya, RVR, FloraCal and 180 Smoke.

However, the company will still consider “bona fide opportunities” as they may present themselves.

Hasan said due to the company’s unique model there is a chance for opportunistic behavior, dictated by the volatility of the cannabis public sector.

The group will vote in favor of decisions recommended by the management team or board members. The investor association will also not accept any takeover bids or offers for the company unless supported by the board.

Additionally, members of this new group are only allowed to sell or dispose common shares of Origin House through the Canadian Securities Exchange (CSE) or other exchanges used by the company.

According to Origin House, these support agreements will be active for a 24-month period.

The market reacted favorably to this decision by Origin House, as the stock finished the day with an 11.29 percent increase in value and a closing price of C$7.69. 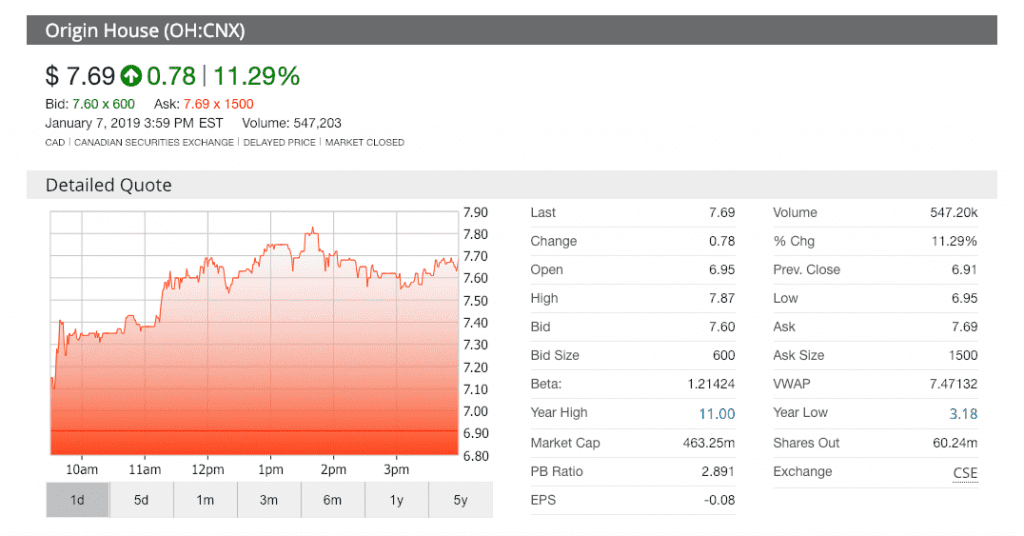 With the key role of volatility in the cannabis space, new cannabis listings have elected to launch publicly with subordinate voting shares, which amount to a less value in voting powers.

A variety of new listings on the CSE have elected to list these shares to still participate in the market but prevent volatility to overtake their vision for the company.

At the time of its initial public offering, Tilray’s (NASDAQ:TLRY) voting powers resided with Privateer Holdings, which according to CBC owns all of the 16.7 million multiple-voting shares and 78 percent of the subordinate voting shares.

Damien Kettlewell, CEO of BlissCo (CSE:BLIS) had previously told the Investing News Network he saw the decision to list subordinate voting shares as a way to protect the path of a company, one based on the strength of the company’s brand.

“From an investors’ side if it is a smaller company that’s trading and they want to have these split shares I would be a little more concerned,” he said.