At the end of the trading day on Wednesday, GTI boasted a quarter-over-quarter revenue increase of 52 percent to US$68 million in its report, driven by growth in its consumer products and retail businesses, the company said.

In its home state, CEO Ben Kovler told investors and analysts during a call that GTI plans to have at least three adult-use retail stores open in Illinois on January 1, 2020, the day the sale and use of recreational cannabis becomes legal state-wide.

Illinois’ upcoming recreational cannabis sector is projected to rival Colorado’s once it finds its footing, raking in a possible U$2 billion a year, according to Marijuana Business Daily.

“The tidal wave of demand you have heard me mention over the last year is about to hit Illinois hard,” said Kovler.

The company also attributed revenue growth to a full quarter of business for its acquisition, Integral Associates, which owns the Essence line of cannabis stores in Las Vegas, Nevada.

Kovler said that medical-only Pennsylvania doubled in size over the last quarter, further contributing to the firm’s revenue growth.

GTI reported a reduction in its net loss for the third quarter to US$17.1 million from the US$22.2 million reported in Q2 2019. Earnings before interest, tax, depreciation and amortization hit US$1.6 million, up from a loss of US$9.4 million from the previous recording period. 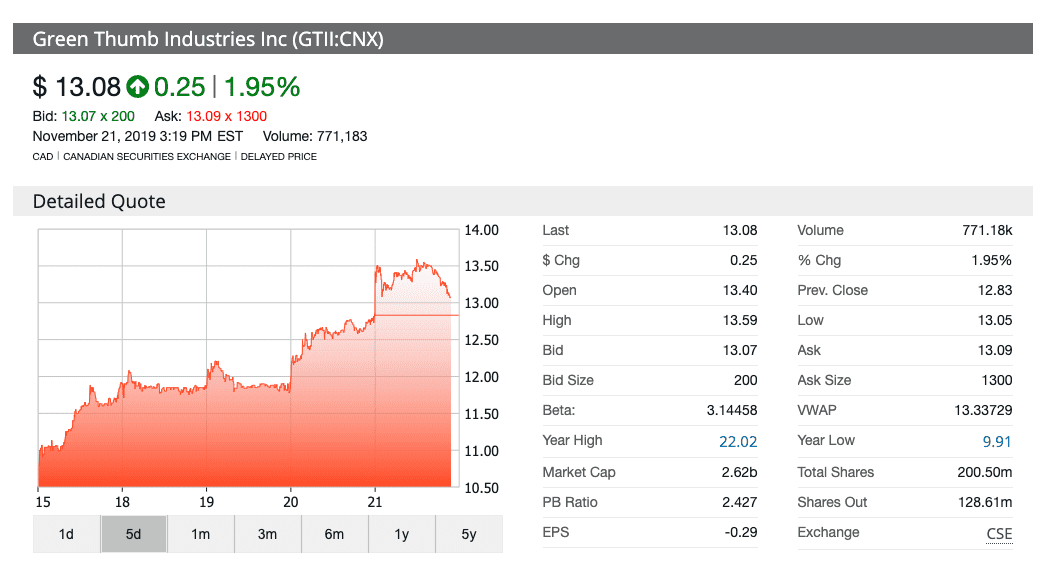 Consumer brands proved to be a boon for GTI this quarter, as branded product sales grew 50 percent in the eight markets it currently operates in, including California, Colorado and Florida.

GTI could come up against problems in one of its other operating states moving into 2020, however. CFO Anthony Georgiadis said that while GTI has a strong presence in Massachusetts, the firm is facing supply issues.

“We could probably service all the stores in the state but the reality is we wouldn’t do a great job because we just don’t have the product available to do so,” said Georgiadis.

Kovler went on to say GTI’s balance sheet, which includes US$66.1 million in cash, along with the firm’s retail operations will help GTI achieve its goal of over US$200 million in total revenue for its fiscal 2019 year.

When asked about the revenue goal, Kovler said retail, as well as cultivation and wholesale production, would be key drivers of growth of the company for the rest of the fiscal year. The executive didn’t specify which states GTI was focused on moving into 2020.