Grown Rogue International Inc. (CSE:GRIN, OTC:GRUSF) (“Grown Rogue” or the “Company”), a vertically-integrated, multi-state cannabis company, with licenses and operations in Oregon, California, and now entering Michigan, has released its financial and operating results for its fiscal second quarter ended April 30, 2019. The Company’s financial statements and management’s discussion and analysis for the period are available on the Company’s SEDAR profile at www.sedar.com or through the Company’s website at www.grownrogue.com. All amounts are expressed in United States Dollars unless otherwise indicated. Certain metrics, including those expressed on an adjusted basis, are non-IFRS measures.

“Our second quarter revenue results are indicative of the brand strength and distribution reach we have achieved in Oregon and we are taking the same platform to California and Michigan,” said Obie Strickler, CEO of Grown Rogue. “The proposed acquisition of Decibel Farms announced in April is expected to increase our manufacturing capacity in Oregon where we continue to enjoy record demand for our products. Our California distribution license went into effect during the second quarter with revenues expected to commence this month.”

Grown Rogue expects to increase its combined annual flower production capacity in Oregon and Michigan from approximately 5,000 lbs (2,300 kgs) currently, to approximately 12,000 lbs (5,400 kgs) by the end of fiscal year 2019 following the anticipated incorporation of Decibel Farms and scaling of its cultivation operations in Michigan. The increased capacity is inclusive of the 40,000 square feet of greenhouse production capacity in Oregon in the proposed Decibel Farm transaction announced in April 2019. Grown Rogue’s anticipated acquisition of the Decibel brand includes Decibel’s “Loud” branded pre-roll which features a unique “painted on” rosin. Grown Rogue plans to introduce this innovative product in the California market in the third calendar quarter of 2019.

“We believe that licenses, assets, and operations are of little value without an experienced team that knows how to cultivate quality cannabis products at scale and build meaningful brands. Our team has been building these core competencies for the past 3 years,” added Jacques Habra, Chief Strategy Officer.

Well-established in Oregon, Grown Rogue has expanded into California and its third state, the highly populated, limited-license state of Michigan through a partnership agreement 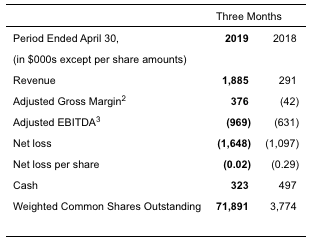 Grown Rogue revenue grew to $1.9 million, a 548% increase from revenue of $0.3 million in its second fiscal quarter ended April 30, 2018, and a 125% increase on a consecutive quarterly basis from $0.8 million in Grown Rogue’s first quarter of fiscal 2019. Organic sales growth are driven through the internal sales force, third party distribution, and strengthening   of the Grown Rogue brand.

The Company’s cash and cash equivalents position was $0.3 million as at April 30, 2019. Subsequent the second quarter the Company completed a CAD $1.5 million debenture financing.

Grown Rogue International (CSE: GRIN | OTC: GRUSF) is a vertically-integrated, multi-state Cannabis family of brands on a mission to inspire consumers to “enhance experiences” through cannabis. We have combined an expert management team, award winning grow team, state of the art indoor and outdoor manufacturing facilities, and consumer insight based product categorization, to create innovative products thoughtfully curated from “seed to experience.”  The Grown Rogue family of products include sungrown, light dep and indoor premium flower, live rosin jars and terp diamonds, infused, indoor and sungrown pre-rolls, live resin and rosin carts, along with chocolate edibles created in partnership with a world-renowned Chocolatier. 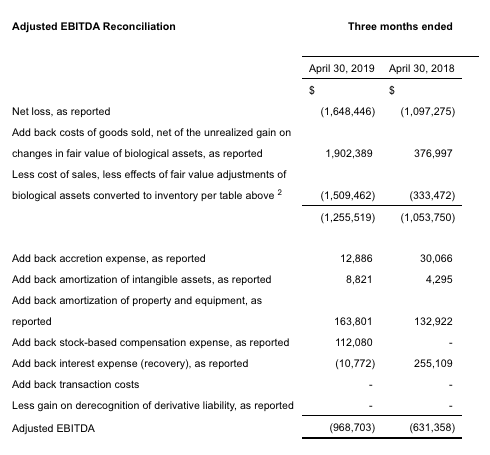 FORWARD LOOKING STATEMENTS
This press release contains statements which constitute “forward‐looking information” within the meaning of applicable securities laws, including statements regarding the plans, intentions, beliefs and current expectations of the Company with respect to future business activities. Forward‐ looking information is often identified by the words “may,” “would,” “could,” “should,” “will,” “intend,” “plan,” “anticipate,” “believe,” “estimate,” “expect” or similar expressions and include information regarding: (i) statements regarding the future direction of the Company (ii) the ability of the Company to successfully achieve its business and financial objectives, (iii) plans for expansion of the Company intoMichigan and securing applicable regulatory approvals, and (iv) expectations for other economic, business, and/or competitive factors. Investors are cautioned that forward‐looking information is not based on historical facts but instead reflect the Company’s management’s expectations, estimates or projections concerning the business of the Company’s future results or events based on the opinions, assumptions and estimates of management considered reasonable at the date the statements are made. Although the Company believes that the expectations reflected in such forward‐looking information are reasonable, such information involves risks and uncertainties, and undue reliance should not be placed on such information, as unknown or unpredictable factors could have material adverse effects on future results, performance or achievements of the combined company. Among the key factors that could cause actual results to differ materially from those projected in the forward‐looking information are the following: changes in general economic, business and political conditions, including changes in the financial markets; and in particular in the ability of the Company to raise debt and equity capital in the amounts and at the costs that it expects; adverse changes in the public perception of cannabis; decreases in the prevailing prices for cannabis and cannabis products in the markets that the Company operates in; adverse changes in applicable laws; or adverse changes in the application or enforcement of current laws; compliance with extensive government regulation and related costs, and other risks described in the Company’s public disclosure documents filed on www.sedar.com.

Should one or more of these risks or uncertainties materialize, or should assumptions underlying the forward‐looking information prove incorrect, actual results may vary materially from those described herein as intended, planned, anticipated, believed, estimated or expected. Although the Company has attempted to identify important risks, uncertainties and factors which could cause actual results to differ materially, there may be others that cause results not to be as anticipated, estimated or intended. The Company does not intend, and does not assume any obligation, to update this forward‐looking information except as otherwise required by applicable law.

The Company is indirectly involved in the manufacture, possession, use, sale and distribution of cannabis in the recreational cannabis marketplace in the United States through its indirect operating subsidiaries. Local state laws where its subsidiaries operate permit such activities however, these activities are currently illegal under United Statesfederal law. Additional information regarding this and other risks and uncertainties relating to the Company’s business are disclosed in the Company’s Listing Statement filed on its issuer profile on SEDAR at www.sedar.com. Should one or more of these risks, uncertainties or other factors materialize, or should assumptions underlying the forward-looking information or forward-looking statements prove incorrect, actual results may vary materially from those described herein as intended, planned, anticipated, believed, estimated or expected.

Click here to connect with Grown Rogue (CSE:GRIN) for an Investor Presentation.