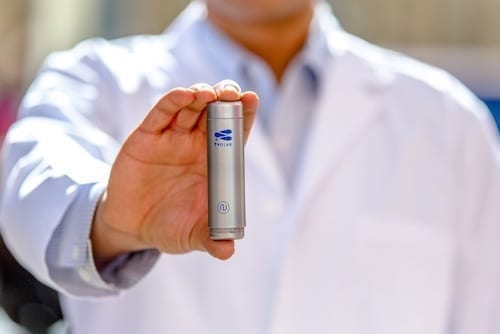 NanoSphere Health Sciences and the cannabis producer have announced an agreement for the development of a patented delivery system for medical cannabis in Canada.

A drug company has announced a partnership with a cannabis producer to bring a novel transdermal and intranasal delivery system for medical cannabis.

NanoSphere Health Sciences (CSE:NSHS) has entered an initial agreement through which it will hand Delta 9 Cannabis (TSXV:NINE) the exclusive master license for its patented NanoSphere Delivery System for all of Canada.

David Sutton, president and chief operating officer of NanoSphere, told the Investing News Network (INN) that if completed, the memorandum of understanding between NanoSphere and Delta 9 will be key in getting the delivery system approved by Health Canada.

“[Delta 9] has a good relationship with Health Canada, and our product in its current form wouldn’t be sellable without Health Canada’s approval,” David Sutton said. “We really feel that they have the ability to help get that through that process.”

David Sutton said he expects the application process for the drug delivery method with Health Canada to begin even before the deal between the two companies is finalized. When asked when he expects it to receive approval, the executive told INN he couldn’t say.

“Dealing with government bodies is an unknown environment,” he said.

According to the announcement from the two companies, Delta 9 and NanoSphere will get a 50-percent split of net revenue from eventual sales of the product, sold as the Evolve Formulas brand.

The US-patented delivery system transports the drug through the skin into the bloodstream. The company cites cannabis applications in which patients can obtain “transdermal viscous gels, intranasal products and intraoral products.”

David Sutton explained this process removes the smoking element from medical cannabis and is more effective in treating pain since the delivery method encapsulates THC molecules, allowing safe transport through the skin.

“We hope through our work to eliminate the need for patients to be essentially ‘smoking their medicine,’ and to give physicians a new and important tool to treat conditions that respond to cannabinoids,” said Robert Sutton, CEO of NanoSphere.

Delta 9 will get access to the IP of NanoSphere and will receive training on how to use the delivery system with medical cannabis.

“The lack of a standardized delivery system has been the single greatest impediment for doctors who would otherwise prescribe cannabis for various medical conditions,” John Arbuthnot, CEO of Delta 9 said. Arbuthnot added that the company has not seen anything resembling NanoSphere’s delivery in terms of “safety and precision of dosage.”

David Sutton told INN the formula for the Evolve Formulas products was perfected by NanoSphere after a variety of trials. The formulas are dispensed through a pen-like device in which the user pushes a button to receive the medicine.

Since the partnership was revealed last Tuesday (July 31), Delta 9’s share price has spiked 9.17 percent, reaching a closing price of C$1.32 on Wednesday (August 8). On the other hand, NanoSphere’s share price has declined 2.44 percent since the announcement and closed at a price of C$0.40 during Wednesdays’ trading session.

As cannabis and its use as a medicine become more relevant in Canada, a variety of novel products and methods will begin making their entry into the market.

This partnership shows a drug company with an interest in cannabis aligning itself with a producer that has built a relationship with Health Canada.