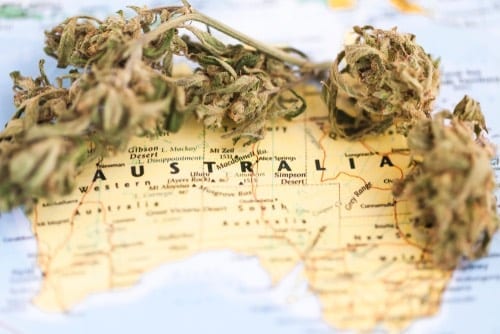 Australia is moving forward with its medical cannabis industry. However, patients still face challenges that affect the entire market.

The growth of the international cannabis industry has led countries across the world to invest and contend for a piece of the market, and Australia is no exception.

The country has expressed its intention to become a world leader in marijuana since medical use of the drug was legalized in 2016. In 2018, the export of medical cannabis was legalized as well.

“We’d like to be potentially the world’s number one supplier,” said Minister for Health Greg Hunt on a local radio station in mid-2018. Considering the country’s robust agricultural sector — it’s valued at AU$58 billion — and its proximity to Asia, a burgeoning cannabis market in itself, Australia could become a powerhouse for the global marijuana industry.

There are some hurdles the country is facing, however, that could hinder the growth of its cannabis industry. Here’s a look at some of the challenges the Australian marijuana market is up against.

Medical cannabis in Australia is under the purview of the Therapeutic Goods Administration (TGA), a regulatory authority that ensures the quality of products such as cannabis.

Save for one cannabis-based product, medical cannabis products aren’t registered as medicine in the country, so patients must use special pathways to access the drug, which can be a lengthy process.

The state is also home to the medical cannabis operations of Cann Group (ASX:CAN,OTC Pink:CNGGF) as well as Spectrum Cannabis Australia, a subsidiary of Canadian cannabis heavyweight Canopy Growth (NYSE:CGC,TSX:WEED).

“Victoria is well and truly the home of medicinal cannabis cultivation in Australia and we’re thrilled yet another global medicinal cannabis company will call Victoria home,” Minister for Agriculture Jaclyn Symes said in a statement issued in February.

“Victoria’s industry will aim to supply half of Australia’s market for medicinal cannabis,” the plan reads. “This is an ambitious goal, but would mean that by 2028, Victoria could provide medicinal cannabis products to 83,000 of the 166,000 potential patients across Australia.”

Some experts have noted, though, that a lack of market access for local patients could get in the way of Victoria’s ambitions.

“The crux of the problem is, we can’t produce medical cannabis products for our market unless we enable the market (patients) to access those products,” Victoria Legislative Council member Fiona Patten told Marijuana Business Daily this past January.

“Without broader patient approval, we won’t get a production industry off the ground,” she added.

Taxation could also create issues. In Canada, a tax conflict unfolded in February when Canadians for Fair Access to Medical Marijuana called on the country’s federal government to remove the roughly 10 percent tax on medical cannabis before the 2019 federal budget was finalized.

At the time, medical marijuana users in Canada said they had seen their costs jump significantly, forcing them to look to the black market for product. The group said that the 10 percent tax would add hundreds of dollars a year to their medical costs.

There is also a degree of apprehension around prescribing the drug due to a lack of research, according to some members of parliament.

In 2017, the Australian health authority conducted a review of medical cannabis in order to get a better sense of how the drug could be used to help patients; it found that evidence that marijuana is effective in relieving pain for chronic neuropathic pain conditions is “limited.”

As such, the TGA suggested that medical cannabis should only be considered when registered medicine has proven to be ineffective in managing patient symptoms.

More broadly, Australia’s cannabis industry is still tightly regulated across the country, and regulations vary between states and territories.

Some regions, like the Australian Capital Territory (ACT) and New South Wales (NSW), have moved forward to take steps and loosen restrictions on medical cannabis access.

In the ACT, a law that would allow the recreational use and possession of cannabis is currently being debated; in NSW, Hunt said that the state government has “taken a machete” to red tape to allow more prompt access to medical cannabis.

But the measure for legalizing cannabis may have a difficult time being enacted, specifically in the ACT.

One concern is the interaction between the proposed laws and existing Commonwealth laws that supersede territory legislation.

The law being considered would allow people to carry, use and grow small amounts of cannabis, but would still ban selling the drug. Other worries for the policy include definition of ownership as well as deciding where plants can be stored and how to keep cannabis away from those under the age of 18.

Loosening cannabis laws could benefit medical cannabis patients in the country. As it is, almost all of the cannabis in Australia is imported, making it an expensive commodity.

Currently, there’s only one approved medical cannabis product in Australia: Sativex, generically known as Nabiximols, which is used to treat patients with multiple sclerosis.

Despite these and other challenges, Australia’s cannabis market is projected to grow quickly.

A 2018 report from cannabis research firm Prohibition Partners states that by 2028 the country’s medical cannabis market could be valued at AU$3.1 billion, while its adult-use sector could reach AU$8.2 billion.

Australia is also well positioned geographically to access the nascent marijuana market in Asian countries such as South Korea and Thailand, which have both made medical cannabis legal recently.

The Australian cannabis market will continue to be an interesting investing space as grows to maturity.