In addition to the two deposits already defined on the property, Red Pine believes that the Wawa gold project has the potential to host an additional six deposits and has generated a pipeline of several high-priority targets. The majority of the targets rest within the six-kilometer Wawa Gold Corridor, a gold mineralization zone that could be the controlling mineralization structure for the property.

Red Pine tested the continuation of the Surluga deposit to depth in its fall 2019 drill program and is awaiting assay results. The company also initiated a drill program at the newly discovered Cooper structure and conducted some surface exploration work (trenching and channel sampling) around the past-producing Grace-Darwin mine, where Red Pine intersected 23.1 g/t gold over 8.14 meters. Red Pine is currently compiling an internal scoping study that is expected to help guide the future development of the property. In December of 2019, Red Pine closed a brokered private placement for C$3.7 million in order to fund the next round of drilling at its Wawa gold project. As part of the private placement, Alamos Gold Inc. (TSX:AGI) purchased 11 percent of issued and outstanding shares of Red Pine. The purchase gives Alamos the ability to participate in further equity financings of the company and entitles Alamos to name one member of the board of directors along with two members of the newly created exploration committee.

The Red Pine management team also plays a leadership role in two other companies, Honey Badger Exploration Inc. (TSXV:TUF) and MacDonald Mines Exploration (TSXV:BMK), with exploration focus across Canada. Under this structure, the three companies are able to share costs. Additionally, a combined diversified portfolio of materials and regions helps to de-risk the activities of the management team.

The team is also notably invested in the Red Pine, holding five percent of shares. The next largest shareholders are MacKenzie Investments, which has been involved as a shareholder since April 2018, holding 4.4 percent of shares and US Global which holds three percent.

The Wawa gold project is a 6,519-hectare property, of which Red Pine has a 60 percent interest. The property is located two kilometers away from the town of Wawa, Ontario and sits within 40 kilometers of both Argonaut Gold’s Magino deposit and the operating Island Gold mine, now owned by Alamos Gold, following their acquisition of Richmont Mines. 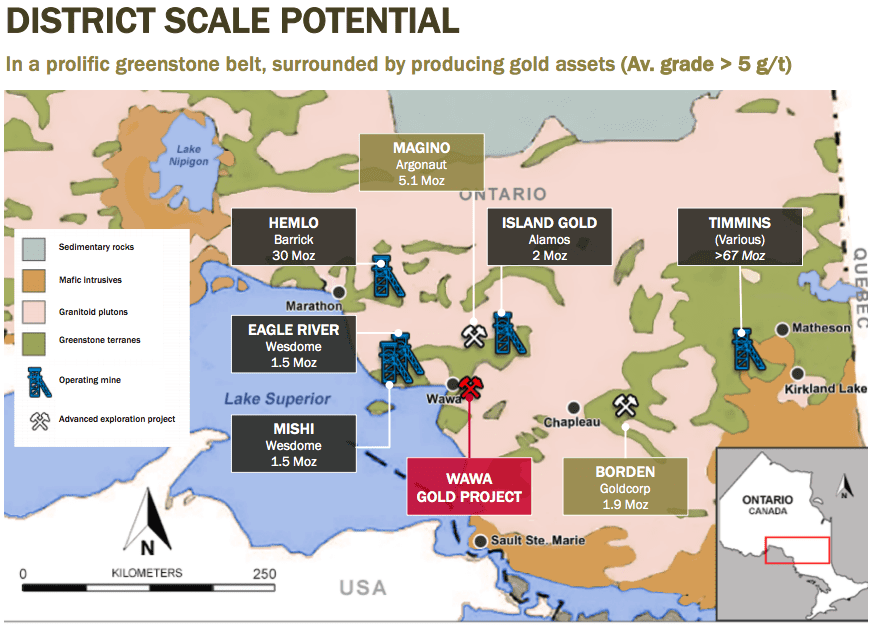 Due to its prominent location in a safe and reliable jurisdiction, the Wawa gold property is supported by established mining infrastructure, an available and skilled workforce and a navigable regulatory system. The property is crossed by a powerline and is near both the TransCanada Highway and the railway, making it easily accessible. Red Pine has also developed its local community relationships and signed a memorandum of understanding (MOU) with the local First Nations groups, Michipicoten, Garden River, and Batchewana.

The new resource estimate contained a significant increase in grade, quality and continuity of the gold zones at Surluga when compared to the 2015 estimate, which has an inferred resource of 19.8 million tonnes grading 1.71 g/t gold when using a 0.40 g/t gold cut-off. The report outlined an underground mining scenario and used a 2.7 g/t gold cut-off grade.

Red Pine released its maiden resource for the Minto Mine South zone in December 2018. The report outlined an indicated resource of 1,307,000 tonnes grading 5.47 g/t gold and an inferred resource of 2,716,000 tonnes grading 5.39 g/t gold. Both deposits remain open at depth. Both the Surluga deposit and the Minto Mine South deposit are included in the May 2019 technical report for the Wawa project.

“We firmly believe in the potential of the Minto project to grow with additional exploration. Our current drilling that supports the resource estimate covers approximately 15 percent to 20 percent of the footprint of the Minto Mine South structure extrapolated within a reasonable level of confidence. This suggests that our initial resource could represent the initial footprint of a larger gold resource in the Minto Mine South project area. Additional potential is also present in multiple zones of the Minto stockwork not included in the resource and in the recently discovered structure parallel to Minto Mine South that was mined in the 1930s in the Parkhill mine,” said Yarie.

Historically, the property has hosted eight past-producing mines, with a collective production of 120,000 ounces. However, these eight deposits were owned by different operators and were never geologically connected. The largest deposit on the property is the Surluga Deposit, which has seen 252 surface drill holes, 1,339 underground holes and has historically produced 8,600 ounces.

Since entering into the project in late 2014, Red Pine released an updated NI 43-101 inferred resource estimate for the Surluga deposit in 2015. Beyond the Surluga deposit, the company has also conducted additional work to determine the resource potential in the remainder of the property. As part of an initial sampling program, Red Pine sampled 146 historic holes and 46 percent of these returned additional gold findings. The samples returned grades of up to 109 g/t gold over 0.86 meters in an unsampled core.

Over the course of 2016 and 2017, Red Pine conducted a broad scale drilling initiative across the property in the areas associated with the past-producing mines so as to develop an updated resource and link the mineralization areas. Part of this initiative led to the discovery of a new high-grade zone in the Jubilee shear, which showed results of up to 14.66 g/t gold over 15.23 meters.

The company’s exploration activities also prompted four other discoveries in the Minto Mine South zone, the Surluga North zone, the Hornblende-William zone and the Grace-Darwin zone, all located across the six-kilometer Wawa gold corridor. 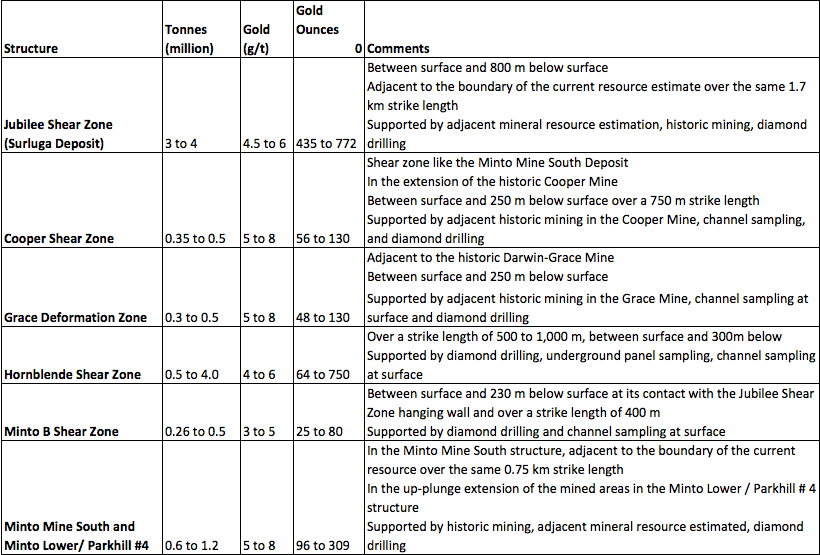 Aside from expanding and confirming zones of mineralization, Red Pine was also able to define a new high-grade structure called Cooper. The Cooper structure resides one kilometer north of the Surluga extension and 2.8 kilometers northeast of the Minto Mine South deposit. The company intersected 0.31 meters grading 27 g/t gold at the structure.

Outside of the drill program, Red Pine also sampled and logged over 13,200 meters of historic core taken in and around the Surluga deposit. Highlights from the program include 0.6 meters grading 14.5 g/t gold, 0.7 meters grading 9.36 g/t gold and 1.74 meters grading 22.8 g/t gold.

In addition to the channel sampling, Red Pine also drilled at the Cooper, Hornblende and Jubilee shear zones. Through drilling, the company was able to extend the down-dip strike to 325 meters at Cooper. Visible gold was observed in four of the holes drilled at Cooper.

At Hornblende, wide zones of quartz veining were intersected and returned intercepts of 73.8 meters grading 0.4 g/t gold including 1.08 meters grading 13 g/t gold. Red Pine also intersected parallel structures with quartz veining and sulfide mineralization between the Jubilee and Hornblende zones. Visible gold was observed in the two holes completed in the deeper extension of the Jubilee shear zone, beyond the footprint of the current Surluga resource.

Red Pine intends to continue exploration at Wawa through an extensive drill program in 2020 designed to extend mineralization at depth on the project. 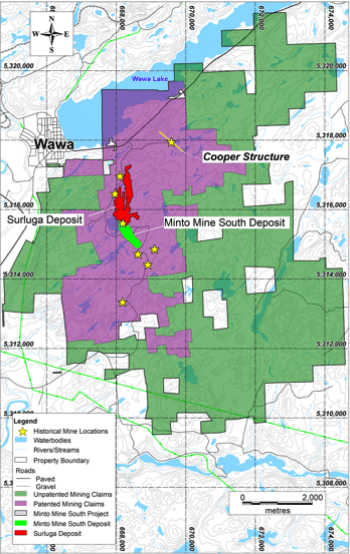 Quentin Yarie is an experienced geophysicist and a successful entrepreneur with extensive project management and business development experience. He was previously the Business Development Officer at Geotech Ltd, a geo-physical airborne survey company, and a Senior Representative of Sales and Business Development for Aeroquest Limited. From 1992 to 2001, Yarie was a partner of a specialized environmental and engineering consulting group where he managed a number of large projects including the ESA of the Sydney Tar Ponds, the closure of the Canadian Forces Bases in Germany and the Maritime and Northeast Pipeline Project. He currently serves as President and CEO for Honey Badger Exploration Inc., and as President and CEO for MacDonald Mines Exploration, both resource exploration companies headquartered in Toronto, Canada.

Mia Boiridy has more than 20 years of corporate management and communication experience. She has been fully involved in Red Pine’s corporate activities as it envisioned the transformation and expansion of the Wawa gold project. She holds a B.Sc. Geology (Honors) as well as a M.Sc. Geochemistry degree from McGill University.

Mr. Duras is a senior executive with over 23 years of experience working in the resource sector in corporate development, financial management and cost control positions. He’s held the position of CFO at several publicly traded companies, including Savary Gold Corp., Nordic Gold Corp and Avion Gold Corp., and spearheaded large corporate financings. He is currently the CFO of Emerita Resources Ltd. Mr. Duras holds a Bachelor of Administration degree from Lakehead University and completed his Chartered Professional Accountant (CPA) designation in 1998.

Drew Anwyll is a mining engineer with over 25 years of international experience in operations start-up, construction and project management of both open pit and underground mines. He was most recently the Senior Vice President Technical Services at Detour Gold Corporation, where he led the strategic work associated with long term planning, exploration, technical and operational oversight of the Detour Lake mine. Prior to this role, he was VP Operations and Mine General Manager at Detour during the construction and initial start-up of the mine. He holds a Bachelor’s and a Master’s degree of Engineering from McGill University.

Andrew Baumen is a mining engineer with over 30 years in the mining industry. He is an innovative leader with recognized achievements in operational open pit and underground mine management and strategic business planning. He was formerly VP of Technical Excellence at Barrick Gold Corp., and General Manager at Barrick’s Hemlo operations. He holds a Bachelor of Applied Science (B.Sc.) in Mining Engineering from Queens University.

Dr. Robert Dodds has over 44 years of experience in the mining industry and has authored 17 scientific articles published in various North American technical journals. He has worked in resource exploration, development and production with various resource companies including, Barrick Gold Corporation, The Kidd Creek mine, Teck Resources Limited, Cominco, The Kerr Addison mine, Noranda Inc. and Diavik Diamond Mines Inc. He acted as Manager and Operator at a gold mine in northwestern Ontario and has provided engineering services for mining operations. He’s held senior management positions with Algonquin Power Utility Corp and was, most recently, CEO of Augustine Ventures Inc. before its merger with Red Pine Exploration.

Peter Kampian has over 30 years of experience in investment management related to electrical generation, manufacturing, securities exchange and public accounting. He is the Chief Financial Officer at Mettrum Health Corp. and the Chief Executive Officer at Edge Financial Consulting Services Inc. He was formerly the Chief Financial Officer at One World Energy Inc. and Algonquin Power Income Fund. He is a Canadian Chartered Accountant and holds a Bachelors of Business Administration Degree from Wilfrid Laurier University.

*Disclaimer: The profile provides information which was sourced and approved by Red Pine Exploration Inc (TSXV:RPX) in order to help investors learn more about the company. Red Pine Exploration Inc is a client of the Investing News Network (INN). The company’s campaign fees pay for INN to create and update this profile page, to which links are placed on Investingnews.com and channel newsletters.